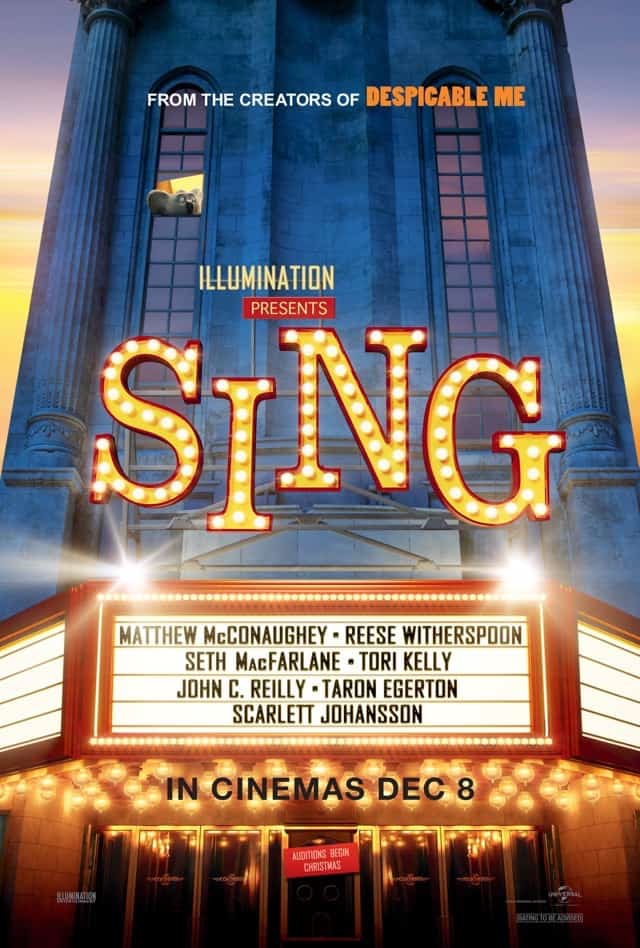 Illumination Entertainment aims to unite all creatures great and small through the power of song in this animated musical comedy. Buster Moon (McConaughey) the koala is running out of options. After a string of flops, the showbiz entrepreneur’s theatre will soon be foreclosed upon. Moon and his business partner Eddie (Reilly) the sheep mount a singing competition to save the theatre. The contestants include harried housewife Rosita (Witherspoon) the pig, the flamboyant pig Gunter (Kroll) who is paired with Rosita, an arrogant jazz crooning mouse named Mike (MacFarlane), punk-rocker porcupine Ash (Johansson), stage fright-afflicted elephant Meena (Kelly), and Johnny (Egerton), a mountain gorilla who goes against the wishes of his criminal father Marcus (Serafinowicz) by pursuing his passion for singing. As Moon seeks the financial assistance of wealthy diva Nana Noodleman (Saunders), Eddie’s grandmother, this motley crew of animal performers must sing to save the theatre.

“Hey, let’s put on a show!” is a stock trope as old as Hollywood itself. To save an orphanage/theatre/hospital/school from being demolished, an unlikely group must draw on their talents and mount a fund-raising production. Babes in Arms, starring Mickey Rooney and Judy Garland, codified this formula. Sing adds funny anthropomorphic animals and top 40 hits to the mix, but the results feel rote. Illumination Entertainment is quickly gaining on the big boys like Pixar and Dreamworks, what with the Minions taking over the world and all. Sing is the studio’s second film this year, following The Secret Life of Pets. Sing is probably Illumination’s most Dreamworks-like film yet, with its celebrity voice cast and surfeit of pop tracks. For a studio trying to set itself apart from the competition, perhaps that’s not the wisest move.

Sing suffers immensely for being released in the same year as Disney’s Zootopia. The design of Zootopia was thoroughly thought through, and each frame was bursting with clever, amusing details to notice. In Sing, anthropomorphic animals are plonked into a non-descript coastal city. While some might appreciate an animated film that isn’t hyperkinetic, Sing lacks dynamism and forward momentum. There’s a nicely staged set piece in the middle and the film’s climax is enjoyable, but Sing lacks the energetic visuals and propulsive pacing of Zootopia or The Secret Life of Pets. For a film with lots of dancing in it, it feels oddly static in parts.

As a tribute to old-fashioned movie musicals, Sing seems half-hearted at best, and the selection of songs isn’t especially inspired. There are shades of A Chorus Line and The Producers, but there’s no thematic cohesion to the musical numbers, and Sing often feels like an animated variety show with a bit of plot tacked on. If you roll your eyes whenever a cheery pop ditty shows up in a Dreamworks movie, prepare to cringe through a good amount of Sing. This reviewer did appreciate that Queen and David Bowie’s Under Pressure makes an appearance, when it seems more likely that the filmmakers would’ve gone with the Under Pressure rip-off Ice Ice Baby.

To accommodate the large cast of characters, most of the arcs are simplistic. McConaughey delivers an amiable, earnest performance, but seems miscast. There’s the dissonance of a Texan drawl coming out of a koala’s mouth – perhaps Hugh Jackman would’ve been a better fit, especially since Jackman has more of a slick, old-school showman vibe than McConaughey does. It might be difficult for kids to care about a character who can’t pay the electric bill to keep his theatre operational – there’s a difference between mature themes and adult worries.

Rosita is the overtaxed stay-at-home mom who struggles to care for her 25 children and jumps at the chance to break out of her routine and embrace her inner diva. It’s a predictable arc and Witherspoon’s performance isn’t distinctive. MacFarlane’s character is smug and self-important, with a penchant for big band jazz – we can’t argue with that casting. Johansson’s Ash is spurned by her boyfriend and is out to prove that she can make it as a solo act – shooting quills into the audience while rocking out is pretty punk. Director Jennings’ cameo as Miss Crawley, a senile green iguana with a glass eye who works as Moon’s assistant, might not be a patch on Brad Bird as Edna Mode in The Incredibles but it has its moments.

The big revelation here is Taron Egerton of Kingsman: The Secret Service fame, who shows off some impressive pipes. We’ve often seen the archetype of a kid who marches to the beat of his own drummer, much to the chagrin of his parents – Johnny the Gorilla is not unlike Lenny from A Shark’s Tale, who wanted out of the mob headed by his father. The Cockney street tough accent sounds right coming out of a gorilla.

If you were moved by Tori Kelly’s rendition of Hallelujah during the In Memoriam segment at this year’s Emmys, you’ll get to hear her sing it again here – never mind that the song is overused. Since Kelly is the one professional singer in the principal cast, it’s a shame that Meena sings as little as she does. Jennifer Hudson, as the younger version of Nana Noodleman, gets to open the film with a soaring rendition of Golden Slumbers, and then is absent from the rest of the film.

Sing isn’t just clichéd, it’s a gathering of lots of clichés in one place. If singing and dancing cartoon animals are all you’re looking for, then Sing has you covered – but then again, the history of animation is filled with singing and dancing animals. Sing has several entertaining sequences and a talented voice cast, but is too generic for its own good.

Summary: You know how this song goes: Sing’s “let’s put on a show plot” doesn’t offer any surprises, and will inevitably be compared to stronger animated films from this year.