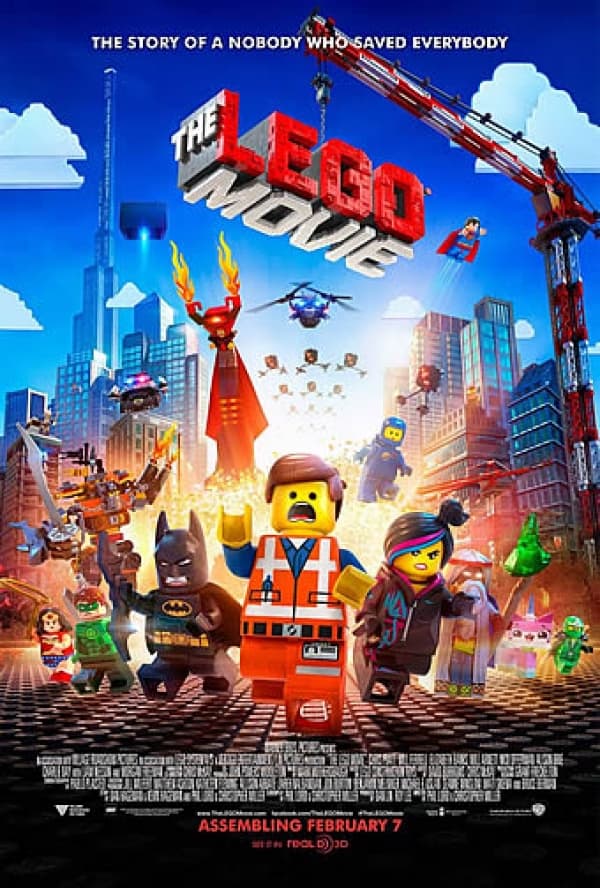 “A movie made to sell toys” is practically always a pejorative description. The Michael Bay-directed Transformers films, the two live-action G.I. Joe movies, Battleship, Batman and Robin…not exactly well-regarded cinematic touchstones. Along comes The Lego Movie, unabashedly, joyously based on the iconic Danish construction toys. Those interlocking bricks have come a long way, the Lego brand boasting sets based on licensed properties, video games, books and magazines, theme parks around the world, apparel and other lifestyle products and now, a theatrically-released major motion picture.

Emmet (Pratt) is your regular everyman – every-mini-figure, rather – who goes about a routine, carefree existence as a construction worker in his hometown of Bricksburg. After accidentally coming across the relic known as “The Piece of Resistance”, Emmet is flung into an adventure alongside the tough, plucky Wyldstyle (Banks), with whom he is immediately smitten. The blind seer and head Master Builder Vitruvius (Freeman) tells him of a prophecy Emmet apparently will fulfil, but he appears so ordinary that nobody buys it for a second. Lord Business (Ferrell), obsessed with order and perfection, plans to unleash a superweapon called the “kragle” upon the Lego-verse and sends his split personality-addled enforcer Bad Cop/Good Cop (Neeson) after Emmet. On their journey, Emmet and Wyldstyle meet the likes of cyborg-pirate Metalbeard (Offerman), the cheery Unikitty (Brie), Benny the 1980-something Spaceman (Day) and Batman himself (Arnett), all of whom must unite to defeat Lord Business.

From 1998 to 2002, Lego’s slogan was “Just Imagine…” and as far as that is concerned, this film walks the talk. Every frame is bursting with invention, directors Phil Lord and Chris Miller marrying humour, wit, heart and dazzling technical artistry to bring those colourful bricks to vivid life. It’s hard to wow us moviegoers, we who stifle yawns upon seeing whole cities levelled for the umpteenth time and yet, The Lego Movie possesses a magic in its look with a real “how did they do that?!” quality to it. Digital visual effects house Animal Logic has produced animation that authentically captures that slightly jerky stop-motion feel, a mind-boggling attention to detail evident in everything from the plastic texture of the Lego pieces and how the older ones are slightly stained to the exact place in which Benny’s helmet is cracked to how everything from an ebbing and flowing ocean to bullet hits is comprised of Lego parts.

Yes, this is a “kids’ movie”, but AFOLs (Adult Fans of Lego) will not feel left out. The cognoscenti will be able to catch rewarding Easter eggs and will realise that this is a film made by people who flat-out love Lego and fully grasp its appeal. There are plenty of opportunities to geek out, from Gandalf and Dumbledore sharing the screen (albeit in mini-figure form) to the DC Trinity of Superman, Batman and Wonder Woman making their big-screen debut a whole two years before Zack Snyder’s Batman vs. Superman. As a bonus, Wonder Woman is voiced by Cobie Smulders, who was apparently Joss Whedon’s pick to play the Amazon princess when he was developing his ill-fated Wonder Woman TV series. The use of irreverent cameos from popular characters here very much recalls what Wreck-It Ralph did with videogame icons and also brings to mind the comedy series Robot Chicken, numerous episodes of which were directed by Chris McKay, co-animation director and co-editor on The Lego Movie.

The “chosen one” plot is one that’s as old as storytelling itself, but Lord and Miller are fully aware of that and have their respective tongues firmly planted in their respective cheeks, while never coming across as smug and condescending. This is in stark contrast to the dull recycling children’s movies like Planes are prone to. There are also some surprisingly thought-provoking themes at play here: Emmet lives in a world run by a totalitarian “benevolent dictator” who has a robot army at his beck and call and controls everything in Bricksburg, right down to the kind of music people listen to. Without giving away too much, the film ends with a (quite literal) deus ex machina, but it is a poignant, brilliant, very meta take on that trope. Of course, there is a level of hypocrisy in the villain being named “Lord Business”, when Lego is a sizeable corporate empire that even has a bricks-in-the-boardroom business consultancy service called Lego Serious Play.

Pulling our heads out of curmudgeon land, it’s worth noting that even an animated film as visually arresting as this one can be downed by a bad voice cast. Crisis averted! Chris Pratt is pitch-perfect as an easy-going nice guy and Elizabeth Banks does sound cool and plucky, but it’s the supporting cast that steals the show. Will Ferrell’s President Business is an interesting display of controlled shouty bluster, never hamming it up to an annoying degree. Yes, Morgan Freeman plays another “magical Negro”, but Vitruvius is a reasonably clever deconstruction (heh) of that character type and his delivery is effortlessly funny. Liam Neeson has kinda-dual roles as the gruff Bad Cop and his meek alter-ego Good Cop, sounding pretty much like regular Liam Neeson as the former but affecting a high-pitched Irish lilt as the latter, the likes of which we have never heard from Qui-Gon/Aslan/Ra’s al Ghul/Zeus before, the results downright hilarious. Will Arnett’s Batman, less angsty, comically self-absorbed, still growly-voiced and altogether very funny, is good too.

When The Lego Movie was announced in 2008, this reviewer was eagerly anticipating the result but also wondering “how in the world are they going to pull this off?” All of those concerns are firmly allayed here, Phil Lord and Chris Miller delivering a picture that endlessly delights, amuses and enchants. It’s a spectacle-filled visual smorgasbord that the tykes will love and is also packed with morsels for geeky older audience members, all while thoughtfully commenting on conformity, creativity and the importance of play. This, Michael Bay, is how you do a toy movie.

Summary: The film’s theme song is a ditty called “Everything is Awesome”, and that’s as apt a description of this superb animated flick as possible.