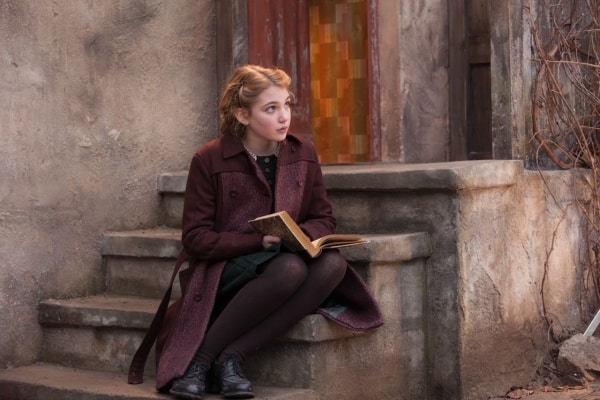 By Joe Utichi
At the heart of Markus Zusak`s uplifting novel THE BOOK THIEF is a curious little girl. Liesel Meminger`s â€œcrime (referenced as a â€œthief in the title) a fascination with books and a desire to amass a collection of her own pales in comparison to those being committed in the world in which she lives. She can`t possibly understand the tumultuous events happening around her, as war breaks out and she learns that a man named Hitler is responsible for tearing her family apart.

But as her foster father, Hans Hubermann, helps her read the pages of the books she`s so keen to take, and when she finds a friend in the Hubermann`s new basement-dwelling houseguest, Max, life begins to change for Liesel. Even in the darkest of times, the Book Thief learns the power of words, and how they can change the world.

In adapting Zusak`s novel for the big screen, director Brian Percival knew that it would take a special kind of young actress to get to grips with the complex sea of emotions that young Liesel experiences over the course of THE BOOK THIEF. He braced for a long search, encompassing thousands of kids from all over the world, in order to find the perfect Liesel. There could be only one out there.

â€œI`d say we saw about a thousand girls worldwide, he explains. â€œWe met some girls in LA, in London and all over Europe. There were self-tapes and casting directors out auditioning right across the world, and we screen-tested a couple of girls from Australia and one from LA.

Like most authors whose work is being adapted for the screen, Markus Zusak wasn`t actively involved in this casting process, though he was often updated about the progress of the search. It was by chance that, as he settled down one evening to watch a French-Canadian film called MONSIEUR LAZHAR, he came face to face with his own character. â€œI remember saying to my wife, â€˜Hey, that`s Liesel.`