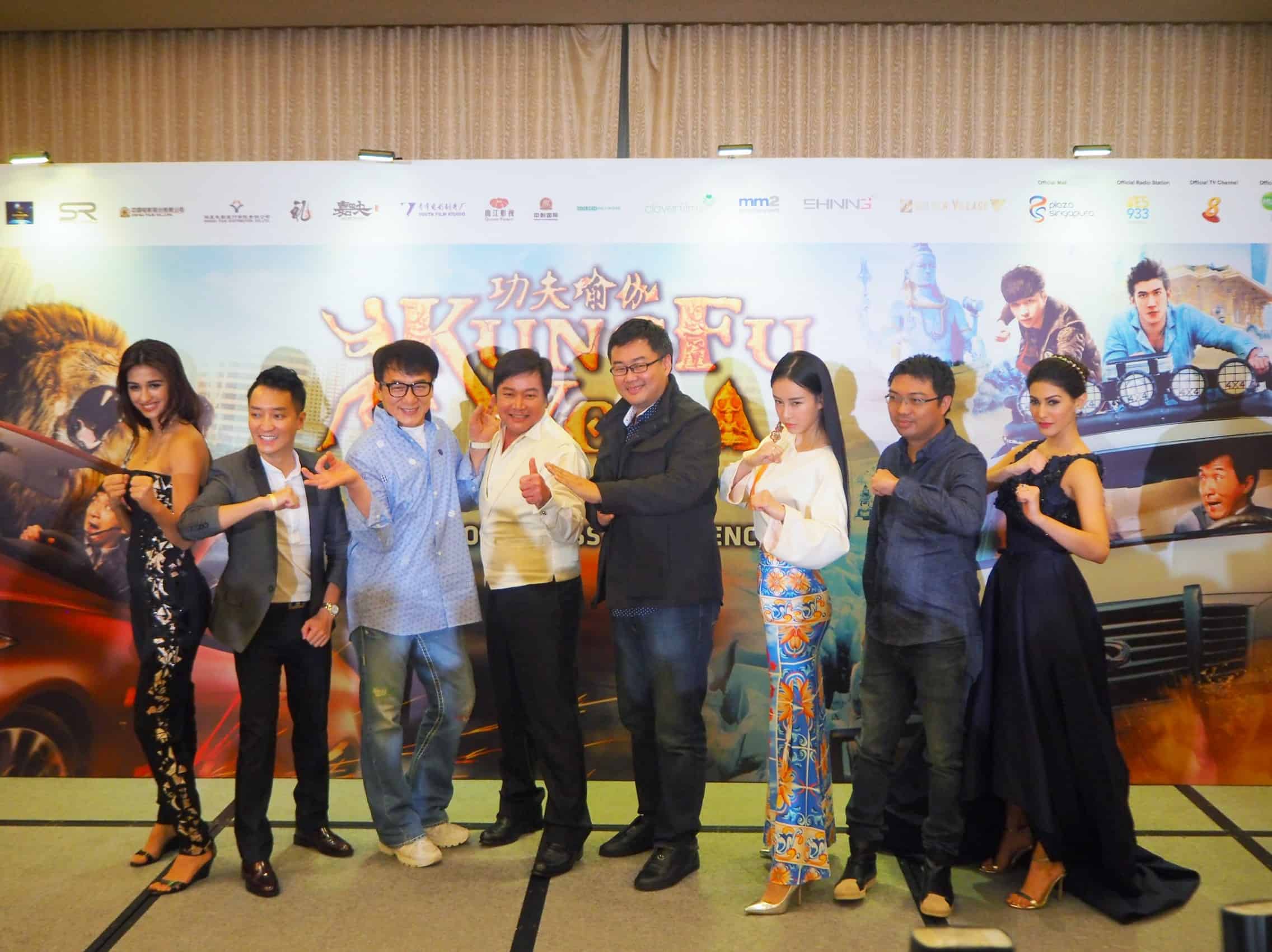 Crashing supercars, almost drowning in Icelandic ice caverns and getting chased by stuntmen pretending to be hyenas is all in a day’s work for Jackie Chan and company. The 62-year-old actor was in town to promote his latest action comedy Kung Fu Yoga. Joining Jackie were leading ladies Disha Patani, Amyra Dastur and Muqi Miya, as well as director Stanley Tong. The group held a press conference at the Equarius Hotel Friday afternoon, ahead of a meet-and-greet session at Plaza Singapura and the film’s gala premiere at VivoCity that night

Kung Fu Yoga also stars Aarif Rahman, Zhang “Lay” Yixing and Sonu Sood. In the film, Jackie plays archaeologist Jack Chen, who is joined by his associates on a globe-spanning odyssey in search of the fabled lost treasure of the Magadha Kingdom. Jack and his team are pursued by the descendant of an ancient militia leader, who claims the treasure rightfully belongs to him. This quest takes Jack and his allies from Xi’an in China to Tibet, to Dubai and to Rajasthan, India.

A prop from the film, a jewelled sceptre called “The Eye of Shiva”, was on display. The piece boasts a pink crystal with 28 facets and was created especially for the production by Swarovski.

2017 marks 25 years since the release of Police Story 3: Super Cop, which was the first of several collaborations between star Jackie and director Tong. These include Rumble in the Bronx, Jackie’s first foray into mainstream American cinema, and the fantasy adventure The Myth, in which Jackie also plays an archaeologist named Jack and which was also filmed partially in India. “I watched his movies growing up,” Tong stated.

“I think everybody watched my movies growing up,” Jackie remarked.

“I never thought I would have to opportunity to help him direct a film,” Tong said. On the cross-cultural elements of Kung Fu Yoga, Tong explained that “Kung Fu represents the culture of China and Yoga represents the culture of India.” He added that both disciplines were not merely about a few moves or poses, but a complete philosophy, which he attempted to incorporate into the plot.

Host Danny Yeo asked Jackie about a medical emergency which Jackie experienced recently. Jackie expressed surprise that Yeo found out about this incident, since it had been kept under wraps. “It’s all Stanley’s fault,” Jackie said to laughter. He explained that after he felt some pain in his abdominal area, Stanley told him it was nothing to worry about, and they carried on filming. While shooting The Foreigner in London, Jackie was ordered to stop work by the on-set medic and was hospitalised. It was discovered that his abdominal skin and muscle had atrophied, and Jackie underwent a five-hour-long operation.

“I tried to get back to work as soon as possible,” Jackie said. Shortly after the procedure, he flew off to Iceland to resume filming on Kung Fu Yoga, where he dived into the frigid ice cavern waters. “I could have paused production and waited a few months to recover, but I knew the whole cast and crew were already on location,” Jackie continued.

Tong tried to delay the shooting of the underwater scenes, but said “you can only tweak the schedule so much, so Jackie persevered.”

Jackie insisted on doing the scene without the help of a stunt double. “I’m still around, thank heavens,” he said to applause.

The 24-year-old Patani was impressed with Jackie’s work ethic. “I think he’s a superhuman and I especially learned a lot from him when I was shooting,” she enthused. “It doesn’t matter how harsh the conditions are wherever we’re shooting, he’s always there before anyone else. He’s always, always up for it.”

Patani had to film the underwater sequence alongside Jackie, who bemoaned how all the safety divers would rush to Patani’s aid, ignoring him. “Everyone went to save her, and nobody went to save me!” Jackie described the harrowing situation, being submerged in cold temperatures and unable to grip the scuba mouthpiece because the hose wasn’t long enough.

“He’s Jackie Chan, he’s super-strong, so nobody really thought about that, that he needs help,” laughed Patani.

“Jackie has filmed for hours with a shark, so I knew he could handle it,” Tong quipped, referring to Police Story 4: First Strike.

Making Kung Fu Yoga was a novel experience for 23-year-old Dastur, who plays the sister of Patani’s character. “My first scene ever was when Stanley threw me into this huge sand pit,” she recalled.
“We had Jackie’s stuntmen being hyenas and they chased after us. It was so funny, imagine guys crawling around the floor in these green little jumpsuits!”

Tong was aware of needing to up to ante to cater to increasingly discerning audiences. “Every film that I’ve made with Jackie has something new in it,” he declared. “There must be an original element, while keeping the action and comedy that have become Jackie’s trademark. Now, the audience is more demanding. If the film has only one setting or a small number of action sequences, audiences will find it boring.”

The film’s central set piece is a wacky car chase through the streets of Dubai. The production had help from Dubai’s princes, who lent the crew their luxury supercars. The stunt drivers ended up crashing Ferraris, Lamborghinis and MacLarens. “I was wondering how we were going to repay the princes,” Jackie mused.

“They didn’t want us to repay them, all they wanted was to have a meal with Jackie and get his autograph,” Tong revealed. “We had crashed a yellow car, and the princes had another car of the same make, but only in blue. So, they repainted the blue car yellow overnight so we could replace the crashed car,” Tong said, praising the royal family of Dubai for being as gracious and accommodating to the film crew as they were.

Due to a mix-up in the schedule, Muqi Miya’s flight was delayed, and she arrived at the press conference late. The model and yoga instructor has been called “the goddess of Yoga”, her steamy pictorials earning her legions of admirers online. “I’m happy to breathe the clean air here in Singapore,” she said, having just gotten off the plane from Beijing. After Yeo called her a “Yoga expert,” Muqi demurred, motioning to Jackie and saying “I have to tell everyone that the real expert is him.”

Is there anything new under the sun for Jackie? “Over the years, I’ve done pretty much everything,” Jackie stated matter-of-factly. “Every year, I have to wrack my brain for how to provide a new experience for my fans.” Jackie described going from the historical epic Dragon Blade to the contemporary action-comedy Skiptrace, and from that to the WWII-era adventure Railroad Tigers and then to Kung Fu Yoga. Jackie promised that his next film, the thriller The Foreigner, will be a serious affair.

Jackie said that he hopes to emulate the long-lived careers of such Hollywood actors as Clint Eastwood, Robert De Niro and Dustin Hoffman. “As I’ve said before, I want to be viewed as an actor who can perform action. I am not an action star,” Jackie declared empathically. “I’m an actor who knows how to do action. The life expectancy of an ‘action star’ is very short.“