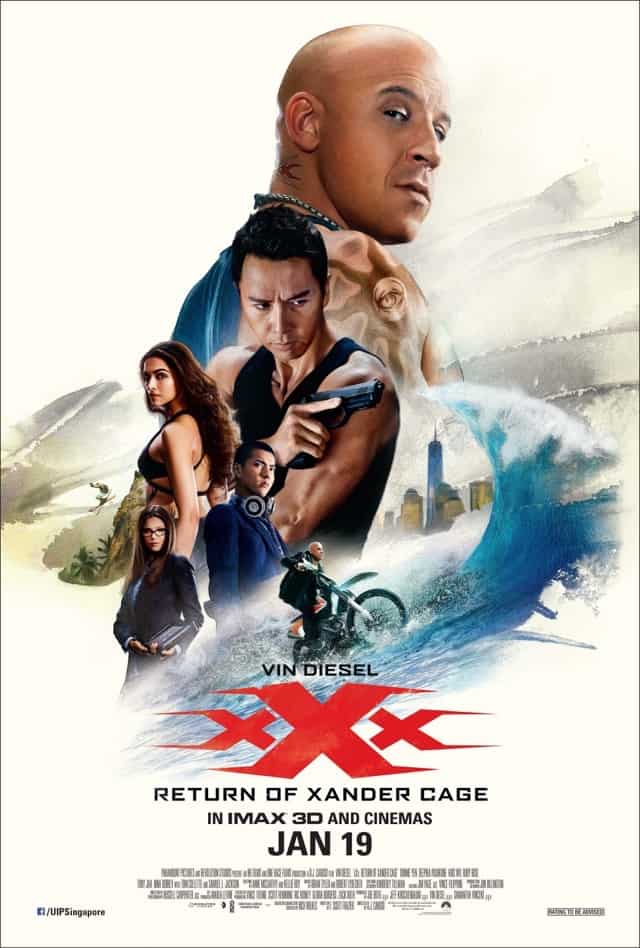 Any action star worth his salt has got to keep more than one franchise going, so get ready for more Diesel-powered action with this continuation of the xXx series. Extreme sportsman and elite secret agent Xander Cage (Diesel) has long been thought dead, but his services are needed again as a new threat emerges. Xiang (Yen) and his team of highly skilled adrenaline junkie operatives have gotten their hands on a device called Pandora’s Box, which can be used to crash any satellite in orbit. NSA handler Jane Marke (Collette) draws Xander back into the fray. Xander calls on his associates, including sharpshooter Adele Wolff (Rose), stunt driver Tennyson Torch (McCann) and deejay Nicks Zhou (Wu) to back him up. They are assisted by tech expert Becky Clearidge (Dobrev). They must face off against Xiang and his team, comprising Serena (Pakudone), Talon (Jaa) and Hawk (Bisping), as Serena questions where her loyalties lie.

F. Scott Frazier’s screenplay bursts with quips and one-liners of varying quality, but at its core lies a generic spy thriller plot: one team of agents has the MacGuffin, and the other must get it back. There’s globe-trotting, car chases and shootouts, as well as shifting alliances and standard-issue plot twists. Then again, nobody’s going to watch this for the plot. There are enough bells and whistles and a spirited embrace of ludicrousness to lift this above the humdrum formula of many a disposable action flick. You will believe a man can ski through a rainforest and that motorcycles can transform into jetskis to ride ocean swells. The visual effects work is surprisingly competent, and the explosive climax doesn’t look conspicuously phony.

Diesel’s Xander allows the star to indulge his ego as a coolly laconic, an anti-establishment rebel who lives life on the edge. This was never a particularly grounded character and Diesel seems aware of that. This time, he has an eclectic ensemble supporting him.

Yen is on excellent form here, the film making good use of his skill set. He’s is charming and menacing as Xiang, but the character is not a moustache-twirling villain and surprisingly, there’s some nuance to him. Yen gets to perform more martial arts here than he did in Rogue One, and he plays off Diesel superbly. Jet Li was originally cast in the part, and it is speculated that he dropped out due to health concerns. We think Yen is a better fit for Xiang than Li might’ve been.

Bollywood starlet Pakudone is counting on this film to help her break into the American market. She’s a serviceable femme fatale, but is far from the most memorable actress to play the archetype.

It’s Rose who steals the show as the smart-alecky sniper Adele. The epitome of cool, Rose seems right in her element whether she’s handling a rifle or hitting on every woman in sight. McCann, best known as Sandor “The Hound” Clegane on Game of Thrones, puts in an amusing turn as the slightly-unhinged Tennyson. Dobrev plays up the ‘adorkable’ shtick for all it’s worth, but borders on grating as the resident tech geek. Out of Xander’s sidekicks, it’s Wu who makes the least impact as Nicks, who serves no apparent purpose on the team. Each character is introduced with a title card listing their special skills, akin to the ones seen in Suicide Squad. Nicks’ just says he’s “fun to be around”.

As the no-nonsense boss lady, Collette delivers her many dramatic declarations with gusto, and appears to be having fun being a part of a big, silly action movie, since she doesn’t do those too often. Jaa has his hair dyed blonde and styled into a faux-hawk, and his role is largely comedic. If there’s any big missed opportunity here, it’s that Jaa isn’t given more to do, and that he doesn’t have a fight scene in which he either teams up with or faces off against fellow martial arts expert Yen. Jackson’s reprisal of the Augustus Gibbons role amounts to little more than a cameo, but there are a couple more cameos sure to elicit a reaction from the audience.