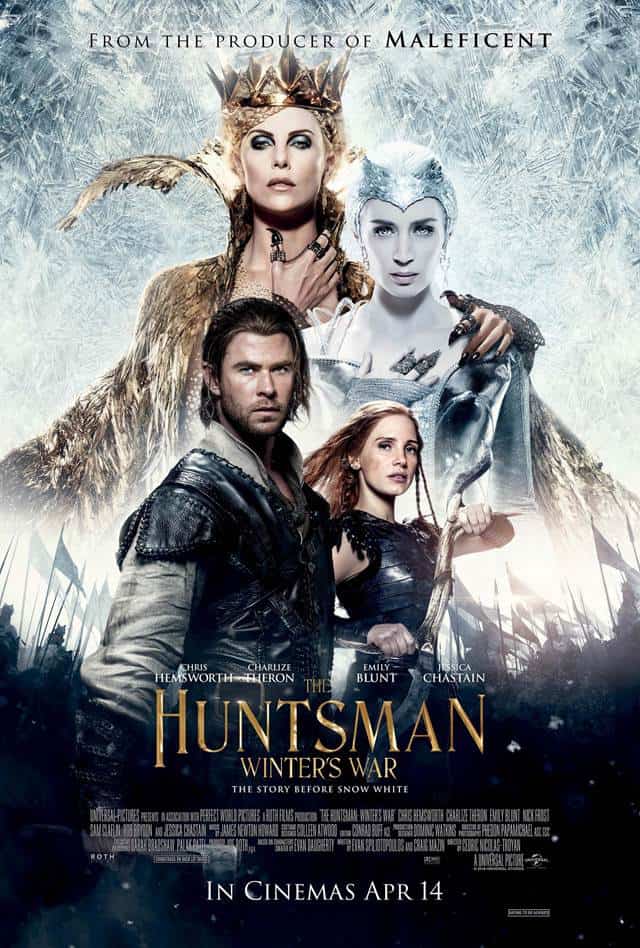 Once upon a time, there was an actress whose indiscretions resulted in her being booted from a potential franchise which she would’ve headlined. So instead, we turn our attention to the deuteragonist. Eric the Huntsman (Hemsworth) was one of a number of children kidnapped and forced into military training, to be groomed into the army of the Snow Queen Freya (Blunt). Defying Freya’s orders that they harden their hearts to love, Eric falls headlong for fellow warrior Sara (Chastain). Many years later, Eric thinks he is free of Freya’s grasp, but when her soldiers threaten Snow White’s kingdom, he has to face the Snow Queen again. Freya has taken the magic mirror, which she uses to resurrect her elder sister Ravenna (Theron), thought vanquished by Snow White and Eric. Joining Eric and Sara in their journey are dwarves Nion (Frost) and Gryff (Brydon). Eric and Sara must face off against the troops they grew up alongside, battling the power of the two sisters. 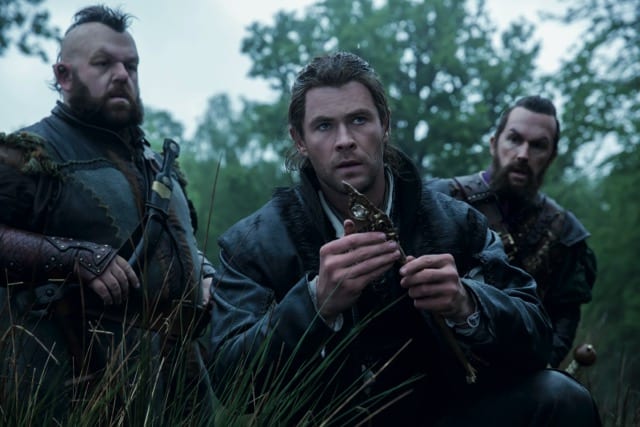 Any studio wants franchises, and Universal is certainly no different. They’ve struck a goldmine with the Fast and Furious series and a new Universal Monsters universe is poised to take shape, but there’s always room for more cash cows in the herd. Alas, the action-fantasy take on Snow White seems a wobbly basis for a juggernaut franchise. When Kristen Stewart was given the boot, so was director Rupert Sanders, with whom she was having an affair. Replacing him at the helm is visual effects artist Cedric Nicolas-Troyan, The Huntsman marking his feature film directorial debut. Frank Darabont was initially set to direct, but he left before production began. 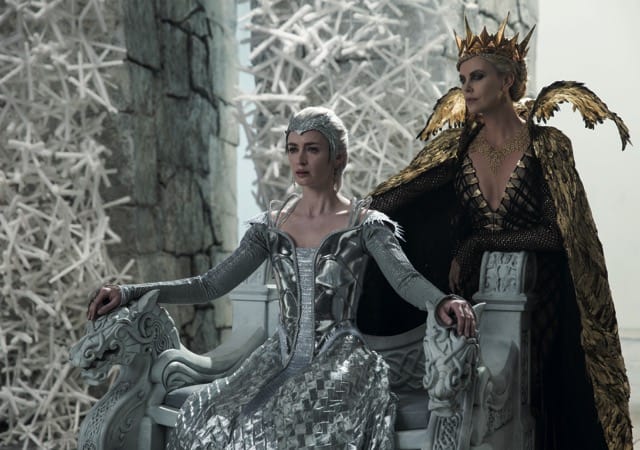 There are certain neat aesthetic ideas on display in the film and returning costume designer Colleen Atwood outfits Freya and Ravenna in a selection of splendid couture creations. Unfortunately, it all tends towards the generic. Where the plot is concerned, palace intrigue and dissention amongst the ranks against a medieval fantasy backdrop is readily available in more sophisticated and arresting forms elsewhere. Yes, it’s more ersatz Game of Thrones – or ‘Game of Theron’s’, if you will. 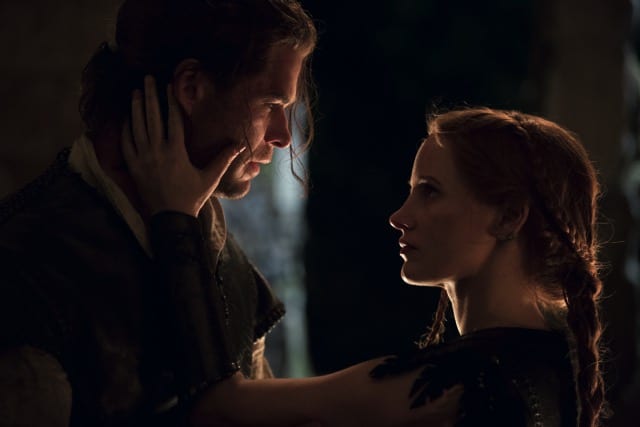 We have a good cast making do with ho-hum material – the presence of Blunt, Theron and Chastain in one movie should have far more propulsive impact than we actually get. But first, the titular Huntsman – for all of Hemsworth’s pulchritude and his ropey attempts at a Scottish accent, the filmmakers seem fully aware that Eric is a patently uninteresting character. We gain precious little from learning the character’s back-story, which is tied into that of the female lead, Sara. Chastain has repeatedly proven that she’s a force to be reckoned with and she kicks plenty of ass in full action heroine mode. But when it comes down to it, a mono-dimensional tough chick who’s totally one of the dudes and doesn’t need no man (or so she tells herself) is not that much better than a damsel in distress. In the cut we saw, a love scene between the two was abruptly truncated – puzzling that the censorship board opted to snip stuff out of a PG-13 fantasy flick that had its Singapore premiere in a theme park. 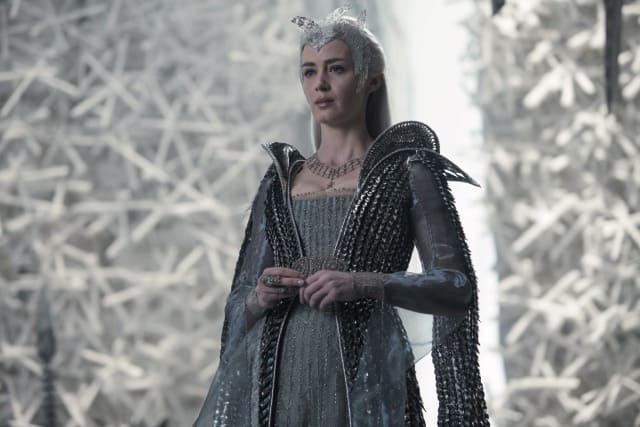 Incorporating the Snow Queen as the villain of the piece was no doubt a result of Frozen’s continued popularity. The Disney animated film couched the character as an anti-heroine, whereas Hans Christian Andersen created the character as more of a villainess. There was a good deal more to Elsa than there is to Freya, cries of “overrated” be damned. Blunt’s talents are wasted; her performance is pretty much a coolly restrained version of Theron’s. She’s not called upon to do very much at all. Speaking of Theron, she was far and away the best part of Snow White and the Huntsman, her ravenous scenery-chewing injecting the dour fantasy action proceedings with considerable excitement. She’s not in this one for very much and the sisterly bond/sibling rivalry between Freya and Ravenna gets insufficient development.

While the effects work involved in shrinking regular-sized actors down to dwarves is as seamless as it was the first time round, the dwarves obviously serve little purpose apart from comic relief and could be excised from the plot without too much consequence. It’s a relief that a fair number of these jokes land.

The action sequences suffer from shaky-cam and choppy editing, so we don’t get to truly appreciate the deadly skill with which Eric and Sara dispatch their enemies. The U.K. locations, including Waverley Abbey in Surrey, Well’s Bishops Palace and Puzzlewood in the Forest of Dean ensure the film does not get swallowed up in computer-generated morass. It’s a shame but perhaps to be expected that the spectacle doesn’t soar and the story ends up flat, the film failing to make a case for its existence. A spot of sequel-begging right at the movie’s conclusion can’t help but come off as desperate; Universal might not get its fairy-tale ending after all.