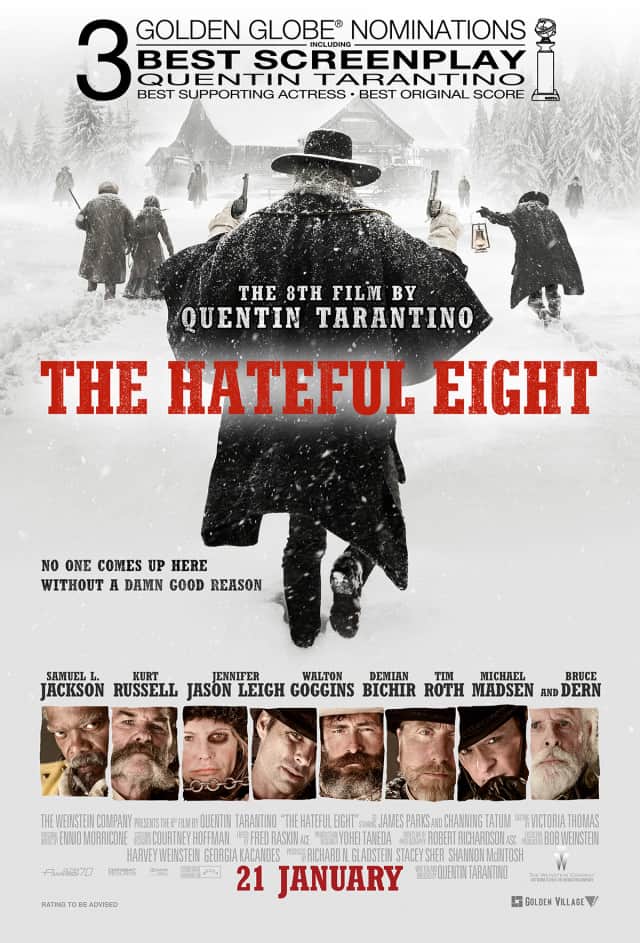 Hang on to them reins, boys and girls, because Quentin Tarantino’s wrangled up his eighth motion picture and is coming at you guns a-blazin’, all shot in glorious 65mm. It is some time after the Civil War in wintry Wyoming and bounty hunter Major Marquis Warren (Jackson) hitches a ride on a stagecoach occupied by fellow bounty hunter John “Hangman” Ruth (Russell) and his captive, Daisy Domergue (Leigh). Ruth is delivering Domergue to the town of Red Rock, and the trio comes across Chris Mannix (Goggins), apparently the new sheriff of Red Rock. The four arrive at Minnie’s Haberdashery, a stagecoach lodge, which is being looked after by Bob the Mexican (Bichir) in Minnie’s absence. They meet the other lodgers: English hangman Oswaldo Mobray (Roth), ranch hand Joe Gage (Madsen) and former Confederate general Sanford Smithers (Dern). Trapped in the middle of a fierce blizzard, this motley crew aren’t going to sit all quiet-like and wait for the storm to blow over, with mysteries unravelling, tensions mounting and lots of blood being spilled. 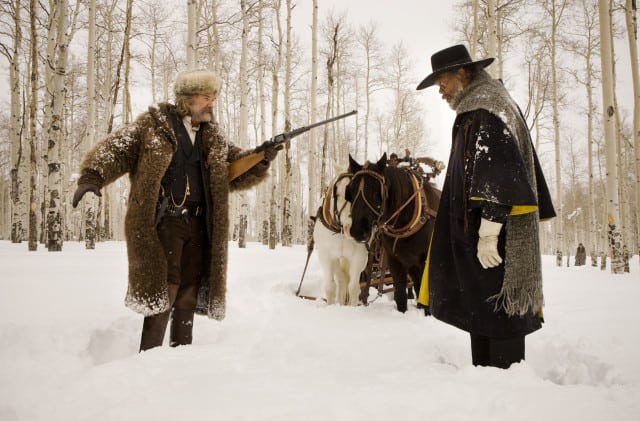 As can be expected with any new Tarantino project, there was a great deal of pomp and circumstance surrounding the development of The Hateful Eight. The script surfaced online in January 2014, inciting Tarantino’s rage and a degree of finger-pointing as to who exactly leaked the screenplay. Tarantino briefly considered scrapping the film entirely and publishing The Hateful Eight as a novel instead. A live reading was staged before the film eventually went into production. Legendary composer Ennio Morricone came on board to score his first Western in 34 years and provide the first original score for a Tarantino film, the soundtracks of which customarily comprise existing songs. Then, the film was released in an old-fashioned roadshow presentation projected in 70 mm format, this version containing an extra 20 minutes of footage compared to the regular theatrical release.

After all of this build-up, The Hateful Eight emerges as a film that is Tarantino’s through and through, but is not one of the director’s stronger efforts. With all the accolades he has amassed and with the impact his films have made on the pop cultural landscape, it makes sense that Tarantino would be given carte blanche to create the film he wants to. This is a spectacularly self-indulgent piece, and while Tarantino has made self-indulgence work in his favour in previous films, The Hateful Eight will test audiences who aren’t already converts to his style. Near the beginning of the film, Ruth orders Warren to put aside his pistol “molasses-like”, which is exactly the pacing of the movie. The 167-minute-long theatrical cut is already a challenge to endure, let alone the 187-minute roadshow cut. The cast is peppered with actors who have worked with Tarantino before and the director’s penchant for bombastic monologues and excessive, gory violence is in full force here. He has always planted his flag at the intersection of artfulness and vulgarity, and that flag is definitely still standing. 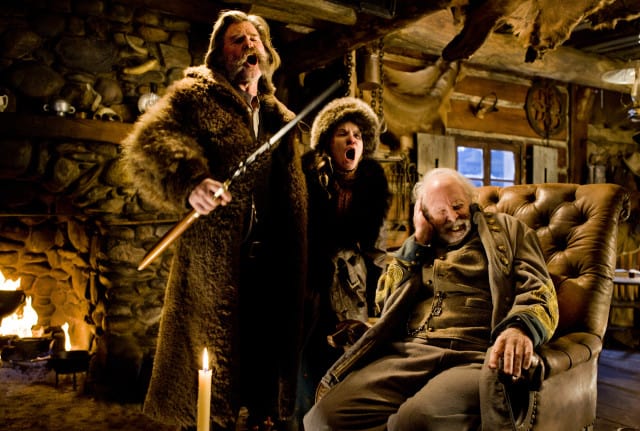 At its core, this is a mystery, with Tarantino citing the Agatha Christie classic And Then There Were None as a reference point. It seems like it would work better as a stage play, and Tarantino does indeed have intentions of writing and directing a Broadway adaptation of the film. There are twists, turns and reveals, but this is a more straight-forward story than it is presented as, with the feeling of a tense, intimate drama being bloated to epic proportions, stuffed with over-the-top posturing and drenched in mostly unnecessary blood. Our characters arrive at a locale, are stuck there and a whodunit unfolds. The sometimes ridiculous heights that this reaches detract from the overall impact and suspense.

There are ingeniously staged moments of ratcheting tension that are immediately undercut by fountains of arterial splatter. One can imagine Tarantino rubbing his hands with glee, setting special effects makeup artists Greg Nicotero and Howard Berger loose on set, armed with assorted viscera. When Tarantino was paying homage to genres like the gangster movie, Blaxploitation or the martial arts film in the past, bloody violence makes more sense than it does in association with westerns, even given revisionist works by the likes of Sam Peckinpah. The violence crosses past the point of being shocking into being pointlessly numbing. 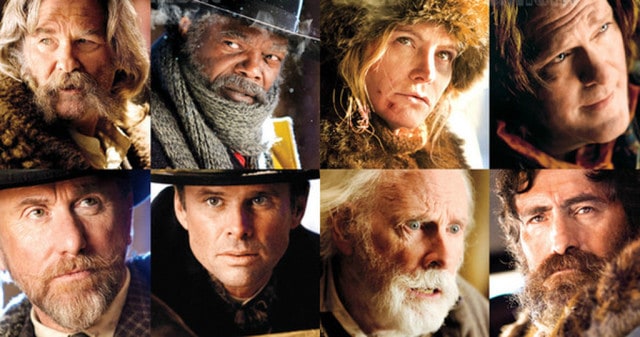 Watching the cast at play is fun and thankfully, there’s a great deal of that going on here. This is an ensemble piece, but Tarantino’s oft-collaborator Jackson takes the lead as Major Marquis Warren. We initially lean into rooting for Warren because, as the lone black character for the bulk of the film, Warren is the target of strong racial slurs, but his own volatility and detestable actions soon come to light, making him at once fascinating and repulsive. Russell’s more understated approach is the ideal counterpoint to Jackson’s style, and for the most part, it’s clear this is a cast who knows full well what they’re doing.

Leigh is remarkably believable as the scuzzy Domergue, bad teeth, black eye, stringy hair and all, perhaps the most authentic of the bunch in mannerisms and appearance. Jennifer Lawrence was reported under consideration to play Domergue. Dern has a quietly commanding presence and carries one of the film’s most powerful moments, a conversation between Warren and Smithers about the fate of Smithers’ son. Goggins is entertaining though often bothering on annoying as he enthusiastically bounces about the set. Madsen puts in the least effort, though perhaps there’s a charm in that stemming from the Reservoir Dogs connection. In addition to Mr. Blonde, Mr. Orange, a.k.a. Tim Roth, is also present. 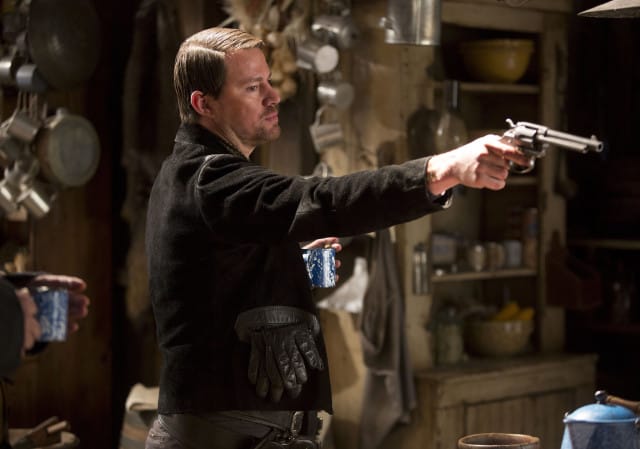 Tatum’s appearance, however brief, completely pulled this reviewer out of the film. The actor has stumbled awkwardly through many a dramatic role and the ruthless badass Tatum plays in The Hateful Eight doesn’t capitalise on any of his comedic strengths. Stunt performer and actress Zoë Bell, a Tarantino mainstay, also has a minor supporting role. Bell’s New Zealand accent is acknowledged, but that doesn’t make it any less out of place in the setting.

For fans of Tarantino’s technique and style and those who have enjoyed dissecting his back-catalogue and devising theories about how the events of all his films are connected, The Hateful Eight will be a largely fulfilling experience. However, if the wanton violence and odes to specific pop culture ephemera in his previous movies were alienating, The Hateful Eight is all the more so. It is generally true that a director making a film for himself is better than a hired gun just cashing a check, but The Hateful Eight feels like it was made primarily for Tarantino’s own amusement, and that if the general audience happens to like it, it’s mostly because they’ve been conditioned by the director’s own oeuvre. 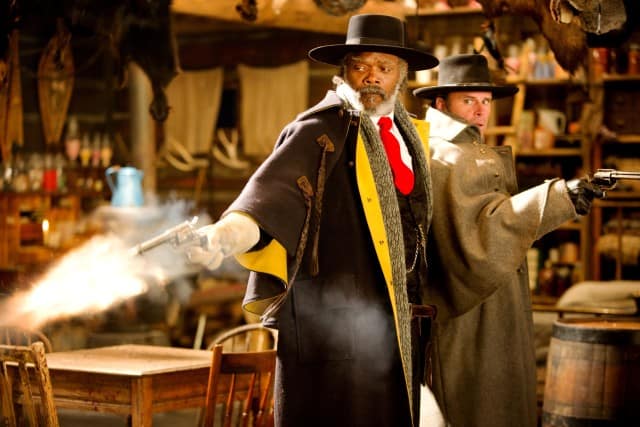 Summary: The Hateful Eight is packed with its director’s signature flair, but it often feels saturated and overwhelmingly self-indulgent, a cloud of “you’re supposed to like this because it’s Tarantino” hanging over it.