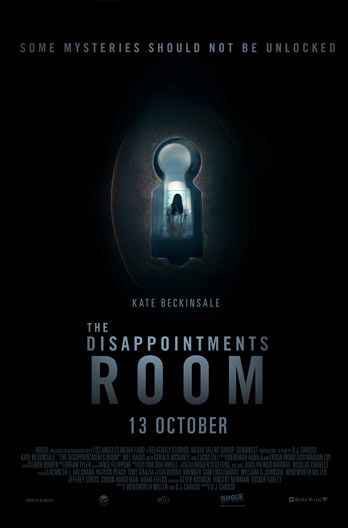 A film with the title ‘The Disappointments Room’ is more or less asking for it. There’s that joke out of the way. The name makes it sound like this is a comedy-drama about a class of underachieving students who are galvanised by an inspirational teacher. Instead, it’s a supernatural/psychological horror movie.

Architect Dana (Beckinsale), her husband David (Raido), and their young son Lucas (Joiner) are looking to start over in the wake of a family tragedy. They move from the city to a sprawling, dilapidated country home, which Dana is intent on refurbishing. Unexplainable happenings in the house spook Dana and she discovers a hidden chamber in the attic which was not in the blueprints. Dana learns that this is a ‘disappointments room’, in which wealthy families would lock away children who had birth defects and who would embarrass their parents. Dana sees visions of the cruel Judge Blacker (McRaney), the former owner of the house, and his deformed daughter Laura (Jones). Local handyman Ben (Till) arrives to help Dana with the repairs, but Dana finds herself losing her grip on her sanity as the estate’s dark past consumes her.

The Disappointments Room feels like the result of director D.J. Caruso picking up an instant ‘haunted house movie’ mix from the store and then missing a step or two during preparation. The film is co-written by Caruso and Wentworth Miller, marking the actor’s second produced screenplay following Stoker. While that Hitchcock-influenced Gothic family saga was unsettling and benefitted from Park Chan-Wook’s sumptuous direction, The Disappointments Room is a lot more rote. Creaky doors, a leaky ceiling, creepy paintings and a violent secret history are all present and accounted for. To be fair, it does look like an actual movie and doesn’t feel as cheap or schlocky as it well could have, but there’s just not a lot of personality to the house. The Adamsleigh Estate outside Greensboro, North Carolina, serves as the primary location. There’s nothing really that sets it apart from every other rickety, foreboding horror movie mansion.

It’s very loosely based on a true story: Rhode Island residents Laurie and Jeffrey Dumas did discover a secret room in their house. A young girl named Ruth, who was born in 1895 and died five years later, was barricaded in said room. The couple did not report any paranormal activity. Sadly, the practice of segregating individuals with special needs from society out of fear and ignorance still continues to this day, and The Disappointments Room could have been a thought-provoking examination of societal attitudes towards the disabled. Instead, we get ‘they’re scary because they’re deformed’.

Beckinsale doesn’t seem to be phoning it in, but the way in which Dana is characterised does leave a lot to be desired. Instead of being tragic and moving, the back-story in which Dana’s infant daughter dies, leaving her racked with guilt, comes off as convenient. The maternal hysteria that supposedly serves as the movie’s emotional core feels like reductive shorthand, a case of ‘blame it on the unstable woman’. Dana is depicted as capable and handy around the house but because this motivation feels so familiar, nothing compelling comes of it.

Raido is pretty bland as David. We see the effort that David puts into raising Lucas but the character ends up as little more than the slightly schlubby dad who’s trying to cope with his wife’s meltdowns. This being a horror movie, the kid is incorporated into some scares but we don’t get to understand the extent to which losing his baby sister and having his life completely uprooted has affected young Lucas. Till works his boyish charm for all it’s worth and the scenes in which Ben playfully flirts with Dana do provide a little levity, but the character would have worked better with some sinister undertones. As the main ghost, McRaney does a lot of standing around and staring ominously into the camera.

Film music is often guilty of spelling out what viewers should feel and this is most evident in the horror genre. Brian Tyler, whose work in the Marvel Cinematic Universe and Fast & Furious movies has raised his profile as a composer, turns in a score that borders on self-parody. Frenzied strings and loud ‘scare chords’ result in a complete lack of subtlety, and music that constantly lunges at the audience generates more annoyance than it does fear.

The Disappointments Room looks the way we expect a horror movie to look and sounds the way we expect one to sound. There aren’t really any surprises to be found and it feels like the disappointments room itself should be a clue to a larger mystery, instead of being what the entire plot hinges on. It’s more a case of nobody trying really hard than this being a laughable display of ineptitude. When directors like James Wan are out there proving it’s still possible to make genuinely frightening haunted house movies that work, there’s not much excuse for The Disappointments Room.

Summary: If you’re tired of the same old haunted house movie clichés, keep out of The Disappointments Room.