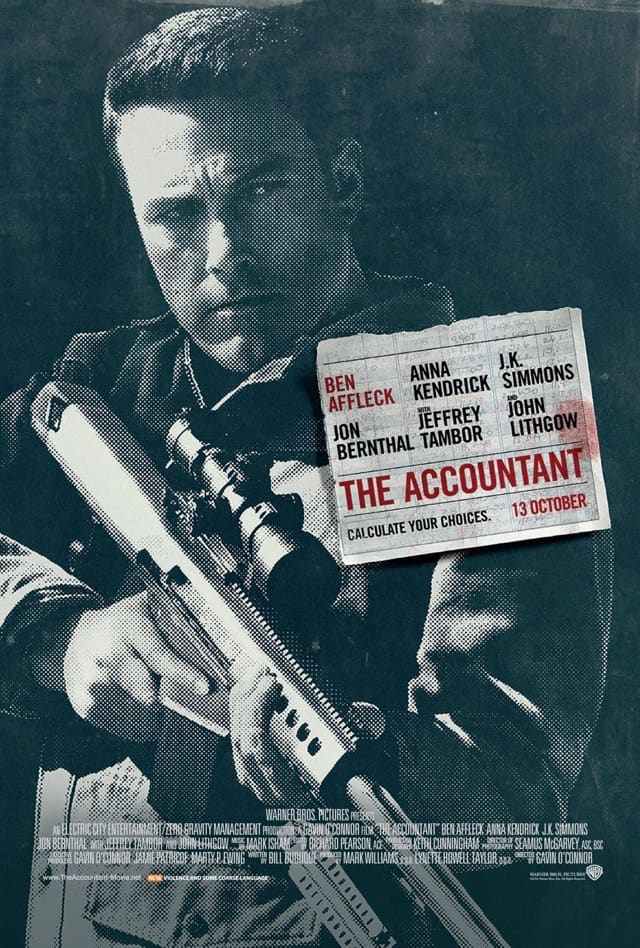 When accountants pop up in movies, they’re generally meek nebbishes: think Gene Wilder and, later, Matthew Broderick as Leo Bloom in The Producers. Not here. Ben Affleck plays Christian Wolff, a certified public accountant with high-functioning autism. The mathematical genius covertly uncooks the books for the world’s most powerful criminal masterminds and is also a highly-trained marksman and hand-to-hand combatant. Treasury Department investigator Ray King (Simmons) has made it a priority to hunt down the mysterious underworld figure known only as ‘The Accountant’, putting analyst Marybeth Medina (Addai-Robinson) on the case. Christian is hired by Lamar Black (Lithgow), the founder of high-tech prosthetics manufacturer Living Robotics. Dana Cummings (Kendrick), a junior accountant at Living Robotics, has uncovered an anomaly in the financial records that puts her life at risk. In the meantime, Christian is pursued by Brax (Bernthal), a rival assassin with a link to his distant past.

The Accountant is an odd duck, a mashup of the ‘misunderstood genius’ drama and action thriller sub-genres. Bill Dubuque’s screenplay was featured on 2011’s Black List of the most-liked unproduced scripts making the rounds in Hollywood. While there are combinations of story elements in The Accountant which one would be hard-pressed to find in any other movie, there are also beats that seem quite familiar. There are stretches of awkward exposition and the Medina character is introduced by way of having her superior reel off her résumé so the audience will know that she’s both brilliant and has a dark side. As expected, there is a lot of mathematics in the plot. Instead of a training or lock-and-load montage, this movie has an accounting montage. It might be helpful to view all the bookkeeping talk in the same vein as Star Trek techno-babble, but a good amount of effort is required from the viewer to follow the progression of the story.

Any time an able-bodied actor portrays a differently-abled character, there’s bound to be a little controversy. On the one hand, it’s a role that could have gone to an actor who actually has the condition being depicted but on the other, the studio needs a big name. Affleck’s performance won’t be mentioned in the same breath as Dustin Hoffman’s turn in Rain Man or Daniel Day-Lewis’ role in My Left Foot, but it gets the job done. Affleck is mostly robotic but also puts the effort into capturing the little tics Christian possesses. He is harder to buy as a maths whiz than his buddy and Good Will Hunting co-star/writer Matt Damon, since Affleck has always been perceived as the more lunkheaded of the pair. The intensity and focus with which Affleck performs the action sequences is riveting enough, though.

There is an impressive supporting cast here but strangely enough, they aren’t given all that much to do. Kendrick’s character is a loveable blend of ‘adorkable’ and intelligent – one almost suspects that ‘an Anna Kendrick type’ was scribbled in the margin of the casting notes. The dynamic that develops between Christian and Dana isn’t what one might expect of a typical action movie, which is surprising in its own right.

Bernthal plays a garrulous faux-friendly assassin who seems to have wandered in from a Tarantino flick, calmly and affably chatting to his would-be victims, explaining how he’ll kill them. Alas, the final showdown between Bernthal and Affleck isn’t nearly as exciting as the phrase ‘Batman vs. the Punisher’ might suggest.

Simmons has a lot of range as a performer, and while Ray King isn’t a caricatured ‘police chief’, he’s still pretty non-descript. The back-story given to Addai-Robinson’s character is more interesting than her actual performance but the procedural element in which Marybeth does the detective work to identify and track Christian down does have a satisfying logic to it. Lithgow and Jeffrey Tambor, both reliable veteran actors, get very little screen time.

There are little textural elements to The Accountant that give it a much-needed injection of fun. For example, Christian is paid in rare art and collectibles, including original Renoir and Pollock paintings, a Star Wars lightsaber prop with a plaque signed by George Lucas, and Action Comics #1, the valuable comic book in which Superman first appeared. Prepare to hear the comic collectors in the audience wince when Christian tosses the issue (sans acrylic slab) nonchalantly into a duffel bag.

The Accountant’s mystery is more convoluted than it is gripping, with a succession of reveals at its conclusion wrapping things up a little too neatly. It’s not your, well, by-the-numbers spy/hitman flick but, at the same time, its individual components feel like odd bedfellows, and these books end up somewhat imbalanced.

Summary: The things that make The Accountant unique also make it challenging to get wrapped up in. It’s a weird one but maybe that’s what you’re looking for if the standard action-thriller bores you.