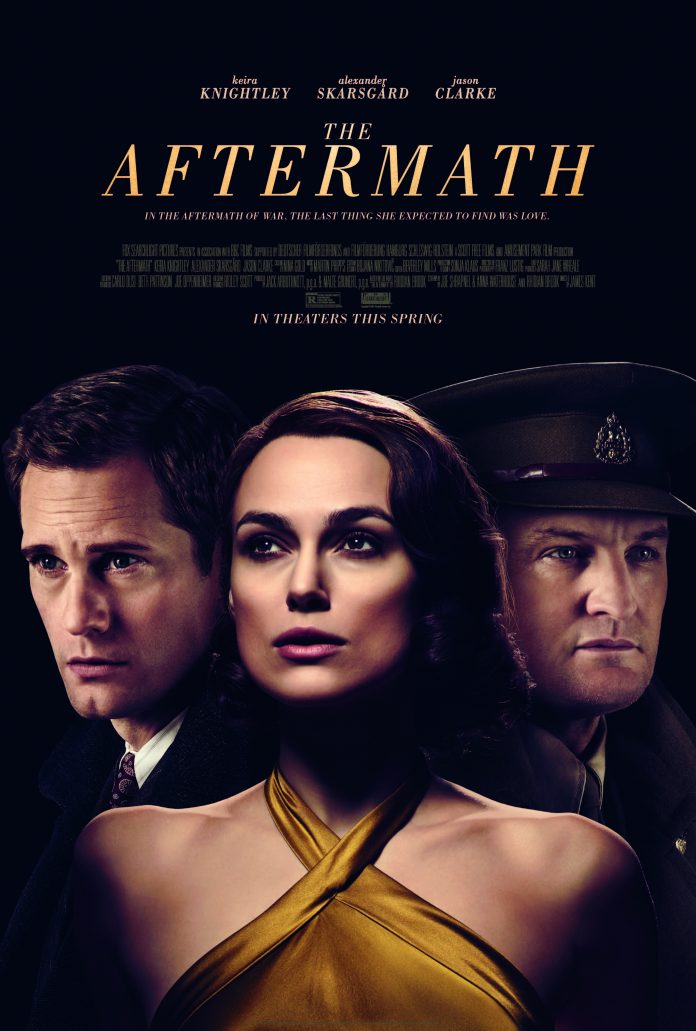 The Low-Down: Adapted from Rhidian Brook’s popular novel of the same title, The Aftermath is a postwar melodrama that is set in Hamburg, Germany, briefly after the British army’s victory. This war movie focuses on the the “de-Nazification” of the German civilians in an attempt to weed out Hitler extremists. But we all know that the aftermath of any war or conflict is harder to grapple with, let alone achieving a peaceful reconcillation.

The Story: British military captain Lewis Morgan (Jason Clark) and semi-estranged wife Rachael are requisitioned a huge mansion owned by German architect Stefan Lubert (Alexander Skarsgård) and his daughter, Freda (Flora Thiemann). Lewis allows the German family to stay in the attic, feeling that it’s only the right thing to do. However, as the British couple grows apart because of buried traumas and Lewis’s denial of their clearly fragmented relationship, a knotty love triangle simmers.

The Good: How The Aftermath balances between the British and German military and civilian population is perhaps the most commendable effort. This film is also a rare WWII pic that looks at the aftermath of both sides of the war, particularly the mentally-damaged victims and how they grapple with loss and grief. Technical-wise, it is almost every bit on point: from the digital recreations of the war ruins and brilliantly shot winter landscapes of Hamburg, to the tight camerawork.

The Not-So-Good: That said, how Rachael and Stefan grow from xenophobic house lady and ex-landlord to passionate starcrossed lovers is the biggest gap. It felt as though the soapy portions were cut out just to trim the runtime down to under 120 minutes. The result? Key emotional scenes fail to land because it’s hard to feel for these characters when we’re blocked out of the crucial turning points in their complicated relationship.

Knock-Out Performances: Plot and storytelling aside, Knightley and Skarsgård are phenomenal in every scene they share — their chemistry never seems forced or unauthentic. Clark is great but he’s undercut for the most part until later on, where he flexes his veteran acting muscles.

Watch Out For: The tense and gripping interrogation scene between Stefan and Lewis’s colleague, Burnham, as the latter tears the German apart with concentration camp pictures, loaded questions, and a berating tone.

Recommended? Not quite because the story is lacking. If you’re craving a melodrama starring a fine cast, this might satisfy you a little. Or if you just want to watch Knightley and Skarsgård navigate their confused relationship and sexually tense scenes, this will be it.