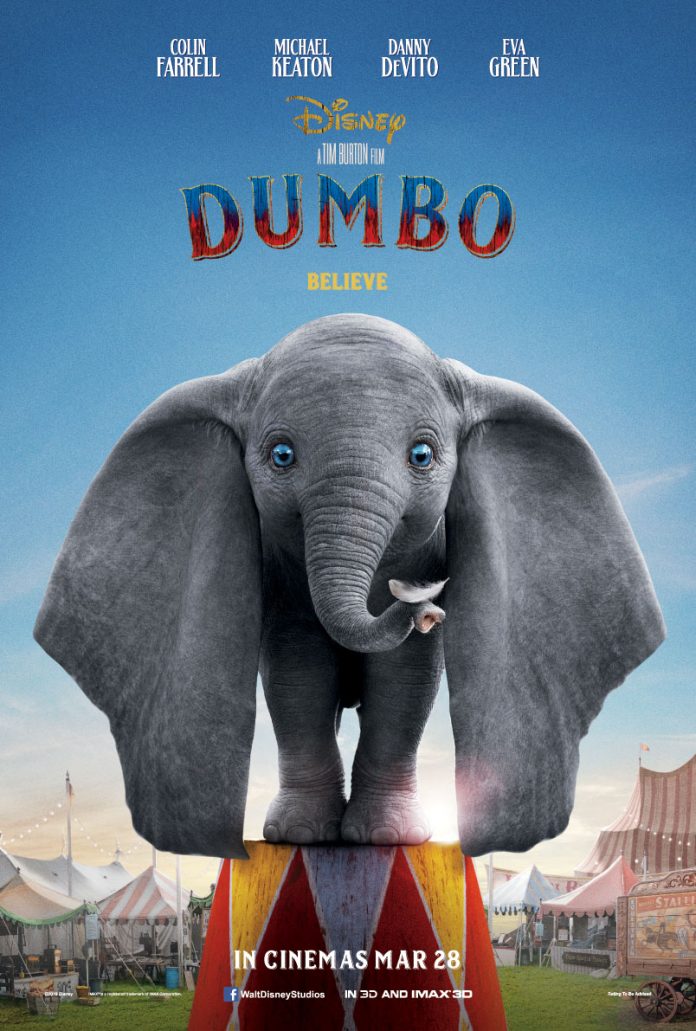 The Low-Down: Dumbo is Disney’s latest (but far from its last) attempt to adapt its vast stable of animated classics into live-action films. On paper, the project seems promising – there’s a hallucinogenic quality to the 1941 film that sits right in the wheelhouse of visionary director Tim Burton, who has concocted a career for himself out of wild, creepy, romantic movies about misfits and the people who love them anyway. The film also tries to do its own thing and doesn’t slavishly imitate the original film (which featured next to no human characters and was just 64 minutes long.) What a shame, then, that the final product feels a lot like the other remakes Disney has produced – passable, on the whole, with a few inspired moments and ideas, while never really coming close to surpassing the charm or magic of the original films.

The Story: Holt Farrier (Colin Farrell) returns from the war, short of an arm and a wife, to the travelling circus that is still home to his children, Milly (Nico Parker) and Joe (Finley Hobbins). He’s given the job of elephant whisperer just as a new pachyderm is born: Dumbo, a baby with ridiculously out-sized ears. Holt’s children bond with Dumbo, and quickly discover that his ears lend him the magical ability to fly. Soon, Dumbo’s growing fame as a circus act attracts the ravenous attention of theme-park entrepreneur V.A. Vandevere (Michael Keaton).

The Good: Dumbo is precious – with his enormous ears and soulful puppy-dog eyes, he’s easily one of the most adorable, appealing CGI creations ever put on screen. His story is also the most affecting narrative thread woven into the film, as he is forcibly separated from his mother and yearns to find his way back to her. Dumbo’s heartbreak is simple, true and heartfelt, recalling the bittersweet way in which his animated counterpart sorely missed his mother. The baby elephant’s tireless bravery in the face of cruel laughter and mockery will make you wish that this film named after him didn’t spend so much time with other characters instead.

The Not-So-Good: Dumbo, as a film, makes for a rather puzzling viewing experience. Beyond some gorgeous, gothic visual sequences (specifically Nightmare Island in Vandevere’s Dreamland theme park), there’s barely a hint of Burton’s trademark whimsy to be found. Except when Dumbo is in the mix, Ehren Kruger’s screenplay is lifeless and, on occasion, logic-free – possibly a holdover from his similarly bland work on three of the Transformers franchise’s worst and most bloated films. It’s especially frustrating because the bare bones of a good story are all there – especially the fact that Millie and Joe are motherless children, just like Dumbo. But it’s largely squandered on paper-thin characters and a literally fiery climax that doesn’t make either narrative or emotional sense.

Balancing Act The cast Burton has assembled is actually very good – but none of them is given quite enough to do. As a result, Farrell’s charm is wasted on a character who never stops to listen while he constantly yells about his late wife being the one who could “talk to the children”. Keaton’s Vandevere winds up as little more than a one-note capitalist cautionary tale. At least there’s a little snap and crackle to DeVito’s harried circus owner, and Eva Green manages to suggest both darkness and light as Colette, an otherwise underwritten French trapeze artist we first meet on Vandevere’s arm.

Freak Show You’d imagine that Burton would take the purest delight in populating this travelling circus with freaks and oddities akin to the ones that have peopled his filmography over the years. But most of the characters in this travelling circus barely even register. If you’re a fan of cult British shows though, watch out for Sharon Rooney as Miss Atlantis: she was dazzling in My Mad Fat Diary, and will steal a laugh and wring a tear or two out of you here, especially when she sings Baby Mine – one of the loveliest songs in the entire Disney canon.

Recommended? Hard to say. It’s undemanding family-friendly fare, for the most part, and you’ll be rewarded with the cutest baby elephant ever put on screen. But the movie can be a bit of a slog to get through the rest of the time.

Fantastic Beasts and Where to Find Them (2016) – Review