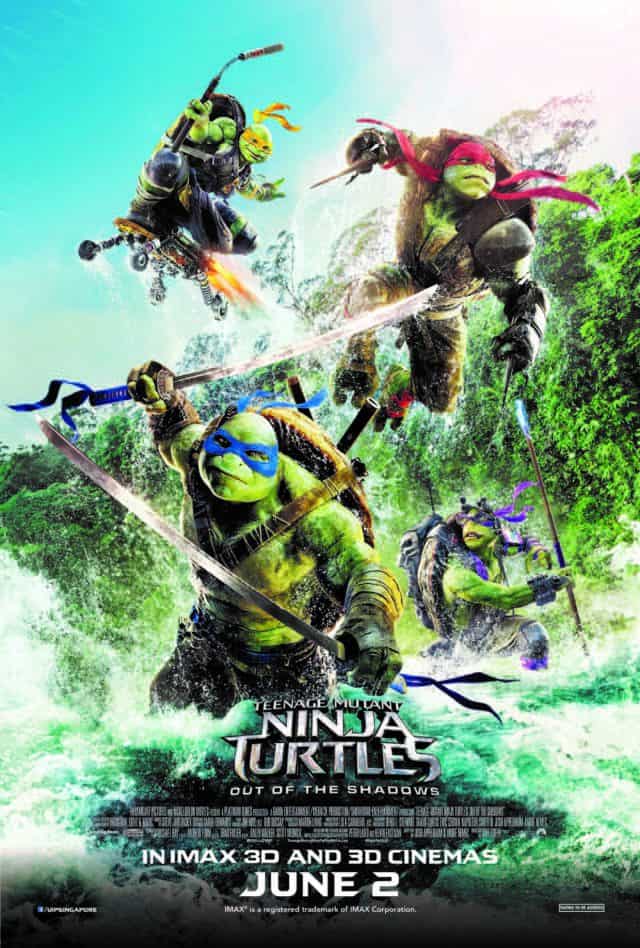 The world’s most fearsome fighting team have returned to fend off threats old and new – and now, they’re at least a little frustrated that they can’t take credit for it. The brothers Leonardo (Ploszek), Raphael (Ritchson), Michelangelo (Fisher) and Donatello (Howard) have remained in the shadows after defeating Shredder (Tee) a year ago, knowing they will be branded as monsters and reviled. Instead, former cameraman Vern Fenwick (Arnett) is getting all the glory as a New York hero. April O’Neil (Fox) discovers that scientist Baxter Stockman (Perry) is in cahoots with Shredder. After helping Shredder escape from custody, Stockman helps him create mutants of his own: warthog Bebop (Williams) and rhinoceros Rocksteady (Sheamus). Adding to the imminent danger is the alien Krang (Garrett), who plans to open a portal above New York to invade our world. It’s a good thing then that April and the Turtles have a new ally in the form of Casey Jones (Amell), corrections officer by day, hockey-stick-wielding vigilante by night.

2014’s Teenage Mutant Ninja Turtles was not exactly well-received by critics or fans, but a follow-up was inevitable. This time, Dave Green (Earth to Echo) has replaced Jonathan Liebesman in the director’s chair, though the lack of a discernible difference is a sign that the producers, led by Michael Bay, have a particularly strong hand in the proceedings. The tone and style remains pretty much the same from the 2014 movie, with the incorporation of fan-favourite characters and elements of Turtles lore in the hope of winning back the shellheads who were spurned by the previous outing. It’s hard to criticise something like this for being ‘silly’, since it can be argued that the silliness is intentional. However, Out of the Shadows frequently crosses the line from ‘silly’ to ‘stupid’. As we said in our review of the previous movie, Guardians of the Galaxy demonstrated how to do an exuberantly tongue-in-cheek sci-fi action flick loaded with pop culture references while not being embarrassingly juvenile. Guardians of the Galaxy, this most certainly is not.

The Turtles’ designs haven’t grown on us, we’ve just gotten a little less bothered by it over time. The computer-generated characters are integrated into the live-action environments nicely enough and the visual effects work, while sometimes conspicuous, is generally good. The interpretations of Bebop, Rocksteady and Krang do look acceptable. The action sequences will entertain younger viewers and the involvement of second unit director/stunt coordinator Spiro Razatos (the Fast and Furious movies, Captain America: The Winter Soldier) is a plus. However, nothing strikes us as particularly memorable and the climax with aliens invading New York is quite the yawn, at once too similar to the conclusion of the 2014 movie and to the ending of The Avengers – not to mention any other movie in which extra-terrestrial invaders have seized the Big Apple.

Perhaps the most positive thing about this film, as with its immediate predecessor, is that our heroes have fun saving the day. Sure, Raph is prone to brooding, but on the whole, they enjoy saving the day and at least a little bit of that is infectious. Characterisation remains paper-thin – the conflict that brews between the brothers is predictable, as is its eventual resolution. While they are sufficiently distinct from each other, not much of an attempt is made to flesh these characters out. It sounds absurd to ask for depth from TMNT, but several of the cartoons, including the current show on Nickelodeon, have succeeded in giving the characters personalities past the single-line descriptions from the theme song. 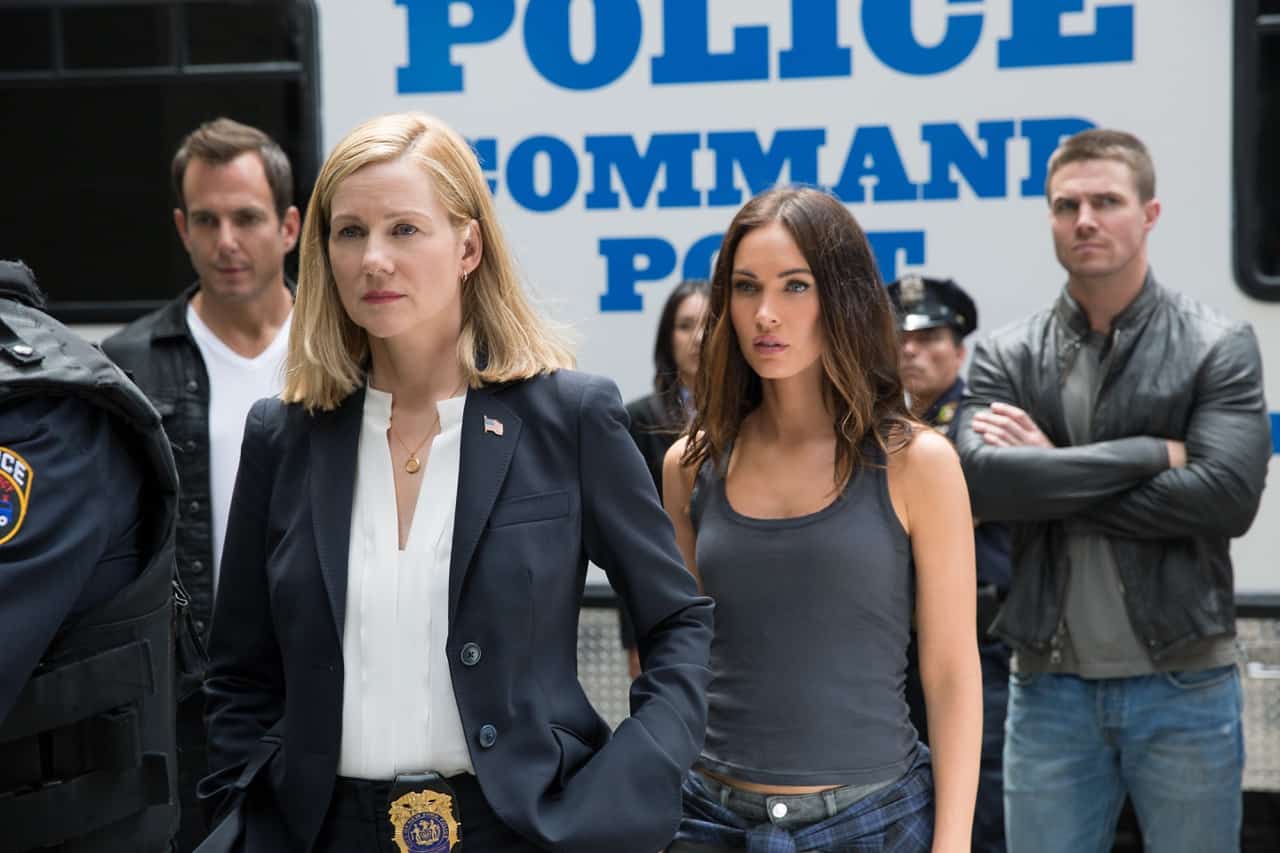 Fox remains a poor choice for the role of April O’Neil, and while it is a silly thing to whine about, the character doesn’t even have her signature red hair. There’s a lot of unnecessary leering at Fox and the abbreviated schoolgirl get-up she dons early in the film is a cringe-worthy moment of fan-service. Even the most ardent fans of Arrow would be hard-pressed to deny that Amell isn’t a particularly skilled actor, and his turn as Casey Jones is pretty stiff when the character should be effortlessly cool. He does handle the action beats well, having years of playing a comic book hero under his belt. Perry hams it up as Baxter Stockman, playing him as little more than the, well, stock dweeby scientist. Perry ignores anything interesting about the character, instead becoming yet another comic relief sidekick. It’s also not like he needs the money. Finally, it is truly disheartening to see three-time Oscar nominee Laura Linney absolutely slumming it here. 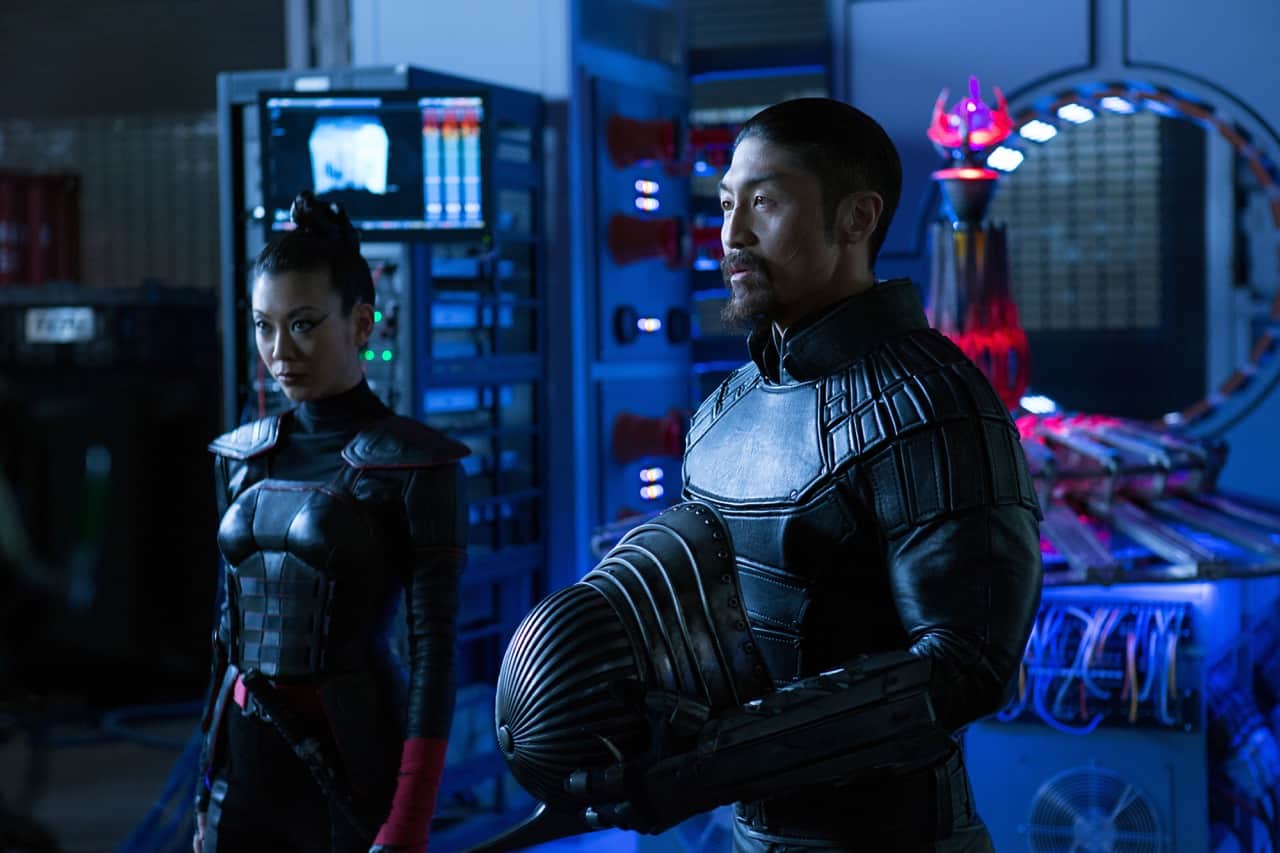 Several of the casting changes are nominal improvements – Brian Tee steps in for Tohoru Masamune as Shredder while Brittany Ishibashi replaces Minae Noji as his chief henchwoman Karai. William Fichtner was set to reprise his role as Eric Sacks, though it appears his scenes have been left on the cutting room floor. If you’re able to either overlook or revel in the childishness that runs through most of the movie, it is occasionally entertaining. However, if your tolerance for clunky dialogue, embarrassing jokes and generic action is particularly low, Out of the Shadows will try your patience to no end.

Summary: About on par with the 2014 film, Out of the Shadows is immensely silly and difficult to get into, but its titular heroes are intermittently endearing and the introduction of key players from the comics and cartoons is a half-step in the right direction.