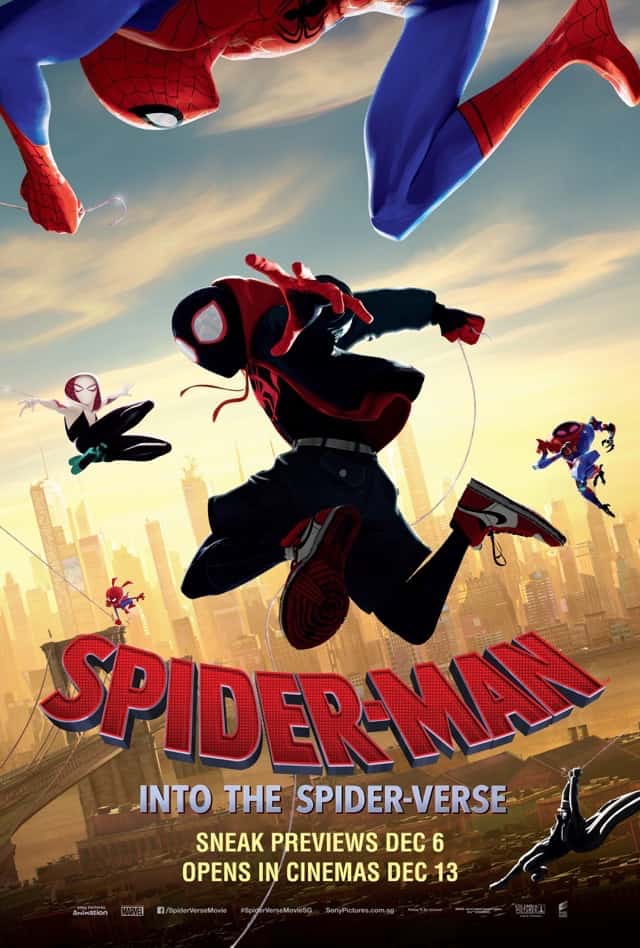 The Low-Down: Does the world really need another Spider-Man movie? In just over 15 years, we’ve already had three different Peter Parkers, each one with the same basic origin story. It’s a reliable formula that’s been run into the ground… hasn’t it? And yet, Spider-Man: Into The Spider Verse will have you clamouring for more. This fresh, funny, fantastic film proves that there’s entire universes of mileage left in all things Spider-Man – introducing us to brand-new hero Miles Morales, while also dissecting (and reinforcing) our love for good ol’ Peter Parker.

The Story: Miles Morales (voiced by Shameik Moore) is a high-school kid just trying to figure out his purpose in life – which sharpens somewhat terrifyingly into focus when he’s bitten by a radioactive spider and finds himself literally climbing the walls. Suddenly, he’s forced to assume the mantle of Spider-Man, battling to save the world from the heartbroken insanity of Wilson Fisk (Liev Schreiber). It’s a tall order for a half African-American, half Puerto-Rican kid from Brooklyn but, fortunately, Miles soon discovers that he isn’t alone in the universe…

The Good: Where to even begin? Into The Spider Verse is a delight in practically every way. First and foremost, it’s remarkably refreshing to see a character like Miles – a young man of mixed-race descent – get his own superhero origin story. It helps enormously that the screenplay, credited to Phil Lord and Rodney Rothman, is equal parts sweet, sharp and snarky. Some superhero movies (*cough*DC*cough*) can take themselves too seriously, but Into The Spider Verse skewers Spider-Man’s cinematic history with a cheeky charm that’s impossible to resist. Miles also leads a cast of enormously appealing characters, including clever twists on fan favourites like Peter Parker (Jake Johnson), Aunt May (Lily Tomlin), Gwen Stacy (Hailee Steinfeld) and Doctor Octopus (REDACTED).

The Not-So-Good: There’s almost too much going on, all the time. Into The Spider Verse is stuffed to the brim with multiple characters, multiple universes and multiple plot-lines – so much so that the emotional weight of Miles’ fraught relationships with his dad (Brian Tyree Henry) and uncle (Mahershala Ali), which should tear audiences apart, comes close to getting lost amongst the shift and shuffle of the plot. It’s hardly a deal-breaker, though: the narrative beats are all there, ready to be savoured and rediscovered on a rewatch.

The Gloriously Geeky: Comic-book fans, rejoice – this one’s for you. There’s a soul-deep love for Spider-Man lore threaded through every gorgeous frame of this movie. Naturally, it’s right there in the plot, as alternate universes collide and truly cult characters tumble into Miles’ life. But it’s the medium of animation that makes the real difference here. It’s why Into The Spider Verse can embrace its comic-book roots in a way that live-action movies can’t. In some of the film’s most visually arresting sequences, Miles leaps and soars in and out of frame, trailing sound effects and narration in his wake. This living, breathing comic-book effect is the crowning achievement of Sony’s animation arm – not only is it fluid and stunning, it’s ridiculously inventive, mixing and matching animation styles to further plot and develop character.

Watch Out For: Easter eggs galore! Spider-Man and Marvel aficonados should keep their eyes peeled for references peppered throughout the film. The late Stan Lee’s cameo will break and warm your heart in equal measure. Meanwhile, Brian Michael Bendis and Sara Pichelli, who co-created Miles Morales, are name-checked, as are concepts and terms well-known to fans of the comics (Earth-616 and all). Stay through the credits for a series of of wonderful, silly rewards, including a song off Spider-Man’s novelty Christmas album and some intriguing scenes that hint at where this new animated franchise might go. (A sequel and spin-offs have already been greenlit! 🙌) ALSO, this film features possibly the best use of Nicolas Cage in a movie since National Treasure!*

*Okay, fine, having Cage voice Superman in this year’s Teen Titans Go! To The Movie‘s was genius too – a nod to his life-long goal to play Superman. Maybe Cage should stick to voiceover work… 🤔