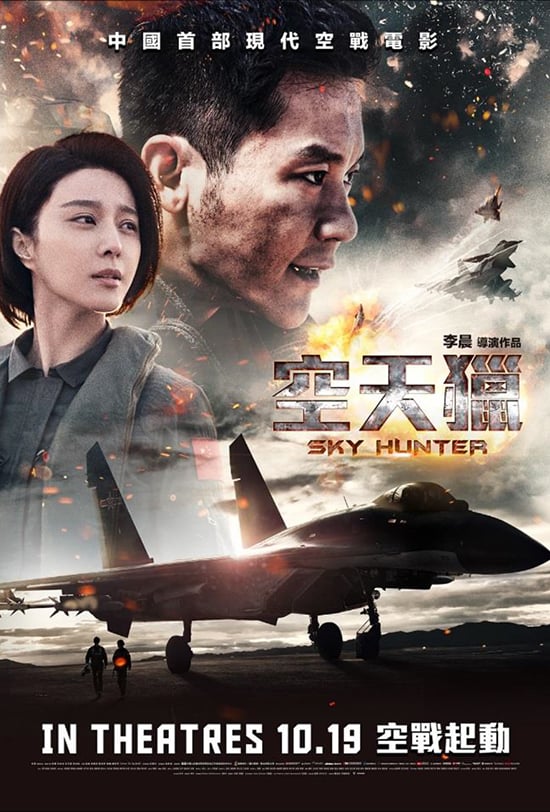 Marketed as China’s first aerial film and starring world-famous Chinese actress Fan Bing Bing and her fiancé, Li Chen, who doubles up as the director, Sky Hunter centres on a top-secret air force and its mission to thwart a terrorist attack in a fictitious country.

Sky Hunter seems like a tribute film to position the Chinese military as a force to be reckoned with, and an acknowledgement of the soldiers’ acts of heroism for their country. As a result, certain key characters get some form of development and the rest, near to none. The screenwriter is Zhang Li, a high-ranking officer in the Chinese air force but his writing doesn’t sell the characters well enough, which is the biggest shame.

There are no performances worthy of any mention except for a few intense scenes by Li Jia Hang, who plays as Li’s wingman. Bing Bing fans would argue that she’s perfect as Ya Li in Sky Hunter but she’s in a supporting role with barely any crucial scenes. Viewers with a keen eye for detail may spot apparent sloppiness, particularly in the mock practice scenes. And, the exaggerated acting by the terrorists makes them mere caricatures.

Fortunately, the soundtracks added a much needed oomph, especially during the intense scenes. You would expect nothing less since world famous German film score composer Hans Zimmer had a hand in it. Other merits include convincing visual effects and technical excellence in the overall directing and cinematography. The action scenes during the last infiltration mission are beautifully sequenced and edited to keep the audience at the edge of their seats.

In a nutshell, the film is effective in achieving its intended purpose and leaving a larger footprint in the visual effects space for Chinese cinema. Above all, it is a film meant to specifically appeal to the Chinese but could have taken a step further to get a better script. Nevertheless, if you are into army-themed action movies with decent special effects and can graciously forgive the clichéd hero’s journey plot, perhaps Sky Hunter is worth a watch.

Summary: Sky Hunter shows promising special effects and technical excellence, but the overemphasis on Chinese patriotism can be off-putting and overshadows the characters, whom should be the key focus even for a military film.