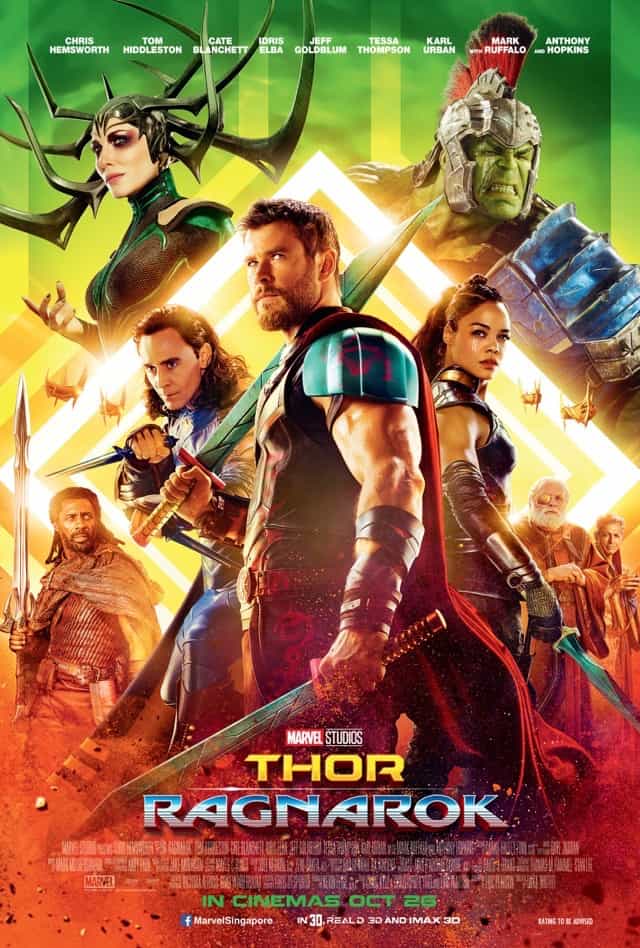 In some alternate reality, a movie bearing the title of Thor: Ragnarok has taken itself very seriously indeed: full of literal doom and gloom, it’s an apocalyptic drama about the End of Days, as prophesied by Norse mythology. Since that pretty much describes the world in which we currently live, it’s actually rather fitting that Marvel’s 17th studio film is something else entirely. In our reality, Thor: Ragnarok is a wild, wacky and very welcome blast of pure joy – a raucous comedy that fuses an intergalactic road trip with buddy comedy, brotherly rivalry and battle domes. Thank Thor (and director Taika Waititi) for that!

We reunite with Thor (Hemsworth) – still free of new Infinity Stones, freshly confident that he’s once again warded off the fabled Ragnarok – just as he discovers that something is rotten in the state of Asgard. As teased at the end of Thor: The Dark World, Loki (Hiddleston), his shape-shifting trickster brother, has been impersonating their ailing dad, Odin (Hopkins). When Odin’s strength finally fails, the dark secret he’s been keeping at bay storms into the lives of his sons: Hela (Blanchett), their bloodthirsty older sister, is back to claim the throne she believes is rightfully hers.

For (largely) better or (occasionally) worse, Thor: Ragnarok doesn’t dwell as much on the royal family drama as its predecessors did. Instead, its second act plays out on the candy-coated, death-dealing planet of Sakaar. Ruled by the whims and fancies of the Grandmaster (Goldblum dialled to 11), Sakaar’s people are relentlessly entertained in their very own battle dome. (Think the gladiatorial contests of ancient Rome, with holographic screens and super-powered alien beings.) Following an initial devastating confrontation with Hela, Thor is stranded on Sakaar, and brought in by the mercenary Valkyrie (Thompson) to stand against the raging primal force of the Hulk (Ruffalo) – not quite the “friend from work” Thor remembers.

If that all sounds like serious business, rest assured it’s very much not. There’s a gentle wit threaded through every frame of this film – a glorious, big-hearted silliness that fans of Taika Waititi will remember (and treasure) from such indie comedy gems as What We Did In The Shadows and Hunt For The Wilderpeople. Miraculously, Waititi has managed to infuse this gargantuan, green-screened epic with his trademark offbeat vibe, best exemplified in the way key plot points are revealed (via sardonic monologue or ironic stage play) and the character he plays (Korg, a chirpy rock monster who befriends Thor before our hero heads into the arena).

Waititi’s involvement is a blessing for pretty much everyone involved in the film, but especially for Hemsworth. It’s not that he hasn’t been good in his previous appearances as the God of Thunder throughout the franchise – he was suavely charming in Thor and resolutely grim in The Dark World. But he’s so remarkably good here, switching effortlessly between bright-eyed puppy and care-worn leader, that it feels like he’s finally come home. Hemsworth’s performance in this film is a fantastic balance of sunshine, silliness and subversiveness, and it’s a joy to behold.

It’s clear, too, that everyone in the cast – including respected veterans like Hopkins and Blanchett – were delighted to partake in the film’s mirth and mayhem. Ruffalo continues to play the dual aspects of Bruce Banner – looming brute and mild-mannered professor – with so much winning charm that you want him to get his own Hulk movie, stat. Hiddleston is totally game for playing up the odd-couple comedy of Loki’s rivalry with Thor, while shading unexpected complexity into his character’s machinations. Thompson swaggers off with practically every scene she’s in, finding the heart, humour and heroism in an Asgardian warrior who’s lost her way.

Perhaps more impressively, Waititi handles every Marvel blockbuster’s requisite action scenes with more clarity and flair than you’d expect from an indie director. He manages to find character and comedy beats even in swooping spaceship chases and bruising hand-to-hand combat. There’s a thrilling fluidity to the action sequences – whether it’s Thor soaring towards his enemies like lightning made flesh, or Hela unleashing her multiple projectiles of death with a dark, graceful beauty.

That’s not to say Thor: Ragnarok is perfect. As it turns out, the film’s greatest strength – apocalypse as afterthought – is also its biggest flaw. Waititi just about manages to find the emotional weight in Thor coming to terms with his power and leadership (a driving theme for this character), but it does get a little lost in all the knockabout comedy. Thanks to Blanchett, Hela is never less than terrifying: she oozes gleeful malevolence in her wake, forcing Thor to confront his own gold-tinted ideas of himself, his family and his history. Alas, she’s also one of that peculiar breed of antagonist who’s immeasurably powerful and strangely ineffective, all at the same time.

For years, Marvel has been making brave choices in terms of the directors to whom it has entrusted its stories and characters. This strategy has yielded films that are, for the most part, creatively diverse, ranging in quality from decent to excellent. Even so, handing the reins of the Thor franchise to a director with such a unique voice as Waititi might have been its biggest gamble yet. Fortunately, it pays off in spades. Smart, silly and self-aware, Thor: Ragnarok is a blockbuster that feels like it snuck into cinemas by way of the arthouse. It’s also that rare threequel which isn’t just as good as its predecessors – it’s easily the best of the lot.

Summary: Get ready to Ragnarok & Roll – this film is the most fun you’ll have in a cinema all year!