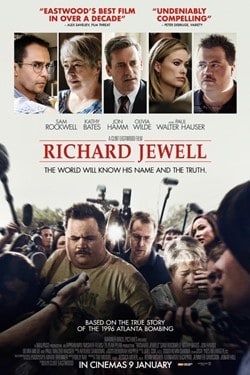 The Low-Down: From director Clint Eastwood and writer Billy Ray comes a biopic about Richard Jewell, the man who called in a bomb threat and was vilified as a suspect. The film is based on the 1997 Vanity Fair article American Nightmare: The Ballad of Richard Jewell by Marie Brenner, and the 2019 book The Suspect: An Olympic Bombing, the FBI, the Media, and Richard Jewell, the Man Caught in the Middle by Kent Alexander and Kevin Salwen. 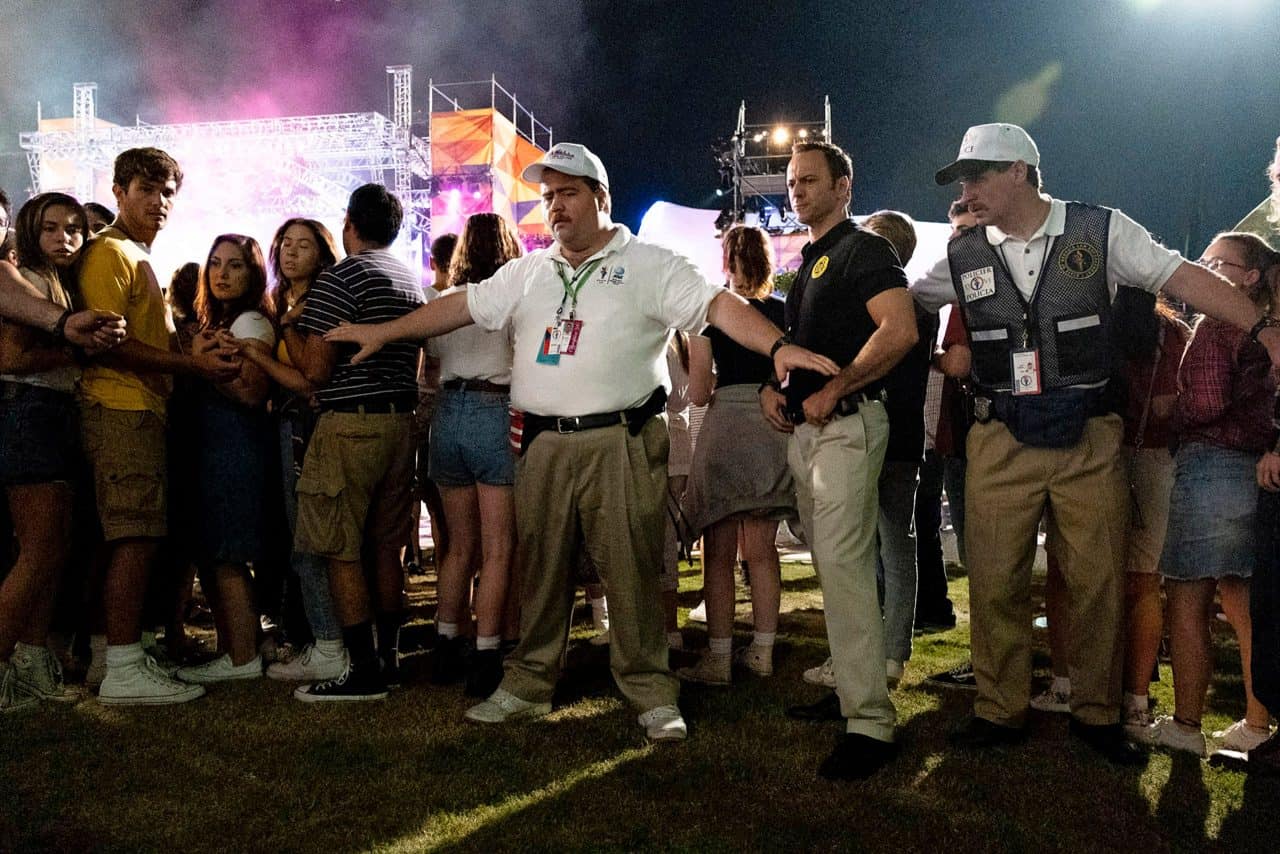 The Story: It is July 1996 and the 26th Summer Olympics are taking place in Atlanta, Georgia. Richard Jewell (Paul Walter Hauser), a security guard working at Centennial Park, notices a suspicious knapsack that is found to contain three pipe bombs. He is initially hailed as a hero but is soon regarded as a suspect in the bombing by the FBI, with agent Tom Shaw (Jon Hamm) strongly believing Richard to be the culprit. Tipped off by Shaw, Atlanta Journal Constitution reporter Kathy Scruggs (Olivia Wilde) breaks the story about Richard’s status as a suspect. The overwhelming media attention overwhelms Richard and his mother Bobbi (Kathy Bates). Richard turns to Watson Bryant (Sam Rockwell), a lawyer who worked at a public law firm where Richard was a supply clerk ten years ago, for help. Watson must help Richard clear his name and turn the tide of public opinion. 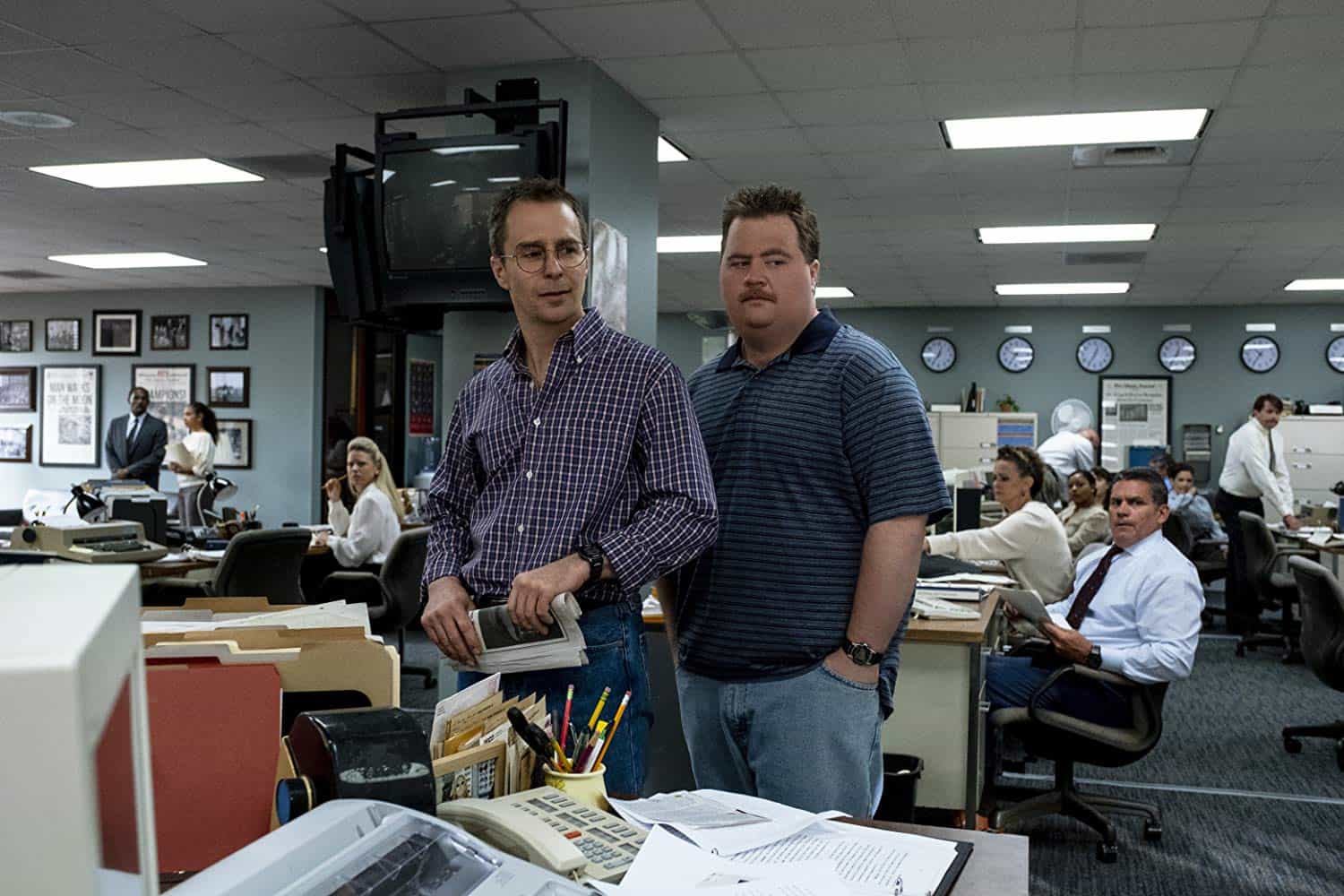 The Good: Eastwood has been directing movies for over 30 years and is a skilled technical director. Richard Jewell captures the 1996 Atlanta setting with enough authenticity – the film was shot on location at the actual Centennial Park. The scene in which Richard discovers the bomb is tense and gripping. Later, a scene in which Watson times a walk between the site where the bomb was placed and the public payphones where the bomber called 911 is stylishly cut with footage of sprinter David Johnson at the Olympics. Eastwood tells the story efficiently and it is abundantly easy to sympathise with Richard, even as the viewer grows frustrated at him for being easily manipulated and a bit too naïve. 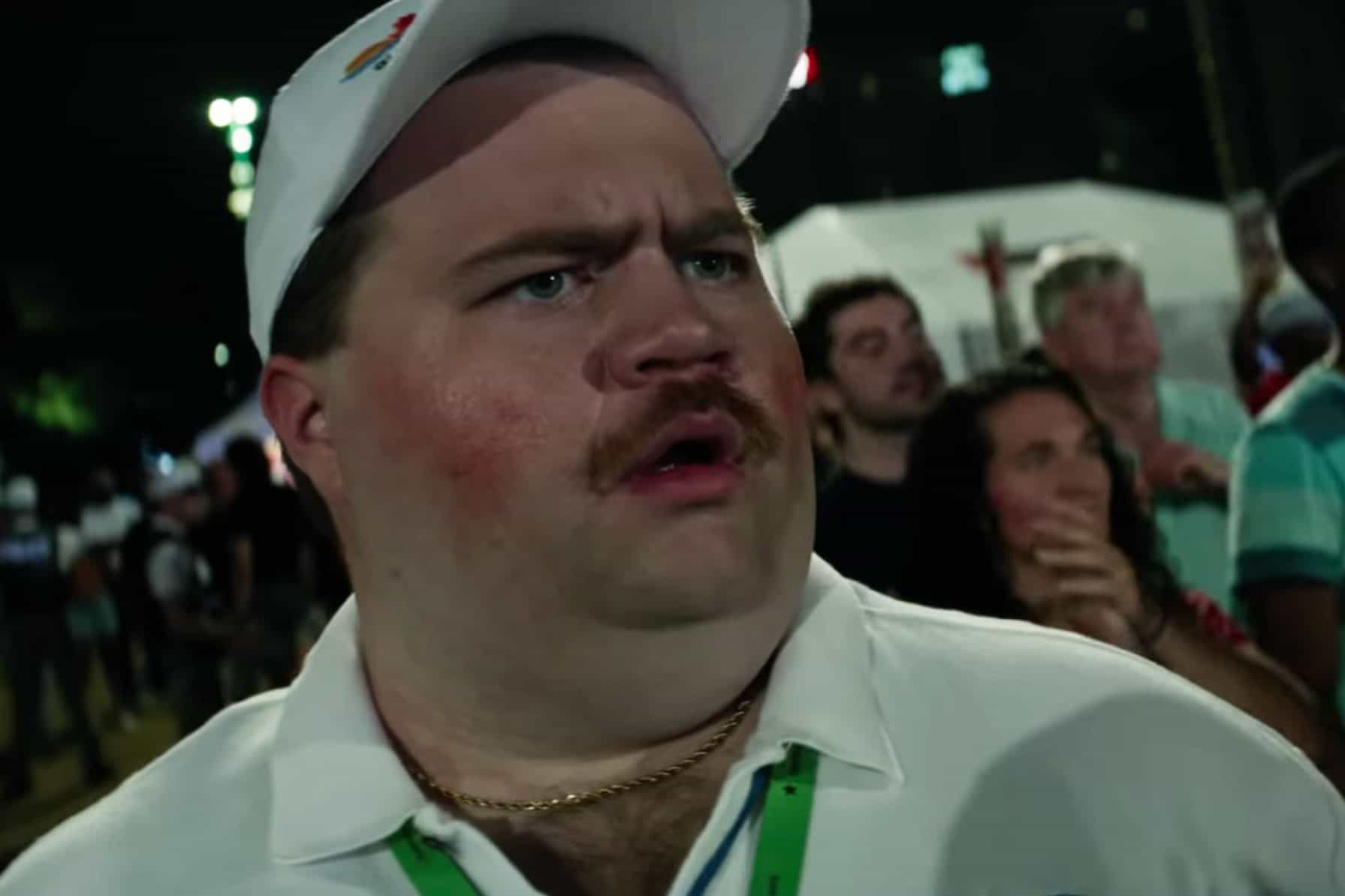 Eastwood is not just a good technical director, but a good actors’ director as well. He draws excellent performances from his cast here. Paul Walter Hauser is a loveable, hapless figure as Richard Jewell – he is not especially bright, but the film attempts to give him some dimensions. 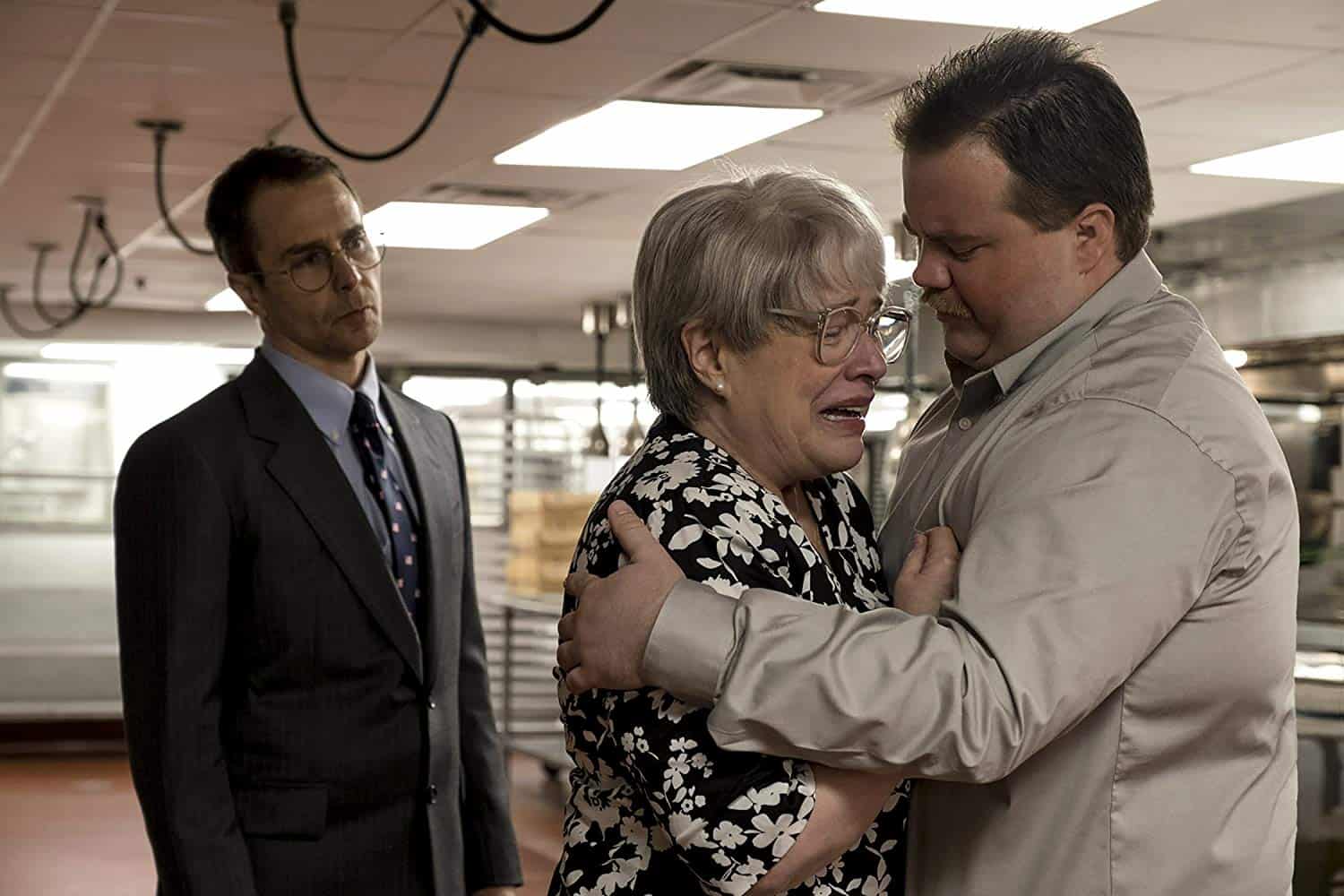 Kathy Bates is a warm presence as Richard’s mother Bobbi, who simply wants the best for her son and cannot bear to see him falsely accused and placed under such immense pressure. Rockwell is a go-to actor for slimy roles, so it is always nice to see him in largely noble parts. Watson is an honest salt-of-the-earth type but is also fiery and impassioned. Some of the film’s best scenes are between Hauser and Rockwell. 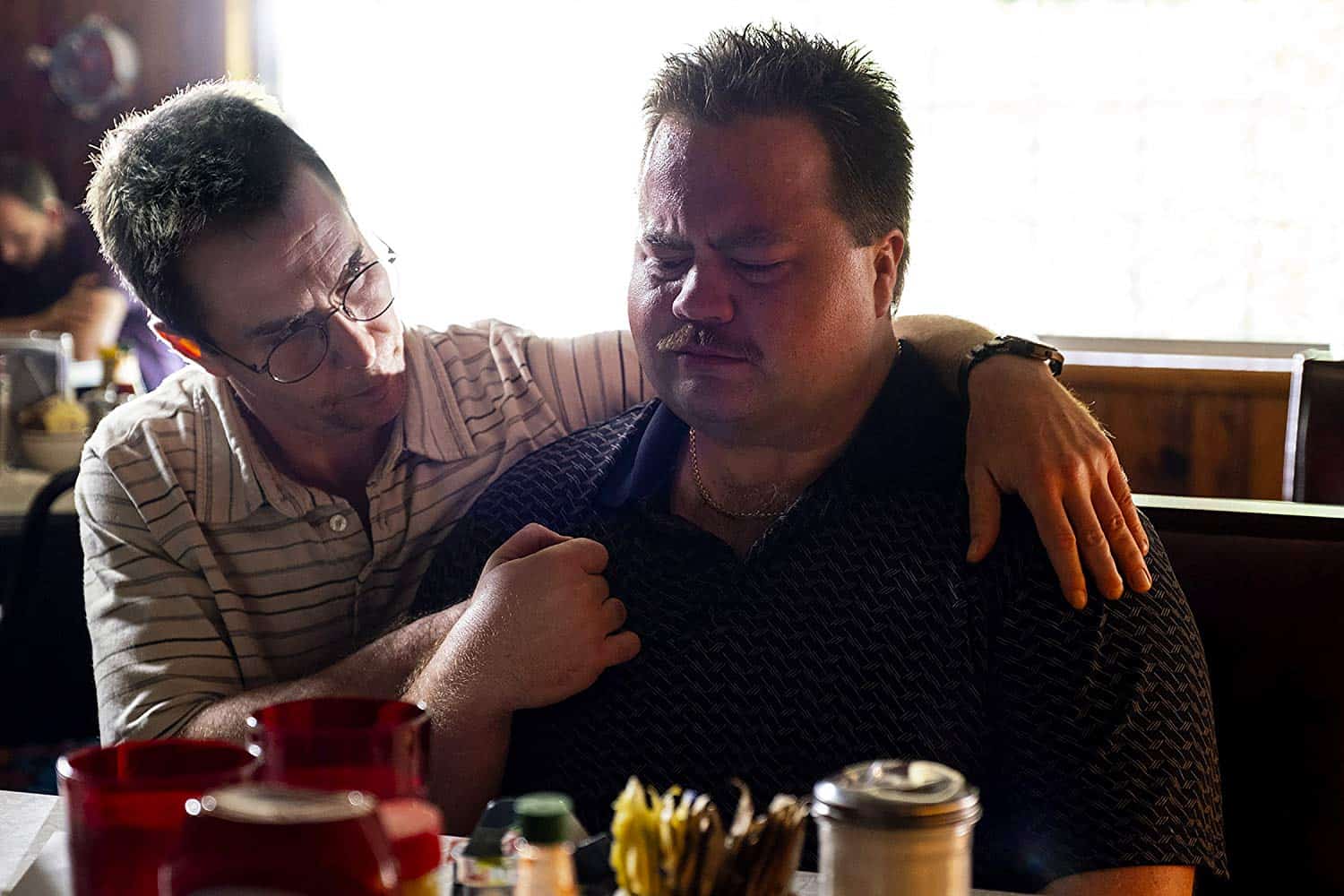 The Not-So-Good: Any film based on a true story will have inaccuracies, and one or two of the real people portrayed in said film – or those who knew them – are bound to come out and speak against the way they were characterised in the movie. With Richard Jewell, the inaccuracies seem more calculated. It’s harder to view them as honest mistakes and easier to believe that Eastwood had an agenda going on. It is common for biopics to make a larger point and provide commentary beyond the specific subject matter, but it feels like Richard Jewell leans too far in that direction, reducing the story to a vehicle for Eastwood’s political views. 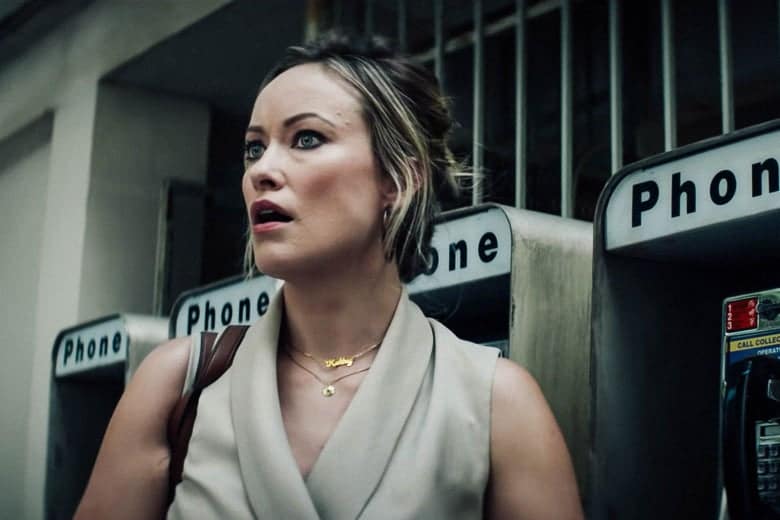 The film does a huge disservice to journalist Kathy Scruggs, who passed away in 2001 from a prescription drug overdose after dealing with depression and is not around to defend herself. The Atlanta Journal-Constitution ran an open letter by its editor-in-chief responding to how Scruggs and by extension the paper was portrayed in Richard Jewell. In the film, Scruggs is shown sleeping with a source for a scoop. The source, Jon Hamm’s FBI Agent Shaw, is a fictionalised composite character, but Scruggs was very much a real person. This propagates the insidious trope that women journalists trade sexual favours for tips. Authors Alexander and Salwen, whose non-fiction book was the basis of the movie, have firmly maintained that Scruggs did not sleep with an FBI agent to obtain information for her story.

The truth will out: In real life, Richard Jewell certainly was treated unjustly by both law enforcement and the media. However, the film goes out of its way to portray the media and the FBI as unscrupulous and out to destroy Richard’s life. Eastwood is remarkably unsubtle about this, and in order to simplify the story, creates two main ‘villains’ in Shaw and Scruggs. Wilde’s Scruggs is nigh-cartoonishly evil. In trying to clear the name of its title character, Richard Jewell trades in false accusations, something that is regrettable given the quality of the performances in the film.

Recommended? Somewhat. Richard Jewell is worth seeing for the performances, especially Paul Walter Hauser’s, but this recommendation comes with the caveat that one should research the true story and not take the film’s version of events at face value.