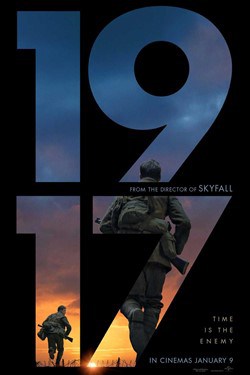 The Low-Down: Hollywood has made many World War II epics, but not quite as many World War I movies, likely because of America’s increased participation in World War II compared to World War I. Still, there are several movies set during the Great War which are considered masterpieces, including All Quiet on the Western Front and Paths of Glory. Sam Mendes, directs and, with Krysty Wilson-Cairns, co-writes this relentless war film that takes place over two days in April 1917.

The Story: In Northern France, British soldiers Lance Corporal Schofield (George MacKay) and Lance Corporal Blake (Dean-Charles Chapman) are tasked with a vital and seemingly insurmountable mission: they must deliver an order from Army Command to tell a battalion of 1600 soldiers to stand down from an assault, as a trap set by the Germans lies in wait for them. Schofield and Blake must cross No Man’s Land into treacherous enemy-controlled territory to deliver the message in time. For Blake, the stakes are personal too, as his older brother is among the soldiers who will die if this information is not conveyed. Braving enemy gunfire and the elements, Schofield and Blake bravely undertake the mission of their lives.

The Good: Filmmakers strive to achieve immersion, to make the audience feel so engrossed in watching the movie that they forget they’re doing so. 1917 achieves this. This is an awards season film, but unlike many prestige movies that vie for the Oscars and other awards, 1917 is far from a stuffy, airless affair. Mendes breathes life into the historical event, closing the 100-plus-year gap between World War I and the present day with an intense and involving epic. He was inspired by the stories of his grandfather Alfred H. Mendes, a Trinidadian World War I veteran and novelist, which increases the personal investment Mendes has in the subject matter. The result is almost akin to a cutting-edge exhibit at a museum, not entirely unlike The Scale of Our War at Te Papa Museum in Wellington, New Zealand, an exhibit that tells the story of the Gallipoli campaign using oversized hyper-realistic sculptures.

There is an immediacy to 1917, but while the movie seems constantly gripping, it is also a masterclass in pacing – there are peaks and valleys, quiet moments and frenetic, intense ones, all carefully yet organically situated within the story. This is a movie that effectively essays anxiety, with the throb of Thomas Newman’s percussion-heavy score signalling dangers around every corner. Several set-pieces are among the most visceral and thrilling of any war film in recent memory, yet Mendes executes them with just enough restraint.

George MacKay anchors the film, with Dean-Charles Chapman right alongside him. The film doesn’t need much to make these characters feel compelling, and just a few interactions between the two establish who they are as soldiers and as people. MacKay is remarkable in the role, especially when the film calls for him to look exhausted and tired. Our two heroes are put through the wringer and face obstacles which are incredible but never implausible.

The Not-So-Good: There’s not a lot that doesn’t work here. Some reviews have cited the lack of character development as a flaw, but this movie is focused on the experience of the characters and on putting the audience in their shoes, and doesn’t need a lot of back-story or a heartfelt monologue about their childhood to accomplish that.

One element of the film that is possibly distracting is its big-name supporting cast. The structure of the movie means that actors like Colin Firth, Benedict Cumberbatch, Mark Strong, Richard Madden and Andrew Scott show up for roughly one scene each. They play people whom our two heroes meet along the way, meaning there is even less to them as characters than to Schofield and Blake. As such, it is possible that their appearances, which almost seem like cameos, might break the immersion, but this did not happen for us.

Unbroken: Spectre, the second Bond film directed by Sam Mendes, opened with a pre-credits sequence shot and edited to look like one continuous take. Mendes ups the ante here, presenting the entirety of 1917 as if it was filmed in one continuous take. This might sound like a gimmick, but the film deploys it as an excellent storytelling tool. The film’s first moment of violence is a small one – Schofield cuts his hand on barbed wire. This reviewer winced more than he normally would, realising this is because the single take approach increases the subjectivity. Cutting away means retreating, however momentarily, to safety. 1917 offers no such safety.

Acclaimed cinematographer Roger Deakins can add yet another notch to his belt, and credit must also go to Steadicam operators like Pete Cavaciuti. Deakins also deployed remote-controlled cameras on wires, flying across the battlefield. Editor Lee Smith deserves plaudits too, as after a while, the game of looking for the hidden cuts becomes just too hard to play. The device of making the film look like it was magically filmed in a single take calls attention to itself because it is hard not to marvel at the technical mastery required to pull it off, and yet, it is also invisible, creating immersion rather than detracting from it.

Recommended? Absolutely. 1917 drops audiences onto the Western Front and is exciting, emotional and harrowing, its visceral impact the result of finely calibrated filmmaking.