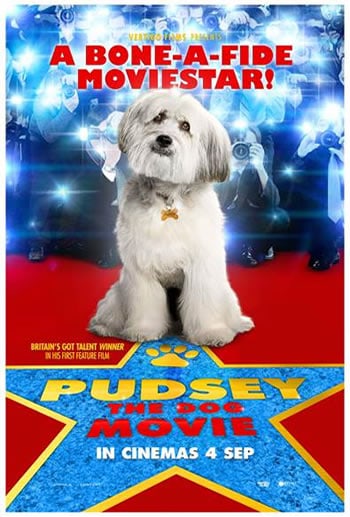 As you might expect from a movie rushed into production to cash in on a phenomenon, Pudsey The Dog: The Movie isn’t particularly well-written and is occasionally quite terrible. All that being said, however, there’s also no denying that the mutt at the heart of this enterprise has a charm all his own, and will likely win over most kids watching the film.

The plot, such as it is, goes something like this: Pudsey (voiced by comedian David Walliams) acts in the movies, but really longs to find a family of his own. Fired from the set of a Hollywood film (insert great in-joke here for fans of black-and-white classic The Thin Man), Pudsey encounters a set of three children – quirky Molly (Izzy Meikle-Small), quippy George (Spike White) and quiet Tommy (Malachy Knights) – just as their mom, Gail (Hynes), has decided to move the entire family to the countryside to start a new life. Still reeling from the loss of their dad, the three kids find comfort in Pudsey’s steadfast friendship. But life in their new village remains complicated by Mr. Thorne (Sessions), their creepy landlord who detests dogs and is keen to monetise the land upon which their cottage sits.

This all plays out in predictable ways: Molly learns to embrace her own weirdness; Tommy finds his voice again; Pudsey spins, dances, mucks about in a giant pie and generally saves the day. We’ve seen it all before, and odds are we’ve seen it done better than it is here. There are jokes which fall disappointingly flat, and jokes made in awkwardly bad taste – most of which revolve around Ken (voiced by Dan Farrell), a pig who believes himself to be a chicken laying an egg. This is the thinly-disguised reason to stuff the film full of genuinely awful poop jokes that will test the patience of even the most forbearing of audience members.

And yet, mediocre as Pudsey resolutely remains, the film is also broadly watchable. Kids will love Pudsey, and adults – especially as the credits roll – will gain an appreciation of just how difficult it was to capture the right shots of the dog to lend emotional weight to the film. The cast is actually fairly decent, even though they’re all playing second fiddle to Pudsey. Knights, in particular, stands out among the younger actors, while fans of British television will enjoy Hynes’ work as always, even while lamenting the fact that she doesn’t get much to do. Sessions, who is forced into any number of odd costumes for dubious comic effect, soldiers through his scenes with remarkable fortitude, which – given the ignominies to which he is subjected – is deserving of its own odd sort of respect.

Not by any means a very good film, Pudsey nevertheless muddles along in a (mostly) inoffensive way. It’s hardly great art, and it’s tough not to be bitterly cynical about the reasons as to why it was made. But, for all that, this is a film made for children and, in this regard, it succeeds reasonably well. Kids will identify with the trials and tribulations of their counterparts in the movie, and will no doubt adore the antics of Pudsey and the rest of the animal cast. The grown-ups in the audience might chafe at the bit after a while, but even they are given a couple of chuckle-worthy, properly surreal moments to enjoy as the film trundles along.

Summary: Not a great movie by conventional standards, but kids will love the charming mutt at its heart.