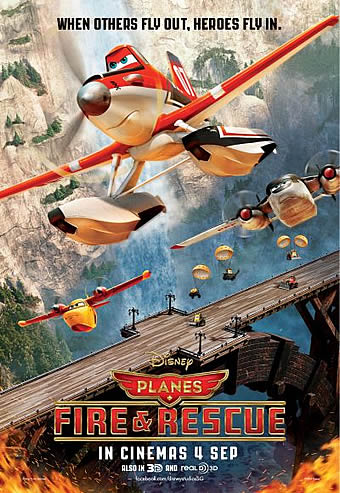 This year, we’ve seen the release of some highly anticipated sequels: Captain America: The Winter Soldier, X-Men: Days Of Future Past, How To Train Your Dragon 2 and Dawn Of The Planet Of The Apes, to name a few. Here’s one that’s not so highly anticipated: the follow-up to last year’s Cars spin-off, Planes. Facing trouble with his gearbox, cropduster-turned-racing-champ Dusty (Cook) is forced to give up racing. Dusty decides to train to become a firefighter, stepping in for aging fire truck Mayday (Holbrook). Reporting for duty at Piston Peak National Park, he is mentored by the gruff Blade Ranger (Harris) and attracts the over-zealous affection of new colleague Lil’ Dipper (Bowen). 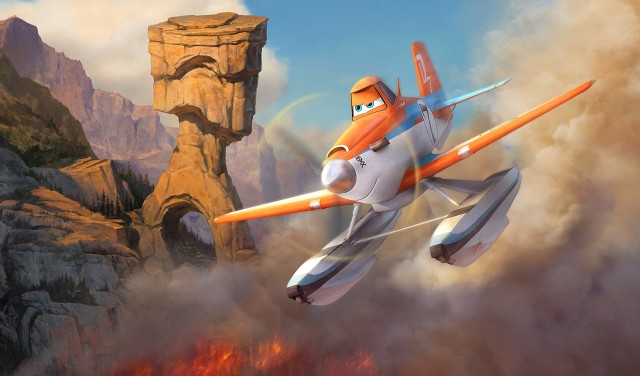 Following the box-office success of Planes, originally intended as a straight-to-video release, one imagines the discussion in the Disney boardroom went something like this: “Okay, so we sold lots of tickets and merchandise on that Cars With Wings movie. Let’s rush out a sequel. What can happen in this one?”

“Uh, he becomes a firefighter?”

“What has that got to do with racing?

Disney has long been held as a bastion of quality family entertainment, but they’re most certainly not above churning out a production-line flick for the sake of making a quick buck. Planes: Fire And Rescue combines another formulaic story with juvenile humour and a few quick, inappropriately dirty gags for the older audience members to snicker at. Just as in the previous film, the animation is not bad at all, given DisneyToon Studios’ reputation as the B-team. The kids will go in for the bright colours and there’s a white-water rapids sequence that’s somewhat cool. However, the film fails to muster up any real energy or sense of peril. This is a movie about fighting fires and, yet, it is largely bereft of thrills or any semblance of danger. Kids want to be excited and wowed too; at least a few will find this film lacklustre, especially when compared with the airborne action of the aforementioned How To Train Your Dragon sequel.

Believe us when we say this: yet again, your personal tolerance threshold for puns will be tested. One of the VIPs at a mountain resort re-opening is “Boat Reynolds”, Dusty exclaims “I kicked As-ton Martin up there!” and apparently, a “George Lexus” produced “Howard The Truck”. Just as the first film had its cringe-inducing national stereotypes with racing planes from various nations, here we get Wes Studi as the Native American helicopter Windlifter, speaking entirely in stock platitudes. There’s not much to say about the voice acting. Dane Cook tries to sound earnest and it’s easier to not want to punch the notoriously unlikeable comedian without seeing his face. Ed Harris does the “harsh taskmaster who actually has a tragic back-story” thing fine; he’s Ed Harris. Julie Bowen squeaks through all her lines as the clingy, borderline stalker-ish Dipper. The vocal cameos by real-life Hollywood couple Jerry Stiller and Anne Meara as two elderly RVs celebrating their anniversary lends the slightest modicum of charm to the often-grating proceedings. “CHoPs”, a take-off on ’70s cop show CHiPs but starring two helicopters, did get a chuckle out of this reviewer.

The film opens with a surprisingly solemn title card that reads, “Dedicated to the courageous firefighters around the world who risk their lives to save the lives of others”, as noble-sounding horns play in the background. What follows are talking planes, bad puns and a moth-eaten story. We have the utmost respect for firefighters and other emergency servicemen and women – if we were firefighters, we’d be feeling at least a little insulted. At one point, Dipper lowers her retractable wing pontoon, squeezing Dusty next to her. “Oh yeah, they’re real,” she purrs. Real classy, DisneyToon Studios. Real classy.

Summary: Solid animation can’t make up for how rushed, formulaic and alternately unfunny and lowbrow Planes: Fire And Rescue is. They can’t all be Frozen.