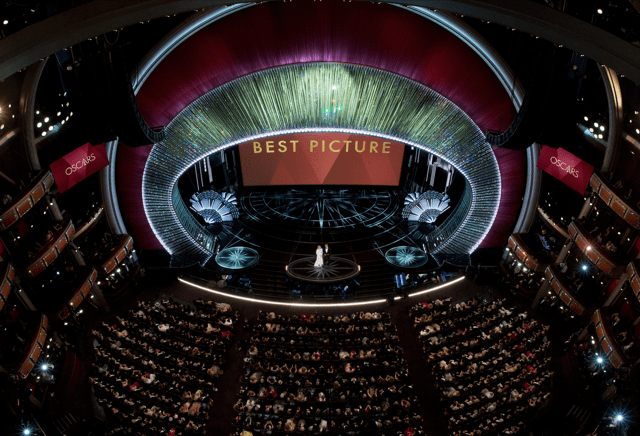 The 89th Academy Awards, which took place on 26 January 2017 at the Dolby Theatre in Hollywood, was proceeding swimmingly. Host Jimmy Kimmel was doing a fine job. Despite capping off an awards season fraught with political tension, the mood in the Dolby Theatre didn’t seem to be one of anger. Impassioned statements were made, but things were kept light enough. The musical La La Land, which had netted 14 nominations, had already clinched six awards. Moonlight, the queer coming-of-age romance, had scored two awards.

Then came the final award of the night.

To commemorate the 50th anniversary of Bonnie and Clyde, stars Warren Beatty and Faye Dunaway presented the Oscar for Best Picture. Beatty opened the envelope, stared at the slip within, and passed it on to Dunaway, who announced that La La Land won.

The majority of pundits had predicted as much. Another Oscars done and dusted, right?

In a flub of grand proportions, it turned out that Moonlight was the actual Best Picture winner. Jordan Horowitz, one of the film’s producers, was in the midst of his acceptance speech when he was abruptly informed that La La Land was mistakenly announced as the winner.

“To hell with dreams. I’m done with it. This is true,” Moonlight director Barry Jenkins said as he tried to process what had just unfolded. The luminaries that filled the theatre were noticeably aghast, with Charlize Theron glowering at the stage. Kimmel attempted to salvage the situation, looking apologetic even though it wasn’t his fault. Beatty clarified that the slip in the envelope read ‘La La Land: Emma Stone’ – a duplicate of the Best Actress envelope, which led to the snafu.

Up until that point, the proceedings had been generally pleasant. Anticipating that this would be a politically-charged ceremony, Kimmel made an effort to keep things light. “Remember last year, when it seemed like the Oscars were racist?” the talk show host quipped. Small parcels of candy and later, cookies and donuts were parachuted down from the Dolby Theatre rafters, much to the delight of the audience. A group of unsuspecting tourists were led from their Star Line tour bus into the Dolby Theatre to interact with the stars. And of course, Kimmel played up his long-standing mock feud with Matt Damon, mocking Damon for opting to star in The Great Wall, which he called a “Chinese ponytail movie” instead of Manchester by the Sea, which Damon remained on as a producer.

Justin Timberlake’s energetic performance of the cheery “Can’t Stop The Feeling!” from Trolls opened the show, which also included several other enjoyable moments. These include Michael J. Fox and Seth Rogen emerging from a DeLorean on the stage, after which Rogen broke out into the Schuyler Sisters song from the musical Hamilton, much to the amusement of Lin-Manuel Miranda. Miranda rapped an original prologue to “How Far I’ll Go” from Moana, performed by the voice of Moana herself, Auli’I Cravalho. The 16-year-old was unfazed when a dancer accidentally bumped against the back of her head with a prop meant to depict ocean waves. Sting performed The Empty Chair from Jim: The James Foley Story, while John Legend sang a medley of the two nominated songs from La La Land, “City of Stars” and “Audition (The Fools Who Dream)”. We were disappointed that Ryan Gosling and Emma Stone did not perform the numbers. Kimmel interacted with child actor Sunny Pawar, who played young Saroo in the biopic Lion. The host hoisted Pawar aloft, ala The Lion King, with Pawar’s father looking on approvingly.

While the tone wasn’t overtly confrontational, presenters and winners alike slipped anti-Trump messages into their speeches. In the lead-up to the Oscars, hackles were raised over the travel ban instated by President Trump, which barred travel to the U.S. from seven predominantly Muslim countries. To protest this, Iranian director Asghar Farhadi boycotted the Oscars, with the other nominees in the Best Foreign Language Film category rallying behind him.

When Farhadi’s film The Salesman won, Iranian-American astronaut, engineer and businesswoman Anousheh Ansari accepted the award on his behalf. “I’m sorry I’m not with you tonight,” Ansari, reading from a prepared statement by Farhadi, said. “My absence is out of respect for the people of my country and those of other six nations who have been disrespected by the inhumane law that bans entry of immigrants to the U.S.”

“As a Mexican, as a Latin American, as a migrant worker, as a human being, I am against any form of wall that wants to separate us,” presenter Gael García Bernal declared emphatically.

“I’m from Italy, I work around the world,” said makeup artist Alessandro Bertolazzi, accepting the Best Makeup and Hairstyling award for Suicide Squad. “This is for all the immigrants.”

The White Helmets, about volunteer rescue workers providing emergency relief in war-torn Syria, clinched the Best Documentary Short Subject award. Director Orlando von Einsiedel and producer Joanna Natasegara implored the audience to rise to their feet, to show the people of Syria that they have not gone unnoticed by the far more privileged.

Another flub besides the Best Picture mix-up heard around the world ocurred during the In Memoriam segment. A picture of Australian producer Jen Chapman, who is alive and well, was shown instead of a photo of the late costume designer Janet Patterson.

On a happier note, Hacksaw Ridge sound mixer Kevin O’Connell finally took home the Oscar. O’Connell had been nominated a whopping 21 times earlier over 33 years, before finally winning and dedicating his Oscar to his late mother. And you thought Leonardo DiCaprio had it bad.

Viola Davis, who was crowned Best Supporting Actress for Fences, delivered an impactful speech that left many in the theatre misty-eyed. She passionately exhorted for filmmakers to “exhume” the stories of “the people who dreamed big and never saw those dreams to fruition,” giving credit to Fences playwright August Wilson, her co-star and director Denzel Washington, and God.

Stone, who was nominated in the Best Supporting Actress category for Birdman, took home the Best Actress Oscar for playing Mia in La La Land. She thanked her co-star Ryan Gosling, calling him “the greatest partner on this crazy adventure.” Stone humbly acknowledged that she “still [has] a lot of growing and learning and work to do” and called the Oscar statue “a really beautiful symbol to continue on that journey and I’m so grateful for that.”

Mahershala Ali, who won the Best Supporting Actor prize for Moonlight, thanked his wife Amatus Sami-Karim, who had given birth to their daughter Bari Najima Ali just four days earlier. “I had so many wonderful teachers,” Ali said. “One thing that they consistently told me is that it wasn’t about you. It’s not about you. It’s about these characters. You’re a servant — you’re in service to these stories and these characters.” Ali became the first Muslim to win an acting Oscar.

Despite rumblings that sexual assault allegations levelled against Casey Affleck a year ago would hurt his shot at the big prize, Affleck won the Best Actor Oscar for Manchester by the Sea.
One of the first people who taught me how to act was Denzel Washington, and I just met him tonight for the first time,” Affleck said. He also thanked long-time friend and producer Damon, while giving a shout-out to his famous older brother. “Ben, I love you,” Affleck said, quipping “You ain’t heavy” in reference to the song “He Ain’t Heavy, He’s Just My Brother”. Brie Larson, a vocal advocate for victims of sexual assault, refused to applaud for Affleck after presenting him with the award.

32-year-old Damien Chazelle made history by being the youngest ever Best Director winner. Making special mention of his girlfriend Olivia Hamilton, the La La Land helmer said “This was a movie about love, and I was lucky enough to fall in love while making it. And it means the world to me that you’re here with me sharing it.” He also thanked producer/composer Justin Hurwitz – the two have known each other since they were 17.

Fire at Sea
I Am Not Your Negro
Life, Animated
WINNER: OJ: Made in America
13th

Land of Mine
A Man Called Ove
WINNER: The Salesman
Tanna
Toni Erdmann

Kubo and the Two Strings
Moana
My Life as a Zucchini
The Red Turtle
WINNER: Zootopia