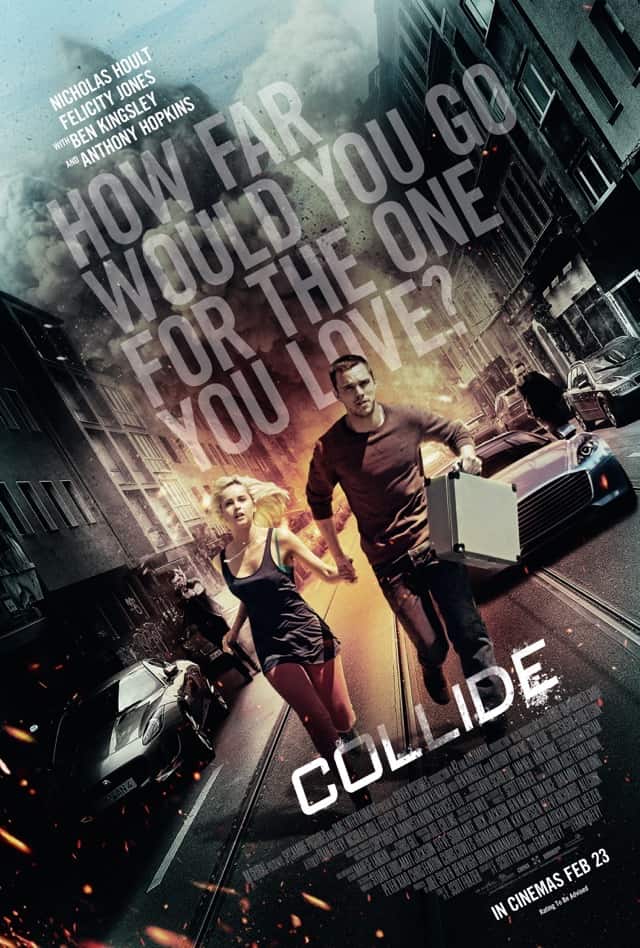 The Fast and Furious franchise may have cornered the market on car-centric action flicks, and while its reigning status remains unchallenged, it’s fun to see what more modestly-budgeted flicks in the same subgenre bring to the table.

Collide centres on Casey (Hoult), an American backpacker who, alongside his friend Matthias (Kenzari), is working for eccentric Turkish drug lord Geran (Kingsley) in Germany. When Casey meets bartender Juliette (Jones), a fellow American, he falls hard for her and swears off his life of crime. Juliette suddenly discovers she has a terminal illness, and Casey decides to plunge back into the murky underworld waters, planning a daring heist to save Juliette’s life. Casey plans to rob a shipment of drugs belonging to kingpin Hagen Kahl (Hopkins), whom the general public regards as a legitimate titan of industry. Casey soon finds out he’s bitten off more than he can chew, as he is ruthlessly pursued by Kahl’s men along the Autobahn, the German highway with no speed limits.

By all counts, Collide is a fairly generic action thriller. With its European locale, Hollywood stars, fast cars, shootouts and slick camera moves, it seems like something Luc Besson would’ve produced, and at times comes off as a slightly less outlandish Transporter movie. Collide is directed by Eran Creevy, who burst onto the scene with his crime drama Shifty and followed it up with the stylish but flawed thriller Welcome to the Punch. Screenwriter F. Scott Frazier penned the deliriously silly xXx: Return of Xander Cage. While Collide doesn’t reach those ludicrously entertaining heights, it’s still decent fun. The central action set piece features some exciting stunt driving. True to its title, there are collisions galore – plus lots and lots of cars flipping through the air. It’s nothing that will be particularly impressive to anyone who’s been fed a steady diet of action movies, but it’s staged with considerable finesse.

The cast is what makes Collide worth a look, if only as a curiosity. If someone told you Nicholas Hoult, Felicity Jones, Ben Kingsley and Anthony Hopkins were in a movie together, your first instinct would likely be that the film in question is a prestige biopic. Zac Efron and Amber Heard were originally cast as Casey and Juliette respectively, and it seems they would fit the characters better. Casey is a roguish ne’er-do-well with a romantic streak, and Juliette is the beguiling, free-spirited love of his life. It is very difficult to argue that Efron and Heard are better actors than Hoult and Jones. Casey seems practically invincible, but Hoult lends the character vulnerability and pathos. The final casting comes off as a little odd: we have Hoult the action hero and Jones the blonde party girl. Their chemistry doesn’t crackle, but watching both actors play against type in what is mostly a standard action movie does have its moments.

Hopkins and Kingsley are consummate scene-stealers, and any action movie should be so lucky as to have them play duelling crime lords. Hopkins gets to give a Bond villain speech, making us wonder why he hasn’t yet played an actual Bond villain. In the middle of said speech, he busts out a completely unexpected, very amusing impression of an 80s action star. Kingsley is having a full-on good time as the loopy Geran, chewing scenery left and right and being unabashedly silly. We were expecting that Hopkins and Kingsley would do one, maybe two scenes each before leaving to collect their paycheques, but both have substantial screen time and are not phoning it in in the slightest.

Collide is an unremarkable, unambitious action movie that’s made entertaining by its cast. It’s not the kind of movie one would expect two Oscar winners and an Oscar nominee to pop up in, but therein lies the novelty. There’s some charm to its silliness and the action sequences pass muster.

Summary: Collide is built from familiar parts, but is far from a car wreck thanks to an overqualified cast.