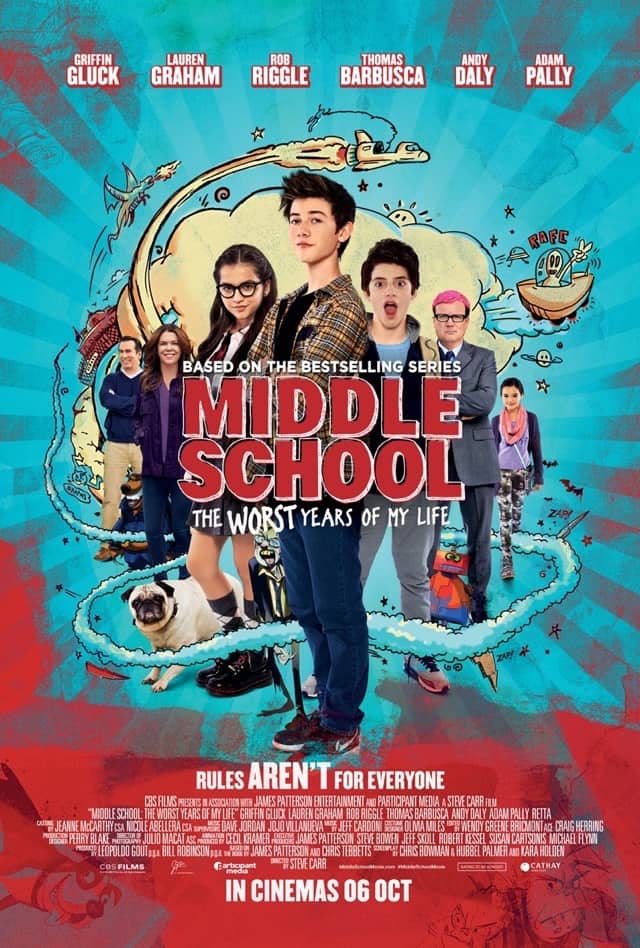 All Rafe Katchadourian (Gluck) wants to do is draw. After suffering a death in the family, Rafe and his sister Georgia (Nisenson) are going through a difficult time. Rafe is transferred to Hill Village Middle School, where he runs afoul of the unreasonable, sadistic principal Mr. Dwight (Daly) and vice-principal Ms. Stricker (Retta). Thankfully, Rafe’s teacher Mr. Teller (Pally) encourages Rafe’s artistic pursuits. Rafe and his best friend Leo (Barbusca) devise a scheme to systematically defy all the rules inscribed in Mr. Dwight’s precious Code of Conduct. Aside from being hounded by the principal and school bullies, Rafe has to contend with Carl (Riggle), his mother Julia’s (Graham) uncouth ne’er-do-well boyfriend. In the meantime, romance blossoms, as Rafe finds himself drawn to Jeanne Galleta (Moner), the intelligent president (and only member of) the school’s A.V. Club.

Middle School: The Worst Years of My Life is based on the children’s novel of the same name by James Patterson and Chris Tebbett. On the cover of the book, you’ll notice that Patterson’s name is printed in huge font, while Tebbett’s is barely noticeable. Patterson is best known for his Alex Cross detective series but has branched out into books for younger readers, including the Middle School books and the YA series Maximum Ride. Patterson often catches flack for taking books written by ghost-writers and marketing them as his own work, operating what’s been called a ‘bestseller factory’. Suffice it to say that he seems keener on cultivating his lucrative brand name than actually writing, but he’s far from the only author who’s like that.

With all that in mind, this reviewer is fine with the Middle School movie. It trades in many typical stock types and plot devices: our protagonist is a creative daydreamer, the principal is a cruel hard-ass, there’s one nice teacher, mum’s new boyfriend is an oafish lout, there’s a cute, bright girl he has a crush on, and so on. However, the film takes a stand against the stifling of children’s creative tendencies by the school system, with the principal obsessing about Hill Village’s ranking in an upcoming standardised test. Large banners hang above the lockers in the hallways, with the slogans ‘RESPECT AUTHORITY’, ‘OBEY THE RULES’ and, most amusingly, ‘ASSIMILATE’ emblazoned upon them. Seeing as this reviewer is from Singapore, where preoccupation with academic results and conformity to standards is practically mandatory, it does strike a chord.

As can be expected of a film that more or less looks like it belongs on Nickelodeon or the Disney Channel, there isn’t too much subtlety to be found. Nearly all the performances are comically exaggerated and the screenplay by Chris Bowman, Hubbel Palmer and Kara Holden sounds cynical and smart-alecky at times. Mentions of a ‘hot stepmum’ and an allusion to Kim Kardashian’s rear end feel like jokes that exist so the writers could keep themselves amused. The animated interludes which depict Rafe’s drawings coming to life are fun, though. There’s a nice old-school quality to the largely-2D animation created by Duncan Studios, which is headed up by former Disney animator Ken Duncan.

Gluck is affable and sensitive as Rafe, turning in a subdued performance when compared to the broad comedy that surrounds him. He is believable as a quiet artistic type; what’s less believable are the elaborate protest art pranks that he executes, which seem logistically implausible at best. Barbusca does get on the nerves a little as the garrulous, upbeat best friend, but there is a reveal that lends the relationship between Rafe and Leo some meaning. While Georgia is, for the most part, the ‘little sister with attitude’, Nisenson pulls off a surprisingly heavy emotional scene. 100 Things to Do Before High School’s Moner plays the millennial equivalent to the hippie who would be handing out leaflets on campus in the ’70s, and she is immensely likeable as Jeanne.

Lauren Graham plays a typical Lauren Graham character and Rob Riggle plays a typical Rob Riggle character. Julia is sweet, well-meaning and trying to work through grief, while Carl is obnoxious, self-absorbed and mean to those around him. Daly has a ball playing the eminently hateable villain, with Retta backing him up as the imposing second-in-command. Pally’s character is pretty much every ‘designated cool teacher’ ever: his establishing character moment involves him using hip-hop analogies to explain the concept of fair trade to his class. Efren Ramirez has a few scene-stealing moments as the under-appreciated janitor Gus.

Middle School: The Worst Years of My Life suffers from some tonal issues and there are moments where it leans too strongly into the schmaltz. This reviewer will admit to tearing up during the final scene, cheesy as it is. While some may take umbrage with what can be seen as an incitement to revolution against school principals, its message of the valuing and nurturing of creativity in children and thinking beyond the textbook is a worthy one.

Summary: Middle School might be as over-the-top and silly as your average kid-aimed school comedy, but its celebration of creativity and takedown of an exams-obsessed school system do have merit.