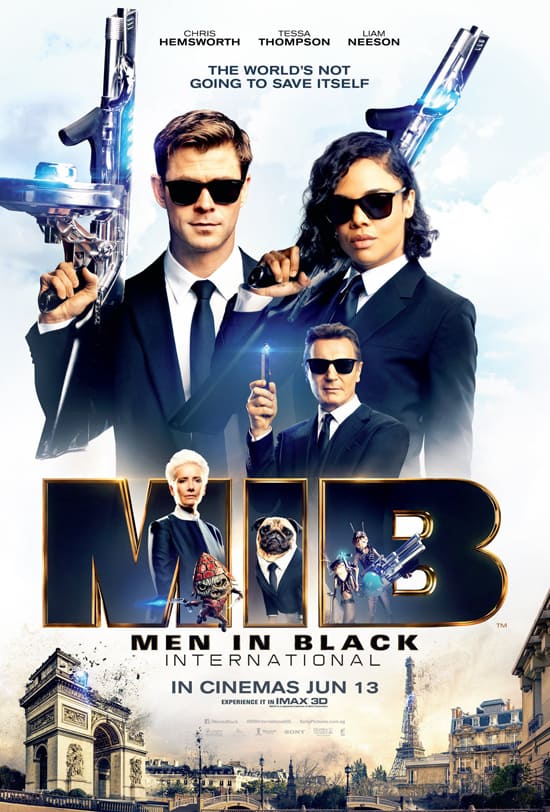 The Low-Down: 22 years since the property’s first instalment and seven years since the supposed final of its trilogy, Men In Black: International stars a fresh cast led by the dynamic duo from Thor: Ragnarok — Chris Hemsworth and Tessa Thompson in a reboot of the MIB universe. This new addition is more of a continuation than one that breaks the rules and very much to its own detriment. While there are some dazzling action setpieces and witty humour nailed mostly by Thompson and her tiny alien sidekick Pawny (voiced by Kumail Nanjiani, The Big Sick), the movie doesn’t introduce anything inventive to the franchise. That said, it’s still a pretty good popcorn movie and treat for fans.

The Story: New Yorker Molly (Thompson) is on a 20-odd-year hunt for the MIB hoping to become one of them after witnessing them in action when she was a kid. Molly finally sneaks into the New York facility, only to be detained by Agent O (Emma Thompson) but she manages to charm her and was accepted as a probationary Agent M. She joins seasoned and cocky Agent H (Hemsworth) on an escort mission and gets her hands on an alien puzzle box of sorts. The duo goes from an alien disco in London to the Sahara Desert and even an island in Naples, to find out the purpose of the alien contraption (and to justify the movie’s title).

The Good: When MIB: International balances the humour with some light action, the feature is at its best. The Thompson and Hemsworth duo isn’t the perfect Smith-Jones combo but manages to pull off some of the funniest scenes and dialogue with finesse and flair. Both of them look like natural partners on screen and sometimes feel like you’re watching a stand-up featuring them. Of course, Nanjiani’s Pawny does contribute quite a bit to the humour, and some might even say he is the main highlight whenever his character is onscreen.

The Not-So-Good: Unfortunately, MIB: International goes by the formula that has shaped its predecessors and the result is “just fine”. It’s a pity Liam Neeson’s role as High T, MIB London Division head, falls flat particularly because of how he doesn’t sell (and fit in) the MIB vibe. It’s most probably not his fault since the character doesn’t give him much to work with. Above all, though, there’s no “wow” factor, placing this movie alongside many of the bland alien flicks that don’t use CGI creatively. Except for one scene where Agents M and H play around with several plasma rifles and launchers, we always see the same boring weapons.

Knock-Out Sequence: The melee combat scenes between Thompson and Rebecca Ferguson’s Riza, and Hemsworth and Riza’s alien bodyguard are one of the more well-choreographed action sequences that actually keep the viewers engaged with fairly skilful intercutting and good technicals. It’s a pity Pawny didn’t get much to do here.

Watch Out For: The witty dialogue between Hemsworth, Thompson, and Pawny. Not every line lands, but when they do, you’ll find yourself laughing with the crowd and feeling a sudden desire to own a hamster-size chess-armored alien – Pawny.

Recommended? Yes for the action and the few effective comedic scenes. MIB: International won’t be a memorable addition to the franchise but an enjoyable and brainless ride. Don’t expect to be dazzled, and you may be pleasantly entertained.