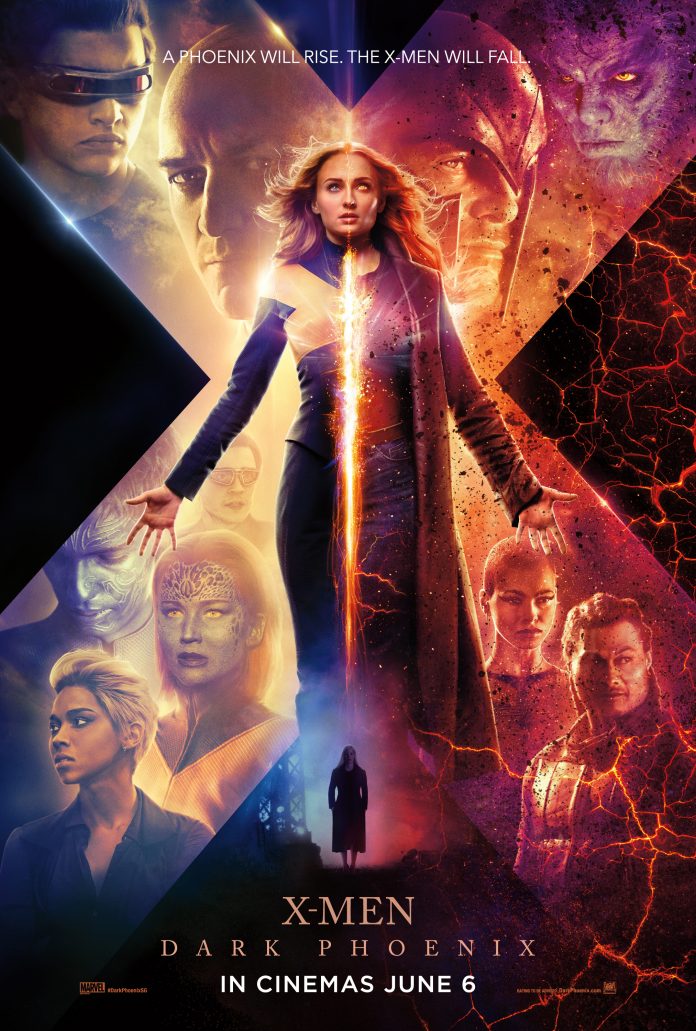 The Low-Down: In the age of the Marvel Cinematic Universe (MCU) and the Avengers, it can be hard to forget that the X-Men were actually here first. The hyper-kinetic, gloriously operatic X-Men (2000) made blockbuster superhero movies cool again – plucking several of Marvel Comics’ best characters out of cult comic books and launching them into the mainstream. It’s a shame that such an iconic franchise is ending with a whimper rather than a bang. X-Men: Dark Phoenix is the final installment in the series – because it has to be, now that Fox is merging with Disney/Marvel. But the film does itself no favours in revisiting a storyline that was already told, albeit rather poorly, in The Last Stand (2006).

The Story: We’ve already met the ridiculously powerful cosmic force that is the Phoenix: it latched onto Famke Janssen’s Jean Grey over a decade ago, and decimated a bunch of fan-favourite characters in its fiery wake. This time around, the Phoenix finds a host in Sophie Turner’s younger Jean Grey, unlocking past trauma and present angst as it burns through the childhood defenses put in place in Jean’s mind by Professor Charles Xavier (James McAvoy). As Jean goes on the run, her former allies rush to find her – some set on protecting her, others on eliminating the threat she poses to their safety and loved ones. But can they save her from Vuk (Jessica Chastain), the ice-cold leader of an alien race hellbent on claiming the Phoenix’s power for herself?

The Good: There’s actually a decent amount of good seeded throughout Dark Phoenix. Most intriguing of all is the film’s darker take on Xavier – he’s usually portrayed as an unequivocally good (and therefore slightly boring) character, devoted to his young charges and leading the fight for a better, more unbiased world. Paired with a fascinating, almost petulant performance from McAvoy, Dark Phoenix reminds us that, sometimes, the road to Hell on Earth is paved with good intentions. Long-time X-Men writer Simon Kinberg makes his directorial debut, and proves more than equal to the task of whipping up fantastically thrilling action sequences. He peppers the film with plenty of lovely imagery and aesthetic touches: from Jean’s hair taking on a life of its own when she’s in Phoenix mode, to Quicksilver (Evan Peters) speed-climbing a whirlwind of debris.

The Not-So-Good: It’s hard to shake the feeling that there isn’t much reason for this film to exist, other than giving Kinberg the opportunity to take a second stab at the same story. (He co-wrote The Last Stand, to eternal fan derision.) Dark Phoenix edges closer to the classic Chris Claremont storyline in the comics, but it never quite fulfils its own potential. The Xavier subplot doesn’t get anywhere near the true depth or darkness it deserves. Chastain is brilliant casting, but for no real reason. If the screenplay had supported her better, Chastain could have transformed Vuk into a properly sympathetic antagonist; instead, she’s stuck in the key of one-dimensional supervillain. We get a peek at Genosha, a mutant safe haven under the governance of Erik Lensherr/Magneto (Michael Fassbender) – but we don’t linger there.

Phoenix Rising: Turner isn’t given much to do other than glower and fret, but she does it all well enough. The trouble is Jean Grey as a character. In all her incarnations, including in the comics, she gains immeasurable power, but loses all agency. She seems strong, but is actually a frustratingly passive protagonist. That’s compounded here by literally everyone around her constantly telling her what to do – from Charles, Erik and the annoyingly maternal Raven Darkholme (Jennifer Lawrence), to her well-meaning boyfriend, Scott Summers (Tye Sheridan), and the relentless Vuk. Is Jean supposed to master her emotions, to repress her powers, to stay quiet? Or is she supposed to unleash them, to revel in them, to metaphorically shout about her remarkable abilities? It’s a conundrum that exists in the source material – and this film makes a strong case for retiring Claremont’s Dark Phoenix for good.

Recommended? If you’ve ever loved the X-Men, you’ll probably want to say goodbye to this incarnation of these beloved characters before they’re resurrected in the MCU. But this is a decidedly middling installment in the franchise – not as dreadful as Apocalypse, but nowhere near the giddy heights of X-Men or Logan.