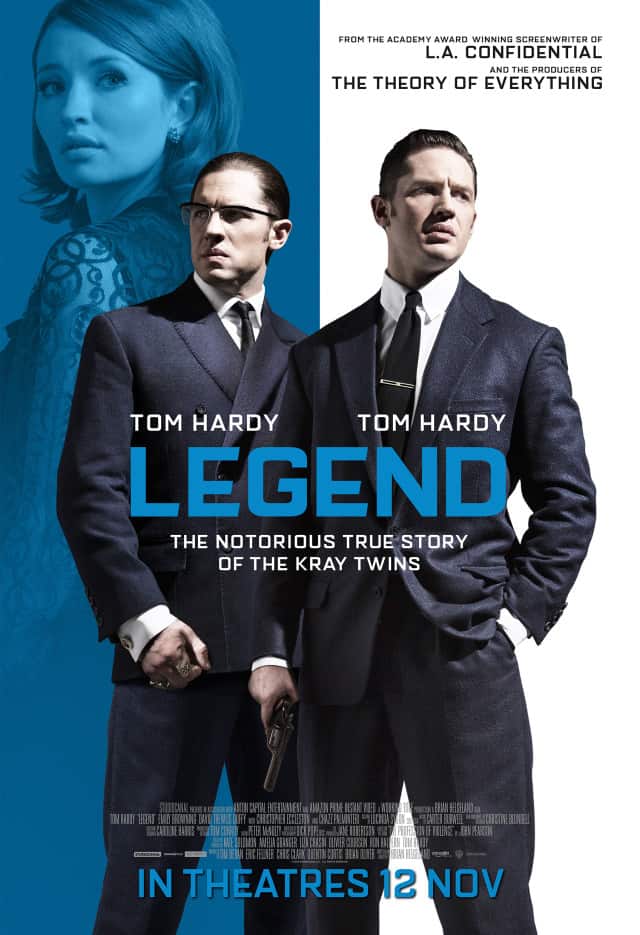 After going Mad earlier this year, Tom Hardy’s going Kray-zy in this gangster biopic. Hardy plays both Ronnie and Reggie Kray, identical twins who ruled the London criminal underworld in the 1960s. Reggie is the savvy businessman, while institutionalised Ronnie is the unhinged, unpredictable loose cannon. After threatening a psychiatrist into declaring Ronnie sane, the pair rise through the ranks, running protection rackets and buying up nightclubs. Reggie falls in love with Frances Shea (Browning), who eventually marries him, much to the disapproval of her mother (Tara Fitzgerald). In the meantime, Ronnie openly pursues a relationship with Teddy (Egerton). The twins become business associates of Philadelphia crime family don Angelo Bruno (Palminteri) and are pursued by Scotland Yard Detective Superintendent Leonard “Nipper” Read (Eccleston), who’s intent on putting an end to their reign of terror. 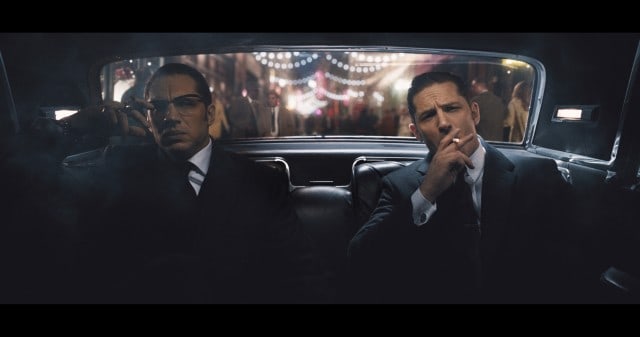 Legend is based on John Pearson’s biography, The Profession Of Violence: The Rise And Fall Of The Kray Twins. The twins were the subject of 1990 biopic The Krays, as well as the straight-to-DVD 2015 film The Rise Of The Krays, the latter apparently made to ride on the coattails of this film. Writer-director Brian Helgeland earned his crime movie bona-fides with 1997’s Oscar-winning L.A. Confidential and the Kray twins’ colourful history and trail of violence makes them attractive true-crime biopic subjects. While Legend is a superb showcase for its star, it falls short in almost all other departments. Like many period gangster movies, Legend all too frequently invokes the classics of the genre while feeling like a mere echo. Its portrayal of ’60s London is at once stylish and slightly artificial, Helgeland never achieving the authenticity he strives for.

The film falls into a pattern of Ronnie doing something despicable and outrageous with Reggie cleaning up after him, the twins often coming into conflict with each other and those around them. It’s odd: even though the film spends a lot of time with its central characters, it doesn’t dig very deep into the psychology of the twins and, by its conclusion, we actually understand very little about them. It is eventful, but sometimes difficult to follow, with everything tied together in a voiceover by Browning’s Frances. The voice-over is often heavy-handed and there are some clumsy attempts at breaking the fourth wall. In the end, it feels like the main purpose this voice-over serves is to give Frances some semblance of agency since, for most of the film, she is just there, just “the wife”.

Hardy has emerged as an A-lister who can headline big-budget blockbusters and prestige dramas with equal ease, and his dual role here is plenty impressive. Of course it’s gimmicky, but it’s a gimmick that works. With the help of body double Jacob Tomuri (who was Hardy’s stunt double in Mad Max: Fury Road and the upcoming The Revenant) and some clever visual-effects trickery, two distinct versions of the actor co-exist and, after a while, the sleight-of-hand becomes truly seamless. When Ronnie and Reggie come to blows during an especially heated argument, the fight is spectacularly convincing. Affecting an East End accent, Hardy is able to play both twins as distinct characters, the end result far less stilted than when Armie Hammer’s head was duplicated and pasted onto Josh Pence’s body to play the Winklevoss twins in The Social Network. Reggie is the tortured anti-hero and Ronnie is the wild-eyed, maladjusted psychopath. In very loose terms, Reggie is the “good” twin, though that is, of course, relative. 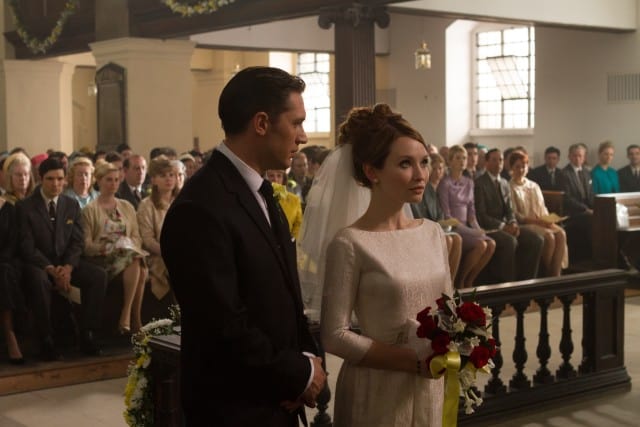 The aforementioned Browning looks gorgeous, appropriately retro-chic in a selection of ’60s ensembles, but is given little to do beyond fretting over her husband’s illegal activities. Eccleston huffs and puffs as the cop on the Krays’ case, but Helgeland doesn’t seem too interested in the cat-and-mouse cops vs. criminals aspect of the story. Egerton, having made a splash in Kingsman: The Secret Service earlier this year, is also under-used as Ron’s boy toy. Paul Bettany pops up very briefly as rival gangster Charlie Richardson. The British character actors who make up the Krays’ criminal posse come off as sufficiently tough and unsavoury, with Palminteri adding a touch of American mob movie cred. 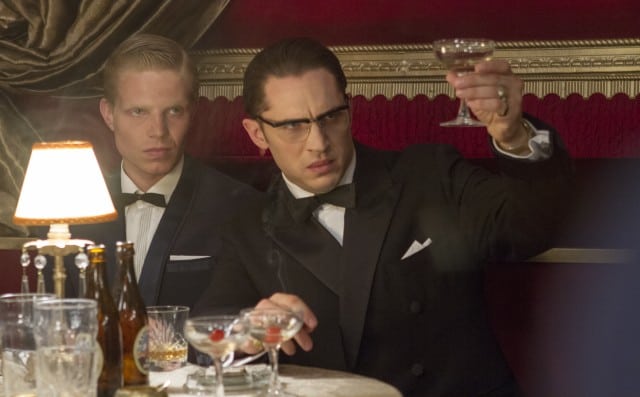 Given how Legend has been positioned as an awards contender, the film ends up surprisingly superficial. Even more so than other gangster films, it revolves around relationships, given its main characters are twins, but few of those relationships are satisfyingly developed and explored. Slick but formulaic and often unfocused, Legend offers very little real insight into the lives of the fascinating Kray twins.

Summary: Tom Hardy’s dual role is dynamite stuff, but Legend is hampered by its heightened glossiness and is ultimately too shallow to pass as a gripping biopic.