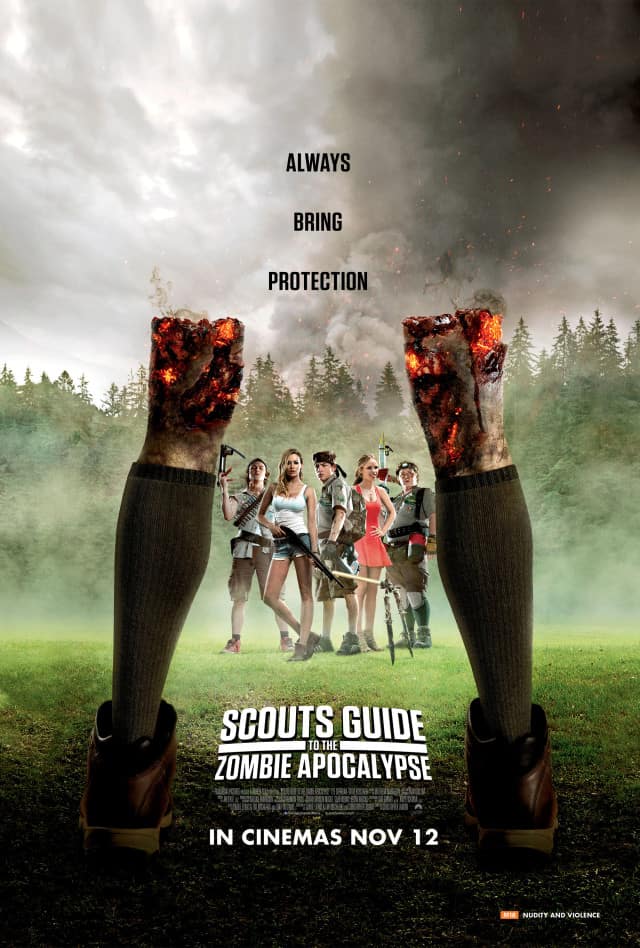 Simple guidelines for any scout to follow in case of a zombie outbreak: be prepared in body, be prepared in mind and try to keep said mind from being devoured when the undead invade. In this horror comedy, Ben (Sheridan) and his friend Carter (Miller) are tired of being scouts, earning the mockery of their peers. Scout Leader Rogers (Koechner), clearly already dead inside, is the leader of their little group. The only reason they’re still scouts is to humour their friend Augie (Morgan). During a camp out, Carter convinces Ben to ditch Augie to head for a secret party which all the cool kids, including Carter’s sister Kendall (Sage) and jock Jeff (Schwarzenegger), are attending. On their way to the party, Ben and Carter realise something is amiss, when they’re attacked by hordes of zombies following an accident at a genetics lab. Strip club waitress Denise (Dumont), handy with a shotgun, helps get Carter, Ben and Augie to safety as they fight for their lives against the savage infected. 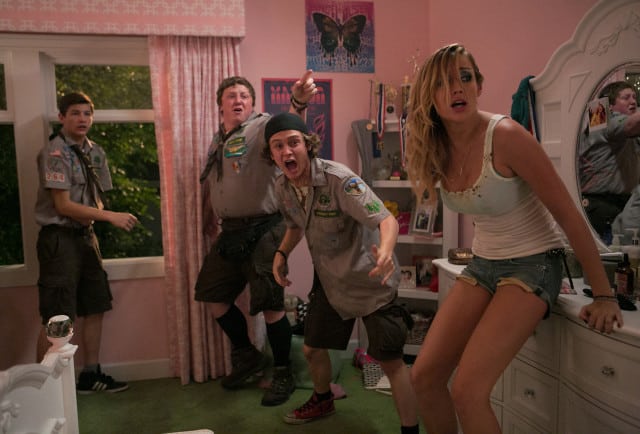 Scouts Guide to the Zombie Apocalypse is one of those movies where you know what you’re getting into based on the title: there’ll be wanton goofiness, lots of gooey viscera and gratuitous nudity for good measure. Director/co-writer Christopher Landon, who’s penned multiple Paranormal Activity films and directed one, turns his attention to a more gleefully exploitative brand of horror, reminiscent of the low-budget splatter flicks of the 80s. However, the fact that Scouts Guide isn’t aiming particularly high doesn’t mean it’s exempt from criticism for stooping so low. Aimed squarely at easily-amused, libidinous, and perhaps not especially bright teenagers, the movie is painfully lowbrow and often vulgar, packed with gross-out gags that are intended to be shocking but come off as awkwardly unfunny instead. Interestingly, co-writers Carrie Evans and Emi Mochizuki wrote the very G-rated College Road Trip, and Scouts Guide was initially conceived as a kid-friendly PG-13 film. It’s quite possible it would have been even worse.

The way that Scouts Guide panders to its intended demographic is extremely cynical, in a flailing “hey, this is what the teenagers wanna see, right?” sort of way. We’re certainly not asking for high art, and this reviewer will admit that he was amused by a bizarre scene in which someone sings a Britney Spears ditty with a zombie, but being constantly pelted with crass silliness isn’t our idea of a good time. There is no invention, no reworking the formula, no witty commentary, just lazy regurgitation of the type of violence and sex you’d try to get a get a glimpse of behind your parents’ back. The most worthwhile element of the film is the old-fashioned, tactile and supremely gory makeup effects, devised by Tony Gardner. Gardner was nominated for an Oscar for Jackass Presents: Bad Grandpa, and his first professional gig was assisting Rick Baker on the set of the Thriller music video, so he brings some pedigree to the otherwise embarrassing enterprise.

Sheridan is earnest in as bland as possible a manner, playing the straight-arrow default leader protagonist. This suggests he’ll do just fine as Cyclops in next year’s X-Men: Apocalypse. Miller plays the stereotype to the hilt as the slacker best friend, coming off far more annoying than funny at every turn. Morgan, who’s supposed the put-upon loser who tags along in films of this sort, does manage to be sympathetic. Dumont’s Denise is this idealised fantasy girl, plucky, badass and smoking hot. It’s empowerment as envisioned by a 13 year old – Dumont spends the whole movie in a tight white tank top and tiny denim shorts as the camera leers. Dumont doesn’t quite have the chops to pull it off, but at least she looks like she’s having fun. Patrick Schwarzenegger, scion of Arnold, is a passable condescending jock. Koechner had more to do in Piranha 3DD and we’ve got to feel sorry for American national treasure Cloris Leachman. The 89-year-old veteran actress really didn’t have to say yes to this dreck, but at least she’s sporting.

There is a place in the cinematic firmament for dumb movies packed with blood, guts and boobs to cater to post-pubescent male audiences, but they don’t have to be quite as pointless as this. Zombieland treaded similar territory, albeit with more wit and verve. The animated film ParaNorman, with its gang of kids battling a zombie uprising, was far funnier and managed to be genuinely poignant without pandering to the basest instincts. If you’re a gore-hound, the grisly effects work will hold your interest, but you’ll have seen it done better elsewhere. If you go in for juvenile gross-out gags and excessive ribaldry, then we’re not stopping you from leaving your brain (and any sense of taste) at the door. 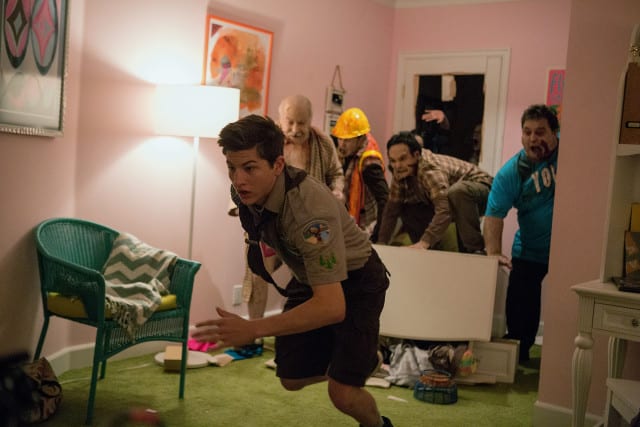 Summary: This sophomoric horror comedy panders to the lowest common denominator instead of displaying any genuine affection for or clever self-awareness of the genre.