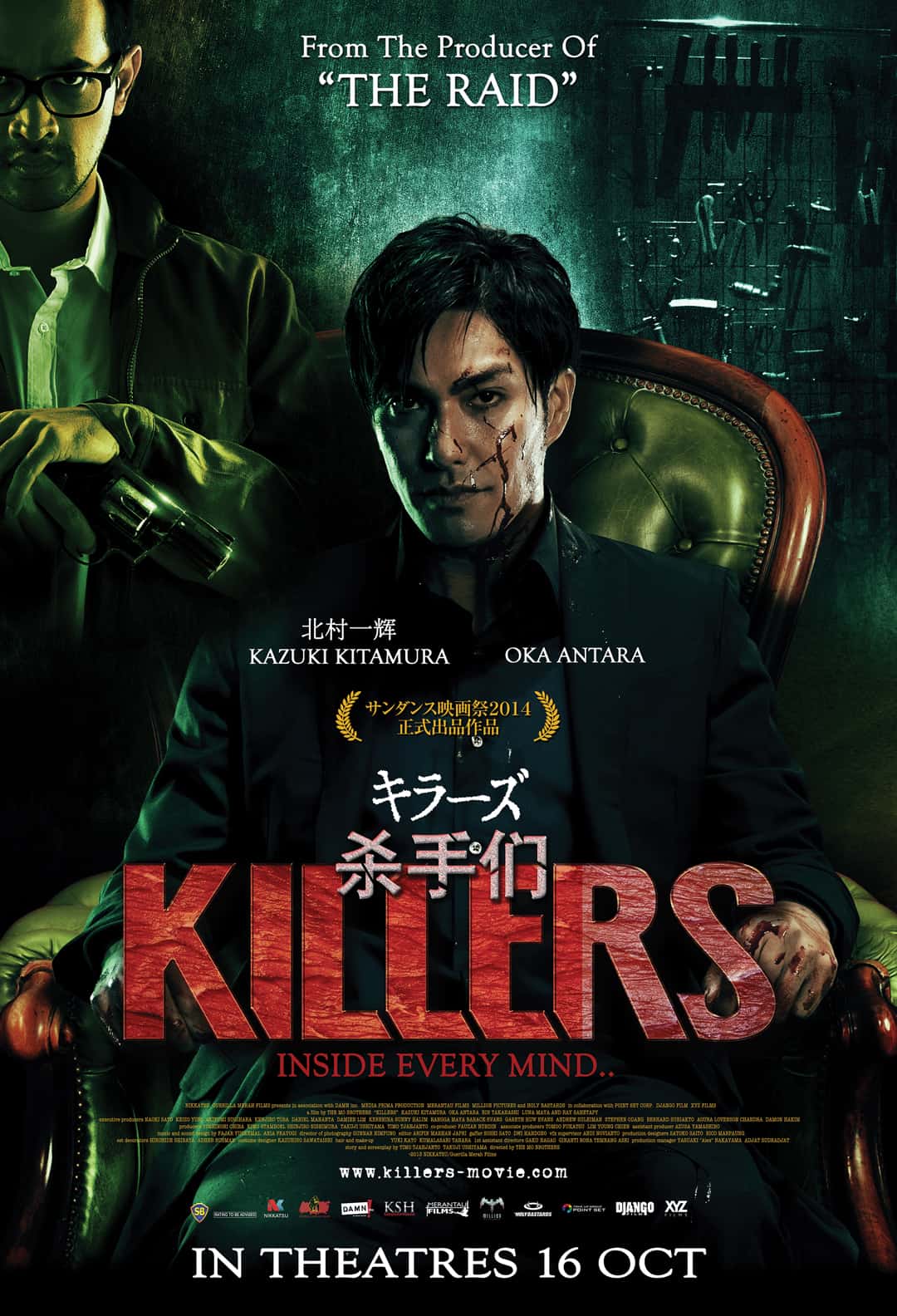 First, put the Ashton Kutcher and Katherine Heigl-starring travesty far from your mind, because this Killers is worlds away from that one. In this psychological thriller, the paths of a Japanese serial killer and an Indonesian investigative journalist violently collide. In Tokyo, Nomura Shuhei (Kitamura) is a slick, charming psychopath who tortures and murders young women, uploading the resulting snuff films onto the internet. In Jakarta, Baru Aditya (Antara) is a reporter who is following the trial of corrupt magnate Dharma (Sahetapy), frustrated that justice isn’t served. After coming across one of Nomura’s videos and following a chance encounter with a pair of muggers, Baru begins down the dark path of committing murders and recording them. However, the targets are men like Dharma and his ilk and not the innocent women Nomura favours. Nomura contacts Baru over the internet, egging him on and viewing him as a mentee. It is not long before Baru realises the depths of Nomura’s depravity, but by then it seems it’s too late for him to claw his way out. 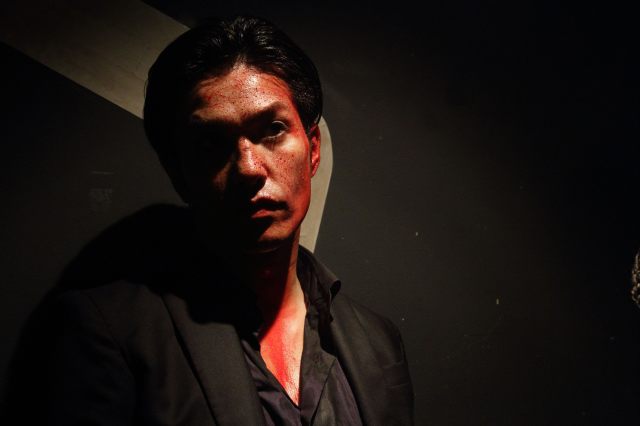 This Japanese-Indonesian co-production is advertised as coming from the producers of The Raid, with Gareth Evans’ Merantau Films being one of the production companies involved. Helming Killers is the directorial duo The Mo Brothers. Comprising Timo Tjahjanto and Kimo Stamboel, they aren’t actual blood-related brothers but it seems blood does figure heavily in this partnership, judging by the amounts of gore in this film. Tjahjanto contributed segments to the horror anthology films V/H/S and The ABCs of Death and this one is indeed intense and disturbing. Apparently, the original concept for the film was that of a serial killer from Japan and another from Indonesia “competing” for supremacy. The end result is something far more sophisticated, a riveting meditation on that age-old question “what is it that makes a man become a killer?” 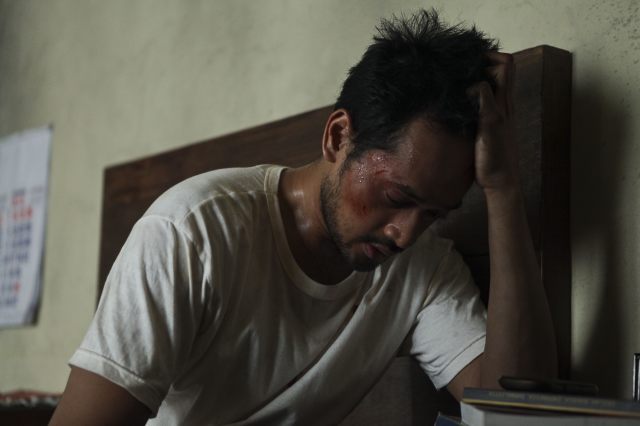 Killers possesses a unique structure, with the story’s focus alternating between the two main characters who, for the bulk of the film, only briefly interact via webcam and live in two different countries. The Indonesian section of the film is entirely in Bahasa Indonesia while the Japanese section is in Japanese, with Nomura and Bayu communicating in English during their web chats. The environments and cultures of Tokyo and Jakarta are cleverly contrasted and despite switching between two very different locales, Killers never feels disjointed. It is almost always the case that a films questioning the consumption of violence, by dint of depicting violence itself, are a part of the “problem” and can’t have their cake and eat it too. Yes, Killers is a lurid, graphic film and this reviewer did find much of it difficult to stomach, but this reviewer never felt that it was outright “torture porn” or that it settled for any easy answers when dealing with the moral ethical quandaries such as “is murder ever actually justifiable?” 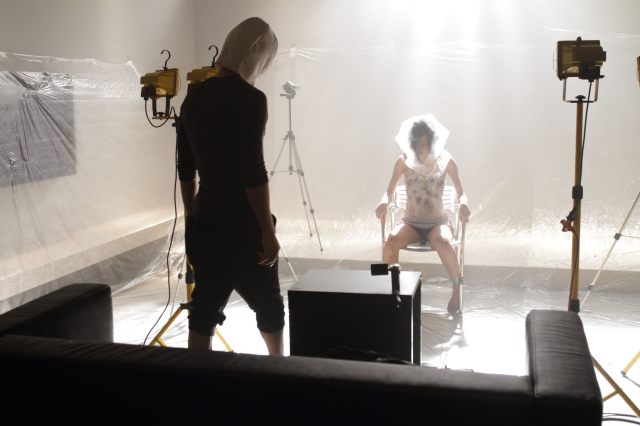 Both leads deliver stirring performances. Kitamura gets the role that might be considered more fun, with shades of American Psycho or Dexter evident in his portrayal of a psychopath who’s always dressed to kill in the sharpest suits and who has a “murder annexe” to his bachelor pad. The relationship Nomura forms with the florist Hisae (Takanashi) lends the character several layers and there is of course the niggling sense of dread that he can kill this woman any time he wants. The role could’ve been played in a cartoonishly broad manner and while Kitamura does visibly relish the chance to play this unhinged character, he resists indulging in full-on scenery chewing. Oka Antara is very sympathetic as the antihero whose journey from regular family man to something far more sinister is frightening and heart-rending all at once. His frustration and desire to take the law into his own hands feels warranted but we fear from him as we see his sanity slip through his fingers. When these two finally meet, it’s a dynamite nail-biter of an ending. 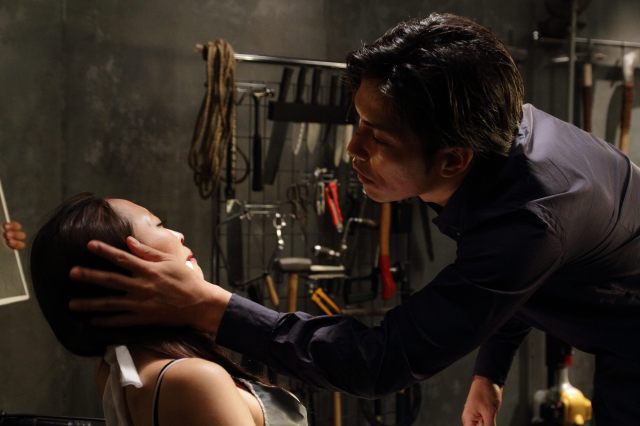 A polished, well-made film that truly gets under one’s skin, the production values are solid, Gunnar Nimpuno’s cinematography and the score by Fajar Yuskemal and Aria Prayogi ramping up that “pit of your stomach” sense of dread. This is the kind of film where a smart, disturbing concept could’ve been let down by a clumsy execution but The Mo Brothers demonstrate a firm hold on the material all the way through. At 137 minutes, it’s something of a slow burn but the parallel storylines did have my attention in a vice-like grip. This efficient thriller will be hanging around in the back of your mind for a good while after you’ve seen it.

Summary: An intelligent, edgy and frightening psychological thriller, Killers is a sophisticated, unique entry in the serial killer movie subgenre.