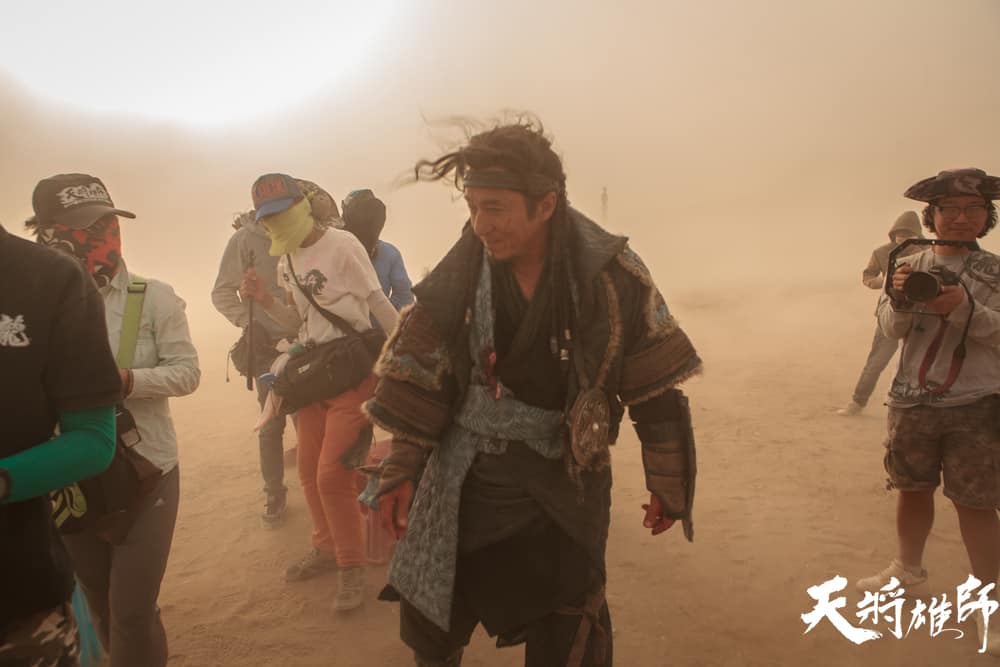 Dragon Blade, a super legend blockbuster scheduled to be released during the 2015 Chinese New Year, is directed by Daniel Lee, presented by and staring Jackie Chan together with Hollywood stars John Cusack and Adrien Brody, Korean pop idol Choi Siwon and the famous Chinese actors, including Chopsticks Brothers (Xiao Yang and Wang Taili), Lin Peng and Wang Ruoxin. Currently, the crew are shooting in Aksai. On 30th July, they met such a fierce sandstorm that one could not see further than two meters ahead. As a result, more than 700 crew members were turned into “sandmen”.

Aksai is situated between the borders of Ganshu, Qinghai and Xinjiang Provinces. In Aksai, the air is dry while the winds are not only constant but strong throughout the year. During the shooting, their work is often disrupted by sandstorms. According to the crew members, in the past two months, they have met three big sandstorms as well as countless small ones. The numbers of tents and pieces of equipment destroyed as a result are too large to count. Since they need to shoot many scenes in which herds of horses are galloping across the desert, sandstorms prove to be a big trouble that cannot be ignored. In addition, the extreme high temperature is another problem that needs solving. Before a small sandstorm strikes, the surface temperature could rise to higher than 40 °C, and it would reach even higher than 50 °C during a big one.

It is understood that the sandstorm that hit the crew at 7.20pm on 30th July was the biggest they have encountered so far. At that time, camera units A and B were operating at the same time. All of a sudden, some crew members spotted that gradually, the mountains in the distance were getting blurred and soon strong winds began to blow. In just a few minutes, the sandstorm hit the crew. They were shooting a grand scene in which the Roman troops were arriving, however, the winds were so strong that through the camera, the actors could no longer be seen as it was completely blocked by the sand. Moreover, the surface temperature shot up to 52 °C; a truly unbearable figure. Jackie Chan hurriedly asked everyone to take shelter, waiting for the storm to subside before resuming filming. 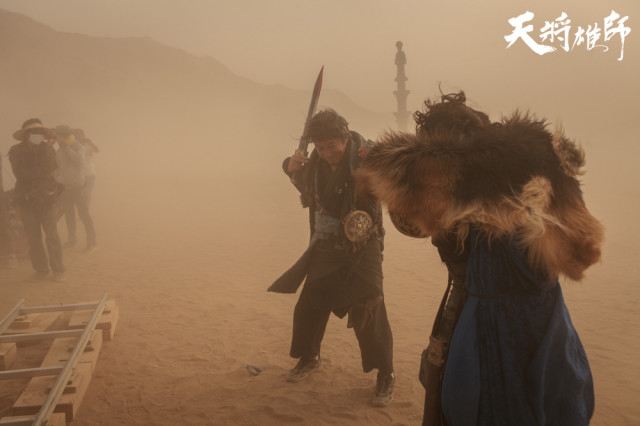 Having met so many sandstorms, the crew members deftly wrapped their heads with scarves. Jackie Chan was no exception; his head was completely covered up apart from the eyes. Together, they grabbed the tents, trying to secure them on the ground. Nevertheless, despite their effort, many of the tents were blown away. Thirty minutes had passed, but the storm showed no sign of weakening; the sand became so thick that one could not see further than two meters ahead. For everyone’s safety, Jackie Chan decided to call it a day. He shouted out loud, “Let’s wrap it up for today!” By that time, more than 700 crew members on the site had been turned into “sandmen”, covered with sand from head to toe; the sand got onto their clothes, into their shoes, and even sieved through their hair, dying it grey.

About the film:
Dragon Blade is filmed at a budget of ¥2 billion (US$65 million), a record breaking budget for a Chinese film. The film shoots in Dunhuang and the Gobi Desert, which form the dramatic natural backdrop. This will be the latest epic action blockbuster starring Jackie Chan, Adrien Brody, John Cusack and Choi Siwon.

The Story:
In 48BC, during the Han Dynasty, Roman general Lucius crosses into China after being accused of treason. In the Gobi Desert, he fights and then befriends Huo An, a former high-ranking commander, who himself has been framed by corrupt court officials and forced into slavery. The encounter sparks a thrilling piece of history that has never before been told.