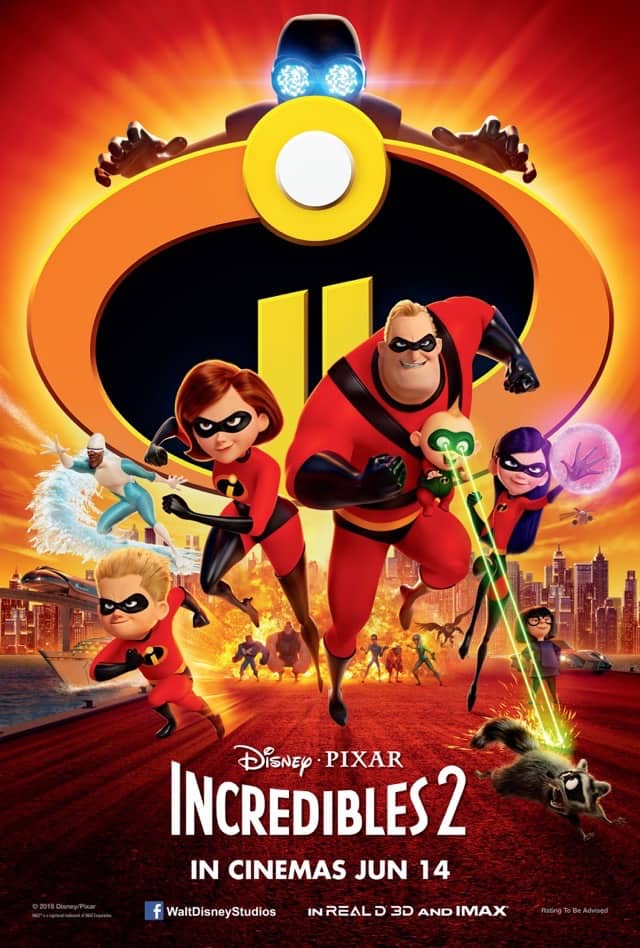 A sequel to The Incredibles has a lot to live up to. Pixar’s fresh, funny look at an ordinary family with extraordinary powers became an instant classic when it was released in 2004 – for very good reason. Writer-director Brad Bird struck a sublime balance between domestic drama and tongue-in-cheek satire – celebrating and sending up superheroes in equal measure. So, 14 years on, is Incredibles 2 worth the wait? Fortunately… yes. It doesn’t quite redefine or revitalise the genre, the way its predecessor did, but it’s still brilliantly funny, thoughtful and a pure joy to watch.

The film picks up exactly where The Incredibles left off – revealing that, as in often the case in real life, the happy ending was neither entirely ‘happy’ nor an ‘ending’. When we meet the superpowered Parrs again, they’re trying to figure out how to fight crime – not just as a team, but as a family. It’s more complicated and frustrating than any of them expects, especially when a botched mission yields catastrophic results… and a ban on superheroes.

This turn of events allows Bird to capitalise on the one element of Incredibles 2 that remains unique even in these superhero-obsessed times: the fact that the Parrs are a proper family, bound together by blood, love, duty and responsibility. That dynamic – anchored by the profoundly relatable tensions between husband and wife, parent and child, brother and sister – was what made the first film such a delight to begin with.

Incredibles 2 builds on this with even greater warmth, sensitivity and insight, touching on themes as expansive as feminism, empowerment and screen addiction along the way. When she’s called upon to front a pro-superhero publicity campaign, we watch Helen/Elastigirl (Holly Hunter) struggle with the demands of being a working mom. Left to take care of the children, Bob/Mr. Incredible (voiced by Craig T. Nelson) is forced to come to terms with his own roles and responsibilities as a father. And the kids are experiencing growing pains of their own: Violet (Sarah Vowell) freaks out over a forgotten first date; Dash (Huck Milner) does battle with his homework; and baby Jack-Jack tests out his burgeoning powers on an unfortunate nemesis.

Speaking of Jack-Jack – the youngest member of the Parr family steals the entire film – and will run away with your heart too. It’s no spoiler to say that he starts randomly unleashing one superpower after another: his abilities manifested in Pixar’s 2005 short film, Jack-Jack Attack, and are on full display in every trailer for Incredibles 2. But it’s impossible to adequately express just how delightful Jack-Jack is in this film – even as he shoots laser beams from his eyes, spontaneously combusts (“It means fire, Robert!”) and morphs into a rampaging mini-demon. His kinetic showdown with a hapless raccoon is one of the film’s best scenes: at once howlingly funny and gorgeously animated.

Jack-Jack is the easy standout, but similar care has been invested into exploring the potential and implications of his family’s powers. In particular, there’s a thrill of imaginative fluidity that runs throughout every one of Elastigirl’s scenes, given freer rein by 14 years of technological improvements. Her ability to stretch herself thin – a canny metaphor for the myriad demands of motherhood – allows her to slip through cracks, soar through the air and stop a runaway train in visually arresting ways.

In fact, it all looks so spectacular that you’ll find yourself gaining a renewed appreciation for the pure magic of animated movies. We’re living at a time when CGI and special effects can pull off just about anything on screen. And yet, Incredibles 2 proves with its every frame and action sequence that there are some ideas that just won’t work as well in live action. (That’s a lesson Disney might want to take to heart, by the way.) Edna Mode – genius fashion designer and undying fan favourite – proves it whenever she slices through a scene, radiating a cutting charisma as huge as she is tiny.

It’s fair to say, however, that not everything about Incredibles 2 feels quite as effortless as it did for its predecessor. This time around, Bird’s screenplay isn’t as light and nimble in its examination of superheroes and the people who help and hinder them. The characters of Winston (Bob Odenkirk) and Evelyn Deaver (Catherine Keener) are more grounded, for example, but also less interesting than the likes of supervillain Syndrome and super-sidekick Frozone (Samuel L. Jackson). The biting meta commentary of the first film is sorely missed. Some of the characters aren’t given much space to grow, either – Dash moves the fastest of them all, but feels like he doesn’t really go anywhere.

14 years on, you’d be perfectly justified to ask if there’s any point to Incredibles 2. After all, we now live in a cinematic era in which the superhero genre has established itself firmly in Hollywood. We’re intensely familiar with tales of ordinary people living and grappling with extraordinary powers. In the decade and a half(ish) that has passed since, Pixar has also released a bunch of sequels to films that didn’t require or deserve them (*cough*Cars*cough*). It’s enough to make you doubt if the Parrs have anything left to say – and if it would be said well. Thankfully, the wit and wonder of Incredibles 2 proves that good things do indeed come to those who wait – and that we’d be happy to wait for even more.

Summary: Brilliant in both execution and enjoyment, Incredibles 2 is worth the wait.