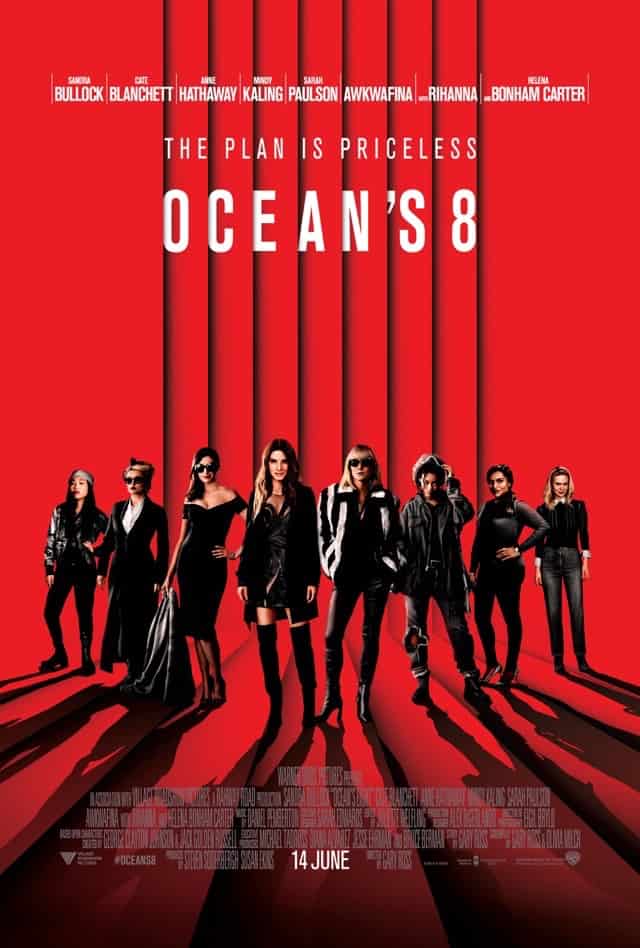 Strictly speaking, Ocean’s 8 isn’t a great movie. Its plot is more functional than fun, its execution more dutiful than dazzling. And yet, it’s still one of this summer’s purest cinematic pleasures – due almost entirely to the phenomenal cast assembled for the film. The eight leading ladies in Ocean’s 8 are having so much fun, both on screen and off, that it’s a delight just to kick back and watch them at work. They make the film better than it is and, by the time the credits start rolling, you’ll be hankering for a rewatch – or, better yet, a sequel worthy of the cast’s talents. 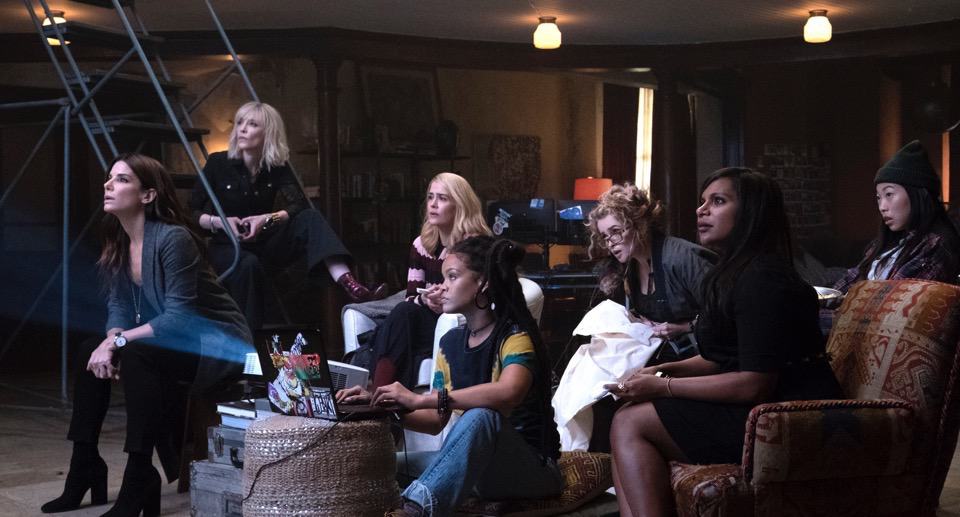 The main problem with Ocean’s 8 is that it doesn’t have quite the snap and sparkle that it should. A heist flick should sing and sizzle off the screen, but Ocean’s 8 rarely manages to do either. Steven Soderbergh – in peak auteur mode – threaded a heartbeat of fizzy joy throughout the original trilogy of Ocean’s films. None of those films, starring a host of Hollywood’s top leading men, would be considered classic cinema, but they were a blast to watch and puzzle out. In contrast, Ocean’s 8 lacks personality. The film is directed with workaday efficiency by Gary Ross, who seems concerned only with getting the plot from point A to point B.

It doesn’t help that the screenplay – co-written by Ross and Olivia Milch – is too busy explaining the heist to actually enjoy it. Each aspect of this criminal endeavour is painstakingly laid out, leaving any hints of mystery and magic by the wayside. Even the film’s plot twists barely register as surprises: one is mathematically guaranteed (the film is called Ocean’s 8 for a reason); the other ‘revelation’ arrives less in the key of sleight-of-hand, more in the form of sledgehammer.

But – and this is a huge but – the cast of Ocean’s 8 is so staggeringly good, their on-screen interaction so delicious, that the film becomes better by their very presence. This is particularly evident when it comes to the heist’s ringleaders. Bullock largely plays it straight as Debbie: all calm, collected and in control. But she nonetheless unearths a little sensitivity to Debbie’s swagger. Blanchett, meanwhile, is having the time of her life as Lou – revelling in and radiating a rock-and-roll confidence that can only partly be attributed to the array of fantastically tailored suits she wears.

They’re even better together. As Debbie and Lou reunite to pull off their biggest heist yet, Bullock and Blanchett give a whole new meaning to the term ‘partner in crime’. They could teach classes on the history and chemistry that they’ve created between their characters. Who – and what – are Debbie and Lou to each other? How did they meet, and what have they been through? There’s certainly more heat and flirty sexual tension (whether it’s resolved or unresolved is up for debate) between them than there is between Debbie and Claude (Richard Armitage), a man from her past that eventually gets tangled up in the present. 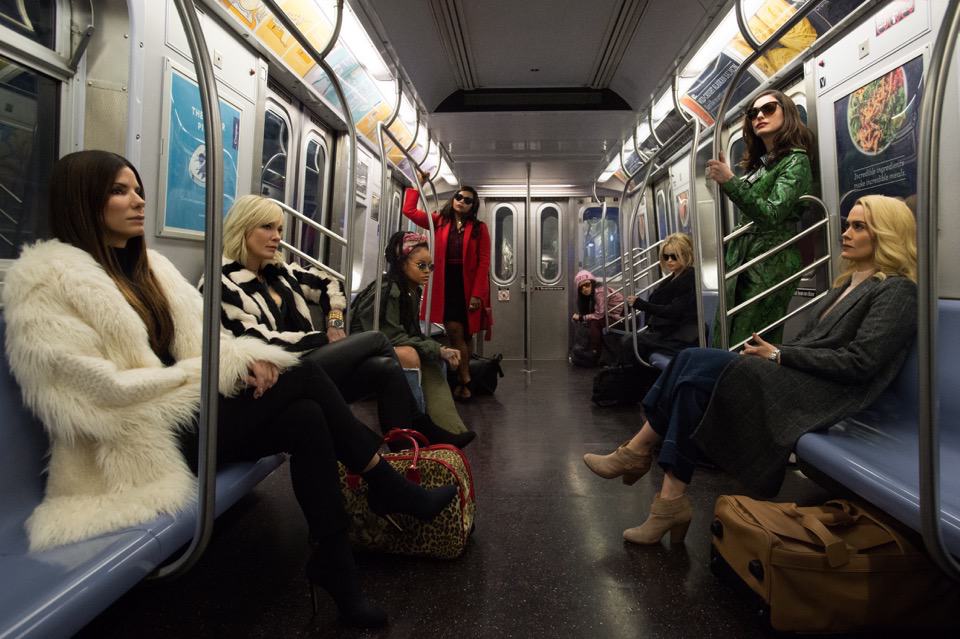 You’ll be left wanting more – more of these characters, more of their backstories, more of their lives and hopes and dreams and crimes. That’s true, too, of the other women in the film, who aren’t always afforded much depth in the script. Their personalities, for the most part, are interchangeable with the jobs they’re brought on to do. And yet, having these characters played by performers with such natural charisma and sharp wit as Bonham Carter, Kaling, Paulson, Awkwafina and Rihanna gives them a spark of life beyond what’s on the page.

Hathaway, in particular, waltzes away with practically every scene she’s in – a remarkable feat considering that she’s sharing the screen with a host of accomplished scene-stealers. She is dynamite as Daphne, playing the ego and irony, monster and sweetheart, of her role in a fireworks display of comic energy.

As for production design, it would be wrong not to heap praise upon the exquisite work of Sarah Edwards, Ocean’s 8’s costume designer. In this film – and for women in real life – fashion can be power: the clothes we wear tell the stories we want to tell, communicate the messages we want to convey. They empower as well as disguise, bestowing uniqueness and anonymity as necessary. Edwards understands this keenly, and has crafted a dizzying collection of gorgeous outfits that are full of rich character insight and detail – something that the script doesn’t always provide.

In the final analysis, it can be hard to separate Ocean’s 8 from what it represents. After all, this is a summer blockbuster with a primary cast made up entirely of women – half of whom are over the age of 40 (typically the ‘sell-by’ date in youth-obsessed Hollywood). Like this summer’s other female-led film, Book Club, it’s a phenomenon so rare and so significant that it’s worth celebrating.

What’s harder to celebrate is the unfortunate fact that Ocean’s 8 isn’t anywhere near as good as its cast deserves. That’s the true crime here. Imagine a version of this film shot with the flair and style of Soderbergh, or the tongue-in-cheek silliness of Taika Waititi. Imagine a screenplay that gives these incredible women depth and layers that they don’t have to invent for themselves. Imagine a plot that’s smart enough to take your breath away. And imagine all of that – for a sequel. Here’s hoping that this won’t be the last we see of Debbie Ocean and her crew.

Summary: This ridiculously fantastic cast deserves better, but they make the film worth the watch.