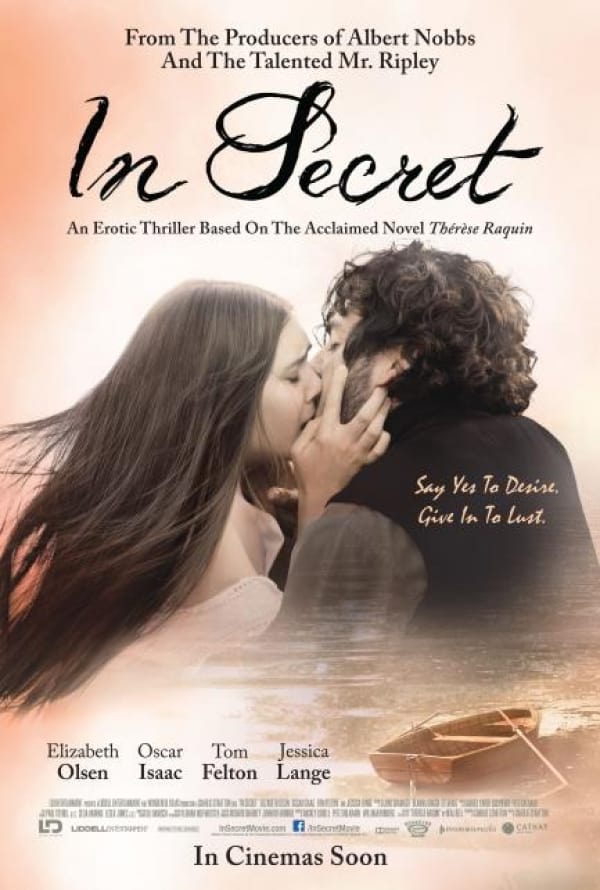 In Secret could easily have tipped over into abject melodrama – a tragic soap opera of love and lust, of sexual yearnings mixed with guilt and an all-consuming desire to be free and happy. The bare bones of the plot, based on Émile Zola’s classic 1867 French novel Thérèse Raquin, are indeed assembled in gaspingly lurid fashion, as they should be. Where the film succeeds is in its creation of an atmosphere so thick with gloom and misery that the story unfolds more realistically than it otherwise might. In Secret occasionally drags and stumbles its way through the dark, bitter twists of its narrative but, buoyed by a strong and committed cast, it’s also rich with big ideas and filled with foreboding.

At a tender age, Thérèse (Olsen) is brought to live with her overbearing aunt, Madame Raquin (Lange), and her sickly cousin Camille (Felton). Trained to fetch, carry and obey, Thérèse grows up as nursemaid, bed-mate and – finally – wife to Camille. Miserable and yearning to be free, she nevertheless dutifully follows her aunt and cousin to Paris, where she meets Camille’s childhood friend Laurent (Isaac). Before long, Thérèse and Laurent embark on a clandestine affair, so heated and desperately sexual that they convince themselves they must get rid of the one obstacle that keeps them apart: Camille.

As a human drama, In Secret works quite well. The sexual tension between Thérèse and Laurent is frequently electric, buried during their customary stolen lunch hour and kept out of sight of Madame Raquin. There’s a particularly powerful moment of decision for Thérèse: she hesitates before stepping onto a rowing boat with Laurent and Camille, well aware that doing so would consign her cousin/husband to a grisly demise. When Camille teases her, he seals her fate as well as his own. Thereafter, Thérèse and Laurent must suffer the consequences of their actions: a selfish bid for freedom that imprisons them all the more, curdling their lust and almost-love into a hateful, mutual loathing.

But In Secret is also grimly paced – its tale is so deeply overlaid with doom and gloom that it feels longer than it really is. It might be tempting to think of it as a comment on Thérèse’s tragic incarceration within her own family, where even a minute can feel like an hour, and a week like a year. The camera dwells so firmly and tragically on the dissolving household that some of the film’s bigger themes are hammered home with little subtlety. Madame Raquin, for instance, literally embroiders a dictum advising complete and utter silence into her needlework: a point that is blindingly relevant for Thérèse, of course, but also bludgeons itself with intense irony into Madame Raquin’s own fate later in the film.

The cast, at least, is strong enough to carry In Secret in its weaker moments. Olsen has consistently made interesting choices as an actress, and her fragile, spirited turn as Thérèse is no different. Isaac, so arresting in Inside Llewyn Davis, is initially bland but subsequently menacingly good, when Laurent’s darker,  meaner colours rise to the surface. Lange, meanwhile, chews the scenery with flair to spare, cooking up a character who’s equal parts mother and monster. Top honours go to the almost unrecognisable Felton, who disappears into the pasty, wilful skin of a character several light-years away from Draco Malfoy.

It’s hard to imagine that a story deemed scandalous when it was first published in 1867 can still be shocking today. Indeed, the sexual politics and stolen trysts of In Secret aren’t as titillating as they must have been almost 150 years ago. But the film, even with its problematic pacing and lack of subtlety, does go some way towards explaining why Zola’s story has endured to this day. Love and lust can drive people to do things for which they can never forgive themselves, and the film shines brightest when it heads into the murkiest of waters.