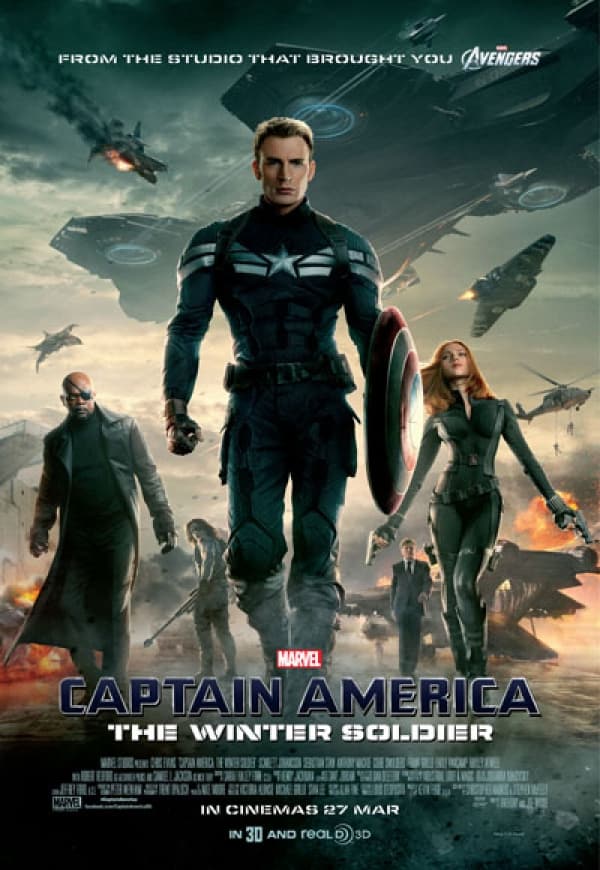 There’s no denying that Marvel Studios is – by most industry standards – almost ridiculously brave. Its president, Kevin Feige, has given the green light to any number of projects, decisions and personnel that would make most studio executives faint from horror. He resurrected Robert Downey Jr.’s career (it’s hard to remember, sometimes, that recovering alcoholic Downey was down and almost completely out when he became Iron Man), and trusted out-of-left-field directors like Jon Favreau, Joss Whedon and Kenneth Branagh to helm his studio’s riskiest and most expensive projects. And here comes Captain America: The Winter Soldier – one of the bravest decisions of them all, if not an entirely successful one.

After fending off the Chitauri invasion of New York, Steve Rogers (Chris Evans) again tries to settle down to life in a country – and century – he no longer knows. The young man with the old-school values starts working for Nick Fury (Samuel L. Jackson) in S.H.I.E.L.D., an agency meant to protect ordinary people from external threats, but finds himself asking a lot of worrying questions about the way things are being done. “You’re holding a gun to everyone on Earth,” he frets manfully at Fury, “and calling it protection.”

When it becomes clear that the methods and machines of S.H.I.E.L.D. have been badly compromised, Steve teams up with the two people he’s decided he can trust – results-oriented Natasha Romanoff (Scarlett Johansson) a.k.a. Black Widow and war vet Sam Wilson (Anthony Mackie) a.k.a. The Falcon – to get to the bottom of a nefarious conspiracy that threatens to destroy Earth as he has come to know it. Oh, and he’s also being chased by another genetically-engineered super-soldier: the titular Winter Soldier, who might possess a secret or two of his own.

There’s an enormous amount to love about Captain America: The Winter Soldier. It is, truthfully, the boldest entry in Marvel’s canon yet, and not simply because it dares to bring superheroes into the gritty, twisty world of spy thrillers. That, by the way, is a great touch, particularly in a really quite spectacular car chase through the streets of Washington D.C., one that culminates in a literally heart-stopping encounter in Steve’s shadow-lit apartment.

What the film really dares to do is shake up the mythos of the entire Marvel Cinematic Universe to date. Across several films now, Nick Fury has emerged as the sardonic but unquestionable defender of what’s good in the world. It’s somehow fitting that the most red-blue-and-white of superheroes should be the one who uncovers all the shades of grey. It’s a storyline that upsets the comfortable narrative of S.H.I.E.L.D. and its enforcers to date – including Cobie Smulders as Maria Hill, making a welcome return to the franchise – but also disrupts the way ahead (including, intriguingly enough, for Marvel’s companion television series, Agents Of S.H.I.E.L.D.).

Directors Anthony and Joe Russo – best known for their work on cult TV sitcom Community – demonstrate a great flair for character development. This is a talky and occasionally silly picture, its plot getting more outlandish as it unravels, but the Russos make up for the occasional deficits in logic with a lot of heart and depth. Steve’s attempts to battle his survivor guilt allow him to connect with both Natasha and Sam, and there are some quietly effective moments when it becomes evident how much Natasha has come to care for Fury. Steve also gets the chance to re-connect with a couple of familiar faces from his long-buried past, which allows him to come somewhat painfully to terms with his strange, new-found life.

The film fares less well in terms of its unwieldy script, which marshals its unlikely elements together quite effectively but is – at the end of the day – formulaic and a tough sell. The big conspiracy lying at the broken heart of S.H.I.E.L.D. manages to be both predictable and ridiculous. It’s a narrative twist that feels a few decades too old, like Captain Rogers himself: a relic of a certain type of Cold War thriller on which this film is clearly modelled (think All The President’s Men), rather than an idea that better captures the nebulous shifts of the world’s current political climate.

Captain America: The Winter Soldier also frequently begs the question – more so than Iron Man 3 and Thor: The Dark World did – ‘Where the heck are the rest of the Avengers?’ It beggars belief that only Steve and Natasha are reacting to the events of this film, which are catastrophic and earth-shaking enough to suggest that their old team-mates should really have popped in at some point. Surely Tony Stark would have something to say about the use of his doomsday technology in any scenario, much less this one!

The cast goes a long way towards making up for the hokier parts of the script. On paper, Steve is a rather one-note good guy, fighting for old-fashioned ideals in an unrecognisably debauched world. But Evans gives him heart and creates a huge amount of sympathy for the shield-wielding Captain America, particularly in a surprisingly emotional last-act confrontation with the Winter Soldier. This film also gives both Johansson and Jackson more to do than in any other Marvel movie to date, and they’re both so electrifying that you’ll continue to wonder why they haven’t yet received their own flagship movies.

The decision to cast Robert Redford – still hopelessly debonair at 77 years of age – as Alexander Pierce, Fury’s commanding officer and confidant, is a canny one. It’s a nice callback to the 1970s thrillers that made Redford’s name and no doubt inspired the grit and feel of Captain America: The Winter Soldier. Redford delights in the role, and helps make it appear more complex than it really is.

When it comes down to it, Captain America: The Winter Soldier can leave a little something to be desired when taken on its own merits. Frequently, its grand ambitions outstrip the logic and power of its script. As an extension of what has become the world’s biggest franchise of blockbuster films, however, it’s an unmitigated success. It’s brainy, dark, and boldly rips apart the entire underlying narrative of the Marvel Cinematic Universe. In that sense, at least, there’s no doubt that this is one of the finest blockbusters you’ll see this year.

Summary: A fine, bold entry in the Marvel canon, if not an entirely successful one.