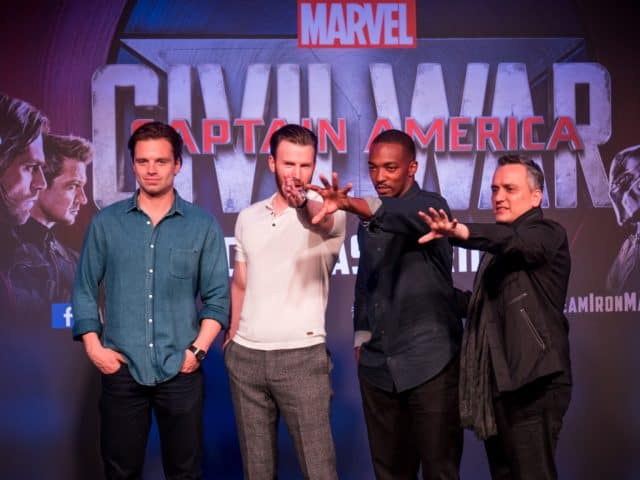 It seems our tiny city state has been in a bit of a tizzy, ever since Marvel announced that Singapore would be one of the stops on the promotional tour for Captain America: Civil War, the 13th entry in the Marvel Cinematic Universe (MCU). A brouhaha erupted over the obscenely high ticket prices that were being charged for premium access to the blue carpet – the passes, priced at $688 and $1288, did not even guarantee actually meeting the celebrities, and a discussion on the exploitation of geek interests for profit spread across social media. It was later clarified that these were package deals, and fans were welcome to line the blue carpet in the hopes of a selfie or autograph for free. 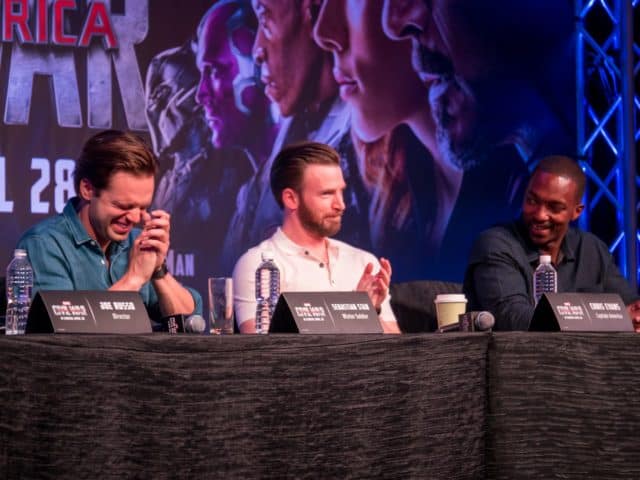 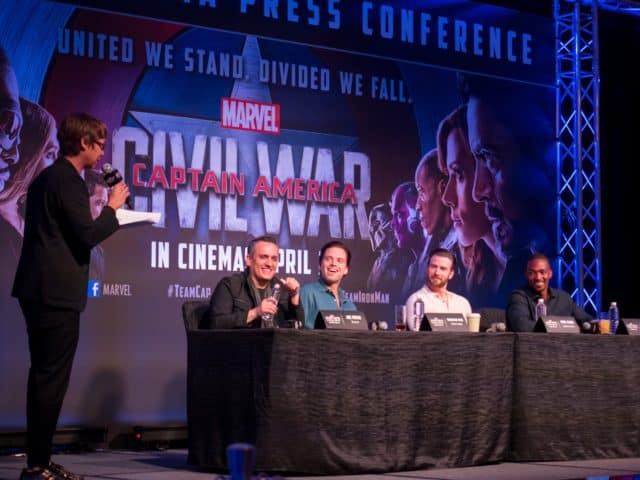 Civil War sees the Avengers fractured after politicians around the world propose a governing body to keep superhero activity in check, so as to prevent the wanton collateral damage the Avengers have incurred in the past from happening again. Half the team sides with Iron Man, who is for regulation, while the other backs Captain America, who is against it. Stars Robert Downey Jr. (Tony Stark/Iron Man), Don Cheadle (James Rhodes/War Machine) and Emily VanCamp (Sharon Carter/Agent 13), with co-director Anthony Russo, threw down the gauntlet by lighting up the Eiffel Tower in red and gold with blue ‘eyes’ during their press tour in Paris. Presumably, VanCamp was brought in as a replacement for Scarlett Johansson, seeing as Agent 13 really is on Team Cap in the movie. 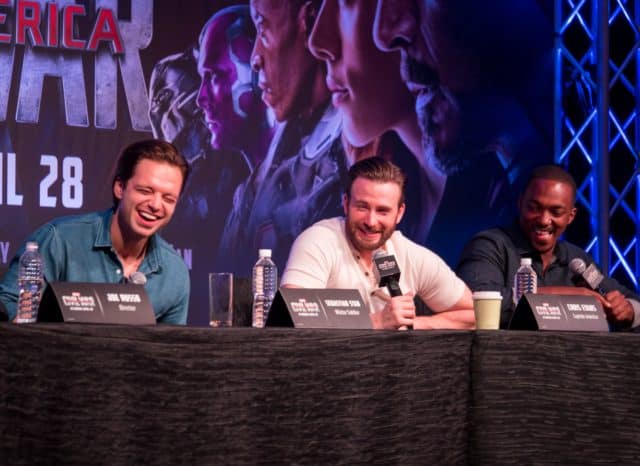 “I saw what Downey did in Paris, and it was great, but I think we can really do something special here in Singapore and show ‘em it’s all about Team Cap,” Evans declared. He was referring to the plan to light up the three towers of the Marina Bay Sands Integrated Resort in red white and blue; the light-up will be accompanied by a fireworks display. “The more buzz, the more energy that can be created, the conflict between the two camps is going to help the film,” Evans said, tacitly conceding that the rivalry is obviously manufactured to keep the sales machine going.

The Russo brothers return to the MCU after helming the much-loved Winter Soldier movie. They are also signed on for both parts of the upcoming Infinity War cinematic epic, which will see the Avengers finally come face-to-face with their ultimate foe, the intergalactic warlord Thanos. Russo cited the interplay between the characters as a key component in the MCU, saying “I think this movie has more character interaction than any movie that has preceded it in the Marvel Cinematic Universe.” Civil War is couched as a culmination of plot lines that have been fomenting across the earlier Avengers and Captain America movies, with Russo promising a film that’s “Heart-breaking but also a great deal of fun and “a well-rounded experience at the movies.” 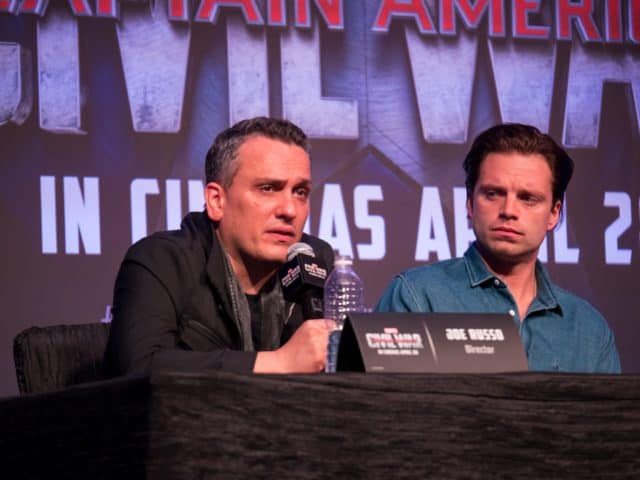 “It’s a Steven Soderbergh-level of cast,” Russo said of the ensemble he and his brother presided over. “Marvel has done an amazing job of filling out the Marvel Cinematic Universe with some of the best actors in the world, it makes my job very easy.”

“They have a wonderful understanding of cinema,” Evans said, returning the praise. “A lot of directors don’t always want to reference other movies, but Joe and Anthony are true cinephiles.” 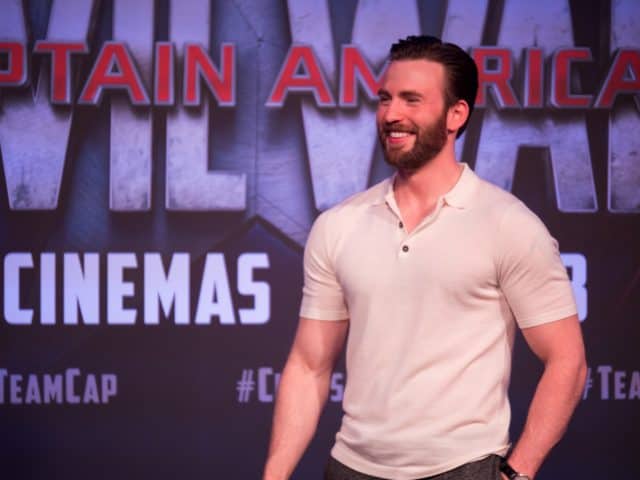 The Russo Brothers are known for their work on television comedies like Arrested Development and Community. They slipped Community cast member Danny Pudi into The Winter Soldier, and Jim Rash has a cameo in Civil War. Russo drew a parallel between shooting comedy and staging action sequences, saying “When you execute a comedic gag, there’s a lot of correlation to action: spatial relationships on screen, editing, rhythm.” Russo acknowledged the “incredible support” rendered to them by the Marvel Studios brass, calling the visual effects team “unbelievable”.

In order to decide who would be on whose side, the Russo Brothers sat in a room for months with writers Christopher Markus and Stephen McFeely to hash out the story beats. We went through the cast we had available us and the cast we didn’t have available to us and we thought very hard about who would line up against who based on their motivations up to this point in the Marvel Cinematic Universe.” Russo added that “surprises for the audience” were on the agenda too. 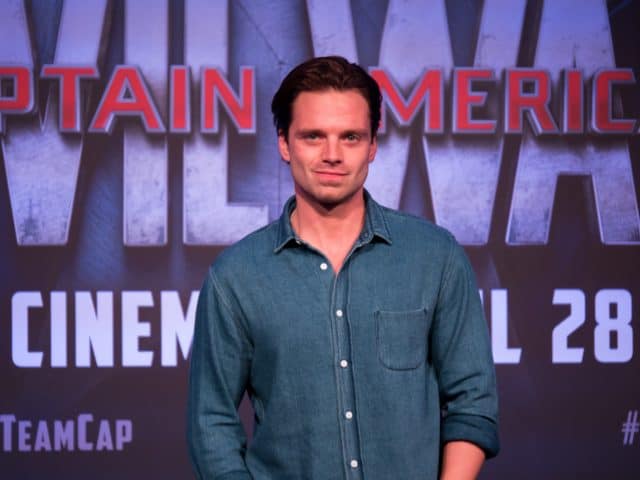 Throughout the press conference, Stan seemed the most withdrawn while Mackie was gregarious and game. Perhaps Stan was freshly defrosted from Winter Soldier hibernation. Mackie was handy with the disses aimed at Team Iron Man, like so many bullets from flip-out submachine guns. “We try to get to know the culture that we’re in, eat the food and meet the people,” Mackie said, tacking the colloquial Singaporean interjection ‘lah’ onto the end of a few sentences. “Whereas Team Iron Man, they’re more about just going from the press conference to the spa, and then from the spa to their jet, stuff like that. We hitchhike. They hang on to me, I put on the jetpack and we go straight across.” 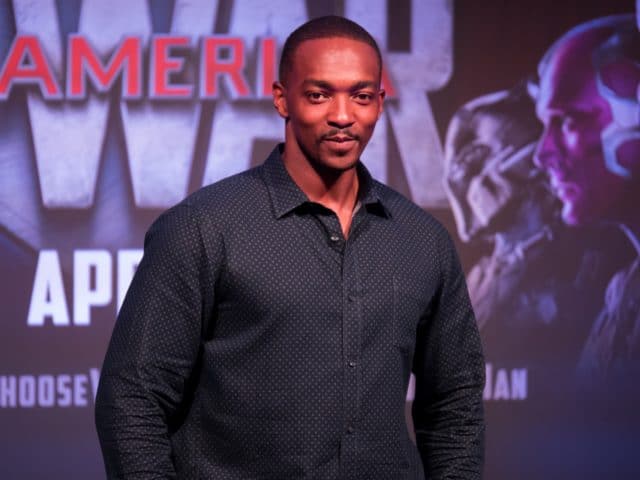 In the film, Falcon’s get-up is referred to at one point as a “bird costume.” Mackie reacted with mock indignation when a reporter reminded him of this, replying “say that one more time, homie? I’m described as what?!” When egged on to denigrate Team Iron Man’s outfits, Mackie offered that Stark himself looks like “a coke can”, that Vision looks like “someone just drew over him”, that War Machine resembles “a trash can” and that Black Panther’s suit seems like it’s made of “Michelin car tyres.” He could not bring himself to insult Black Widow, whom he described as “perfect.” 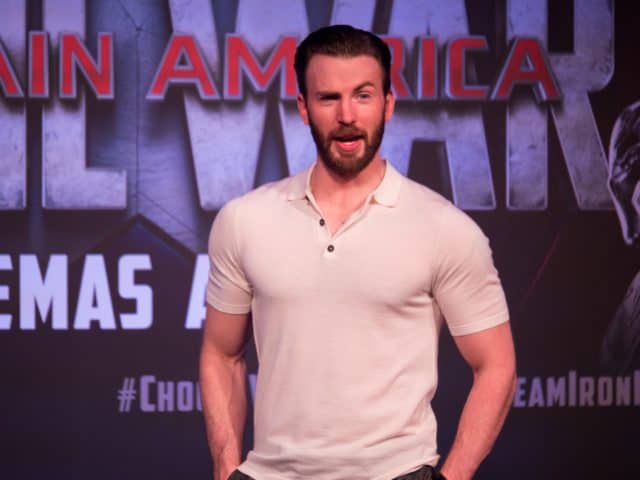 When quizzed on how they get in superhero shape for the films, Evans said there was no magic bullet, “Any type of secret workout, diet, doesn’t really work,” he insisted. “We go to the gym, we pick up heavy stuff, we put that down, we do that until we can’t do that anymore and we get big.” Sounds so easy when he puts it that way, doesn’t it? Mackie jests that Evans really is an Ultimate Frisbee enthusiast. Evans admonishes him, saying that his quip is bound to get lost in translation down the line and invariably get taken seriously by somebody.

The film pushes the relationship between Rogers and Sharon Carter/Agent 13 further along, with Rogers learning that she’s actually the niece of Peggy Carter, the co-founder of S.H.I.E.L.D. who fell in love with Rogers during his WWII days. Evans stated that it “follows in the lineage of what Cap considers his home to be with Peggy Carter, and Sharon Carter is kind of an incarnation of something familiar.” He said he is intrigued by the suggestion of a romantic bond between Cap and Black Widow, which Mackie objected to, since he has his eye on Black Widow. “They come from different backgrounds and find comfort in each other at different times of distress,” Evans reasoned. “I always thought that would be a really interesting dynamic to pursue, but at the same time, it’s very sweet and very pure that they’ve kept it platonic.” 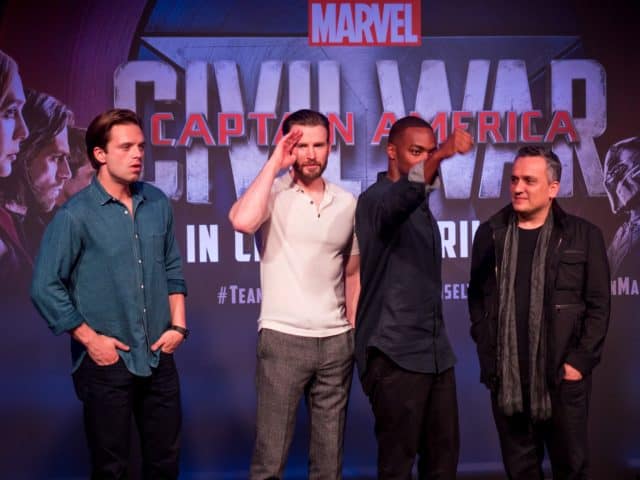 Russo delivered the closing salvo of the press conference, calling Civil War an “incredibly important” entry in the canon. “Winter Soldier changed the external structure of the Marvel Cinematic Universe with the dissolution of S.H.I.E.L.D. I think that this movie changes the psychology of the Marvel Universe in a very significant way,” Russo continued. Teasing what’s to come, he said that “the ramifications of Civil War are not over, they’re going to carry over significantly into Infinity War.” So, from the ashes of war, there is rebuilding to be done.

F***’s coverage of the Team Cap festivities in Singapore will continue.