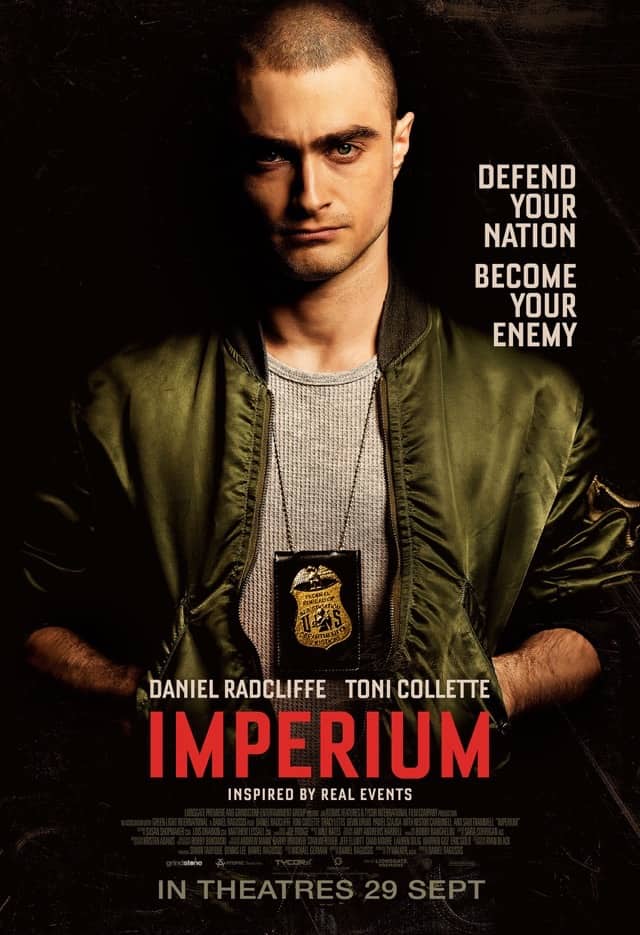 Daniel Radcliffe solemnly swears he is up to no good, and that’s putting it very mildly. In this thriller, Radcliffe plays Nate Foster, a promising FBI analyst. His superior agent Angela Zamparo (Collette) gives Nate the assignment of infiltrating a Neo-Nazi white supremacist group, in order to foil an impending terror attack. Agent-in-charge Tom Hernandez (Carbonell) thinks that Nate and Zamparo are barking up the wrong tree, but Nate is determined to prove him wrong. Nate fully immerses himself in the role of a skinhead, with the intention of getting close to radio host Dallas Wolf (Letts), whom Nate believes is plotting something big. While he is initially accepted by Vince (Szajda) and his gang, Nate finds himself drawn to Gerry (Trammell), who appears to be a mild-mannered engineer and family man, worlds away from your typical white supremacist thug. At every turn, Nate is in danger of having his cover blown, as he starts to wonder if the risky endeavour was worth it.

Imperium claims to be inspired by real events – it isn’t based on a specific case, but former FBI agent Michael German, who receives a story credit, did have similar experiences on the job. Writer-director Daniel Ragussis makes his feature debut with this gripping film. Imperium invites audiences to not just stare evil in the face, but to dig beneath its skin and see what makes it tick. The scenarios presented are chillingly plausible, and we gain insight into the different facets of the white supremacist movement. The motivations and rationale of these people are established clearly enough. Some of these scenes are heavy on the exposition, but the film stops short of unspooling a manifesto and making the audience read through it line by line. All of the obstacles one imagines Nate might run up against when going undercover do present themselves, but the momentum of the story means it’s easy to overlook some fairly standard procedural plot developments.

There are a few lines in the screenplay that are unintentionally funny – “we can’t control the ketchup, but we can control the streets” comes to mind (no, we’re not giving any context for that). However, most of the writing is engagingly clever and it’s evident that Ragussis has given the premise a good amount of consideration. Nate thinks his way out of some truly daunting binds and we are presented with characters who are very satisfyingly developed. It might be tempting to portray militant racists as one-note monsters or bumbling buffoons, but that would end up quite boring. It’s scarier when we see them as actual people. We learn that there isn’t just one type of white supremacist and that there are rivalries of ideology even within that community. Imperium details why some would be drawn to the cause, while also acknowledging its danger.

That’s not to say that Imperium is a work of unparalleled nuance: Ragussis falls back on familiar shock tactics, including sweet-looking children spouting hateful rhetoric. Flashing images of marching hate groups fill the screen, which comes quite close to hitting the audience over the head.

Many child actors dive headlong into eyebrow-raising ‘adult’ roles in an effort to shake off any potential type-casting. One could dismiss Radcliffe as doing just that, but his varied post-Harry Potter career on the stage and screen shows that he is putting in the work to cement himself as a serious actor. He gives an Oscar-worthy performance here, creating a fully-rounded character whose harrowing journey is easy to go along with. Nate starts out looking like John Oliver Jr., and then goes full skinhead. Not the most drastic physical transformation, but striking all the same. This is an intelligent character who is able to apply what he’s studied to practical use and who does his homework – there’s a montage of Nate diligently poring over Mein Kampf, Essays of a Klansmen and books of their ilk. He doesn’t look like he’s cut out for undercover work, but goes on to prove that he has a real knack for it. It’s a generalisation but English actors seem to struggle with American accents – we’ll be darned if Radcliffe doesn’t sound really natural here.

Collette’s Zamparo is the authoritative maternal figure and she seems to play the role a little too broadly. However, the interactions between Zamparo and Nate do reveal just enough about their respective characters, with a big part of Nate’s motivation being his eagerness to impress his superior. Letts avoids turning his radio host character into a blustery blowhard, and the character is all the more insidious for it. Trammell’s charming turn is disarming – Gerry is the friendly neighbour who builds a treehouse for his kids and throws barbeque parties; his wife makes cupcakes – albeit cupcakes that are decorated with Swastika frosting. The way Gerry views Nate as a potential successor in the movement and the hospitality he shows to Nate provide nail-biting tension cloaked in suburban normalcy.

Imperium succeeds as a blistering thriller and a searing voyage down some foreboding paths. It may not be terribly complex, but there is a palpable effort to ask difficult questions and it will give your skin a workout from all that crawling it’ll be doing. A likeable protagonist trying to keep a grip on his sanity as he plunges into the lion’s den ties it all together.

Summary: Placing the audience on the razor’s edge alongside its protagonist, Imperium is an affecting and deeply engrossing thriller boasting a captivating lead performance by Daniel Radcliffe.