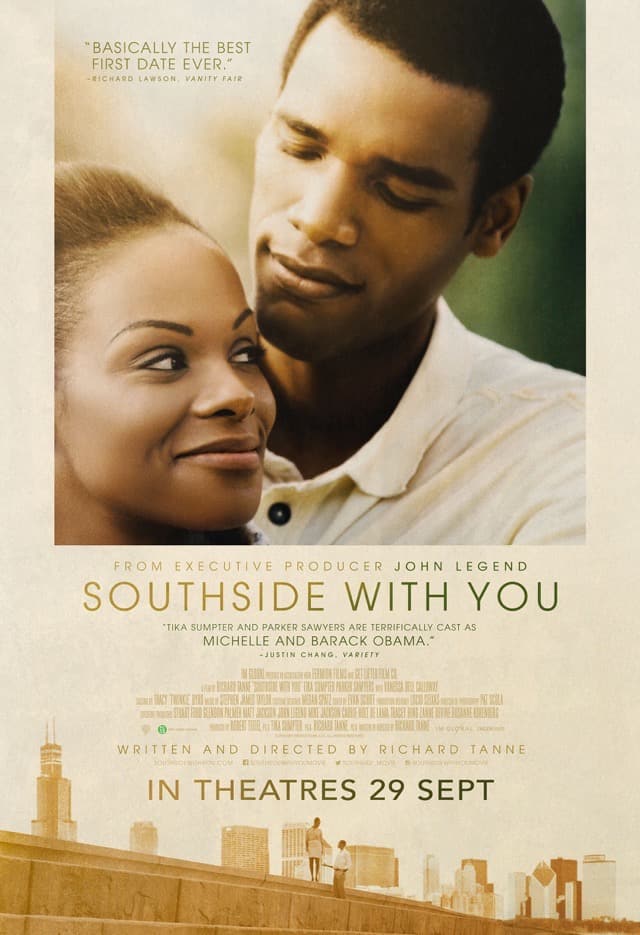 Having one’s first date be dramatised and put up on the big screen for all to see must be a daunting, slightly unnerving notion. Public figures with as high a profile as the President and First Lady of the United States are probably fair game for this treatment, though. Southside With You depicts the summer’s day in 1989, when young law associate Barack Obama (Sawyers) and Michelle Robinson (Sumpter), the lawyer assigned to mentor him, go on their first date. They visit an Afro-centric art exhibit and admire the paintings of Ernie Barnes, eat sandwiches in the park, go to a community organisation meeting, watch Spike Lee’s movie Do the Right Thing and finally have ice-cream. Michelle starts out adamantly refusing Barack’s advances, but as the day goes on, the two learn more about each other and Michelle begins to think that maybe getting into a relationship with the guy is not so bad after all.

For the sake of easy reading, we’re going to refer to the President and First Lady of the United States by their first names. We mean no disrespect and, after all, this story takes place before they took on those positions.

On hearing of the premise for this film, a number of doubts began to form. What if it’s heavy-handed? What if it’s painfully cheesy? What if it comes off as propaganda? Southside With You has the easygoing, pleasant vibe of your typical indie romance, but because of its protagonists, the stakes are raised considerably. It’s an inspired premise, though one would need considerable finesse to pull it off – finesse that writer-director Richard Tanne mostly possesses. This is Tanne’s feature-film debut and what a calling card it is. The Obamas have briefly discussed their first date in various interviews and Tanne extrapolated that into the conversations they might have had at and between the events they went to that day. Some of the dialogue is not terribly subtle but we end up learning a fair bit about what makes Barack and Michelle the people they are. When the soon-to-be-couple have arguments, the conflict arises and is resolved organically.

Another worry this reviewer had was that this would fall into the ‘prequel trap’ of laying down obvious hints to the characters’ future that the audience would already be cognisant of. Tanne displays admirable restraint and his reach does not exceed his grasp. Far from a sweeping cradle-to-the-grave biopic, this is modest in scope, the events unfolding over a single day, and all the better for it. Southside With You does succumb to several rom-com clichés, chief of which being Michelle’s repeated insistence that “this is not a date!” Barack’s repeated attempts to woo Michelle, who initially is having none of it, are eminently relatable. The greatest triumph is that Barack and Michelle end up feeling like real, multi-faceted people.

Stephen James Taylor’s world-music-tinged score is refreshingly different from the standard romantic swelling strings we’ve become accustomed to. An original instrument called the ‘transcendello’, a cross between a pedal steel guitar and a cello invented by David Rivinus, gives the music a unique textural quality.

Casting is obviously crucial, given how familiar the general public is with the way Barack and Michelle Obama look and sound. Sumpter is given top billing and co-produces in addition to starring. While we spend most of the film with both Barack and Michelle, we open on Michelle at her parents’ house, getting ready for her day out. Sumpter can be a little stiff at times but she has Michelle’s distinctive vocal cadence down pat. Her fiery assertiveness is magnetic, and the back-and-forth between the pair is almost thrilling. She spends most of the film sizing Barack up, while he’s already smitten, and there is an ‘aww shucks’ quality to how Michelle’s attitude towards Barack evolves as the day progresses (spoiler: they end up together).

Sawyers is magnificent, proving himself to be bona fide A-list leading man material. According to Tanne, Sawyers’ initial audition was an over-the-top impression of Barack Obama, but once he was directed to tone it down, it became clear that he was the ideal choice for the role. The charisma, winsome charm and affability that are key components of Barack’s personality all shine through in Sawyers’ portrayal. A scene in which Barack addresses a community organisation and rouses the crowd with a phrase that’s a proto-“Yes we can” is acted with irresistible confidence. Barack discusses his upbringing and expresses bitterness at his late father, and while this is largely a hagiography, there’s a great deal of humanity in Sawyers’ portrayal.

“I just want to do more,” Michelle sighs as she shares a beer with Barack.

“Maybe wanting is enough for right now,” Barack replies. This disarming honesty is Southside With You’s greatest strength. In addressing politics and race relations, Tanne never uses the Obamas as delivery vehicles for ideologies and always brings things back to how they’re affected as people. Southside With You manages to be quietly moving and genuinely romantic, not overly-engineered, faux-Nicholas Sparks romantic. As Barack Obama’s presidency draws to a close, this is as wistfully affectionate a farewell as they come.

Summary: While it’s tender, insightful, gently funny and finely acted, Southside With You won’t win over the vehemently anti-Obama set, but it isn’t intended for that demographic anyway.