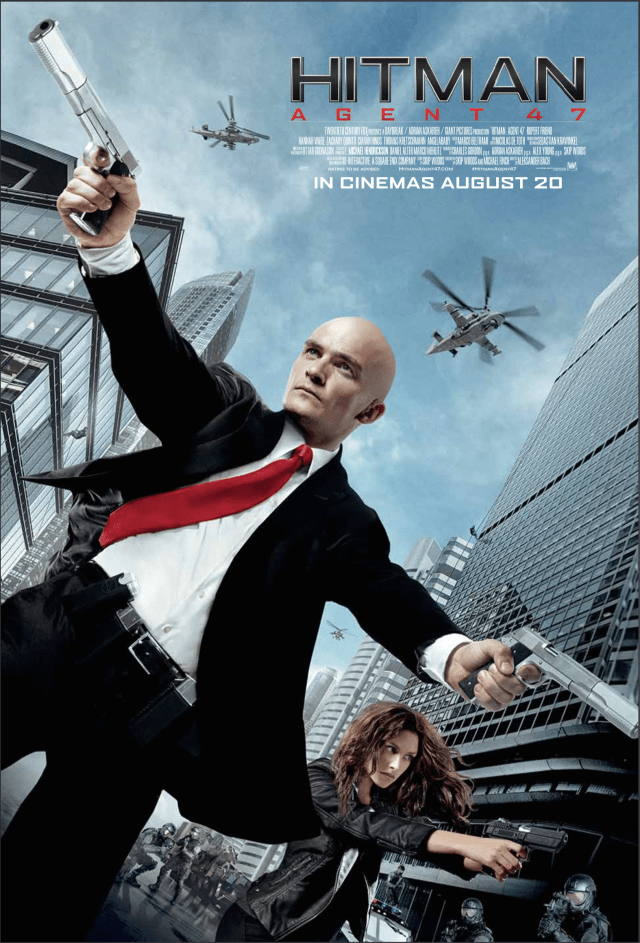 Agent 47, the perfect assassin, failed to make a killing at the box office with his 2007 cinematic outing and is back for a second go-round in this reboot. Agent 47 (Friend) is the result of a top-secret genetic engineering program spearheaded by Dr. Litvenko (Hinds). Horrified at what he had created, Dr. Litvenko vanished and went into hiding, deserting his daughter Katia (Ware), who has spent the better part of her life searching for her father. In Berlin, it appears that Agent 47 is out to kill Katia, and a mysterious man known as “John Smith” (Quinto) arrives to protect her. However, all is not as it seems, and everything converges in Singapore, where the sinister corporation Syndicate International has its headquarters. Syndicate’s chairman Le Clerq (Kretschmann) is determined to restart the Agent program and create more killing machines for his own nefarious ends, and it is up to 47 and Katia to stop him from doing so. 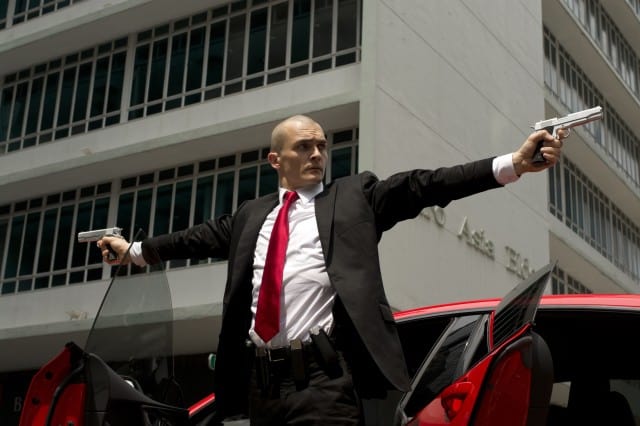 Fans of I/O Interactive’s Hitman video game franchise were understandably wary when it was announced that there would be a film reboot. The 2007 movie starring Timothy Olyphant was cheap, dull, incoherent and lacking in thrills, but Olyphant was convincingly tough and looked the part. Paul Walker was initially cast as 47 and was replaced by Rupert Friend after Walker’s untimely death. All the warning signs were there: first-time feature director Aleksander Bach, who has worked mainly in music videos, is at the helm and Skip Woods, who wrote the first film in addition to X-Men Origins: Wolverine and A Good Day to Die Hard, has a screenwriting credit. While the video game series is very much stealth-based, there is precious little sneaking around and a lot of shootouts in public places in this film. 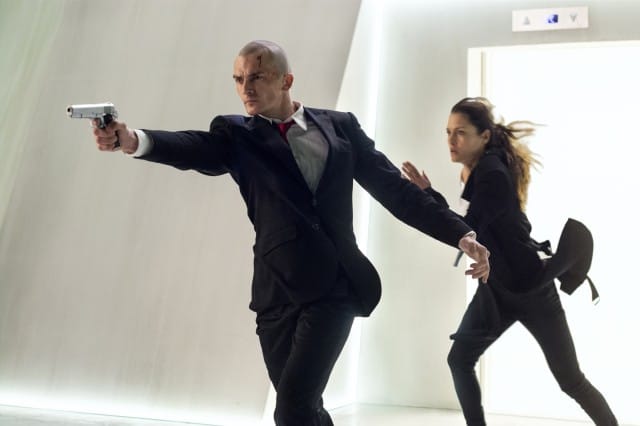 The movie is primarily set in two locales, Berlin and Singapore. This is the first major Hollywood production to shoot in the Southeast Asian nation and as is expected, it looks like a tourism commercial, with plenty of sweeping establishing shots of the city’s skyline, with the CGI Syndicate International building plonked into it. There is a novelty factor to seeing Singapore featured so prominently and hopefully this paves the way for more Hollywood films to shoot here, but it’s amply clear that an exotic location does little good if there isn’t a substantial story to back it up. Singapore is widely regarded as a pretty safe place to live and has one of the toughest gun control laws in the world. There are guns all over the place in Hitman: Agent 47’s version of Singapore, with 47 himself getting his arsenal into the country without a hitch. The filmmakers hope that audiences will suspend their disbelief instead of laughing at how ridiculous these scenarios are. Also, one of 47’s enhancements is apparently tolerance to warm weather, since he barely breaks a sweat while clad in those suits in the middle of the equatorial heat. 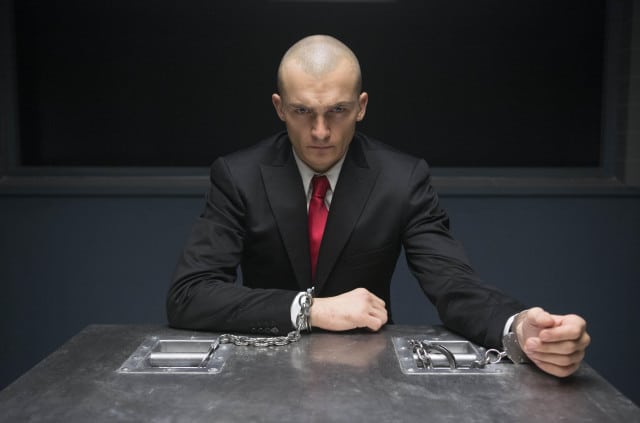 Rupert Friend has endeared himself to many viewers as Peter Quinn, the special operative with a heart of gold, on TV’s Homeland. He is a good actor, but it is extremely difficult to buy him as an emotionless, stoic, single-minded assassin. In an effort to sound tough, he sometimes speaks in a silly hoarse whisper-mumble and struggles at coming across as intimidating or imposing. He isn’t phoning it in and he is competent at performing the fight choreography, but with a character whose appearance is as iconic and as striking as Agent 47’s, looks matter more than with other adaptations. Zachary Quinto knows he’s in a silly action movie and hams it up as the snarling villain – it’s intended to be ambiguous as to whose side he’s on, but it’s pretty obvious that he’s the bad guy, the moral landscape of this film nowhere near as grey as the producers imagine it to be. 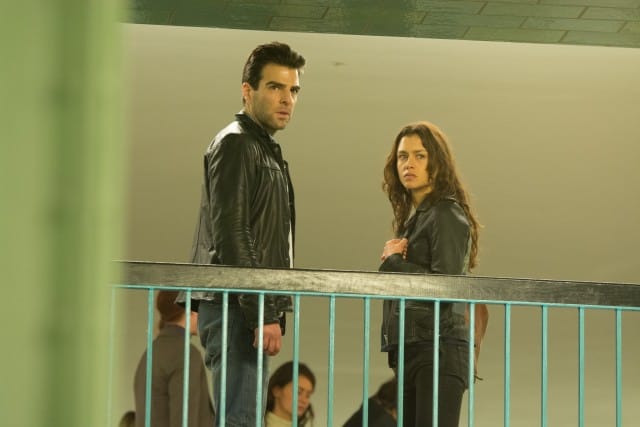 Hannah Ware’s Katia isn’t a particularly interesting character and Ware isn’t a particularly interesting actress, coming across as a generic English brunette. The character begins as somewhat of a damsel in distress but gets to do her share of ass-kicking later on in the film. Ware is never believable for a second in these scenes – far be it from us to criticise an actor’s physique, but she often looks like she’s in danger of snapping clean in half. Ciarán Hinds is probably happy to cash his paycheque and Thomas Kretschmann, no stranger to playing villains, does very little besides sitting behind a desk in a shiny high-rise office and barking orders to his minions. Hong Kong singer/actress Angela Yeung, better known as “Angelababy”, has what amounts to a cameo as 47’s boss Diana. 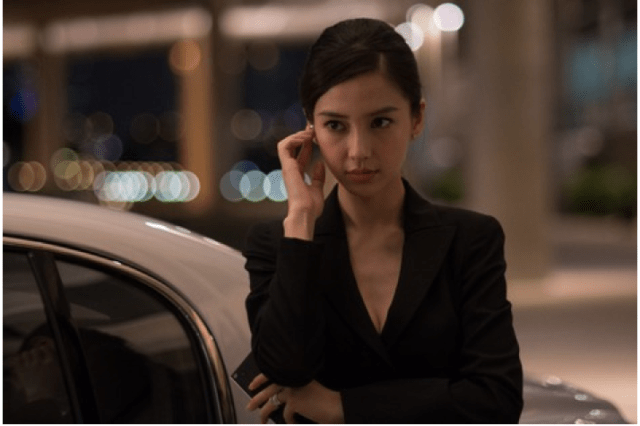 The action sequences can be fun, if one overlooks the overuse of shaky-cam. It’s a shame that the camera never stays on the fights, because the action choreography is handled by Chad Stahelski and David Leitch, directors of last year’s John Wick. It makes one wonder how much better this would have turned out under their control, even with the same sub-par script. The movie isn’t boring, moving along at a decent clip with an adequate collection of fisticuffs, shootouts and chases. Hitman: Agent 47 also benefits from its NC-16 (R in the U.S.) rating, meaning that it doesn’t have to pull its punches and can showcase a number of appropriately brutal kills. This is a movie about a hitman, after all. It’s too bad that a lot of the computer-generated imagery is unintentionally hilarious – any time a CGI stuntman went flying through the air, it took this reviewer out of the movie completely. 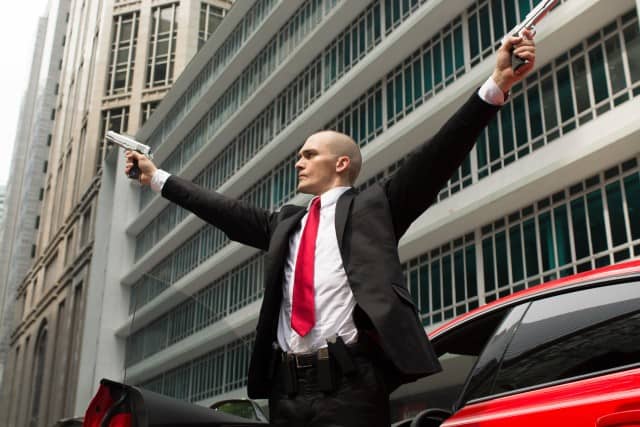 If you’re a particularly undemanding action movie fan, Hitman: Agent 47 is certainly not the worst way to kill 97 minutes ever. It might be possible to overlook the thoroughly generic plot and enjoy the action and the locales, but this possesses a higher “leave your brain at the door” quotient than most “leave your brain at your door” movies. What is most entertaining is the thought that some Singaporean government official will have to pretend this is a good movie to justify its use of the country as a filming location.

Summary: Cheesy and generic but bloody and fast-paced, Hitman: Agent 47 is reasonably fun to laugh at and is somewhat entertaining if one can embrace the dumbness wholeheartedly.