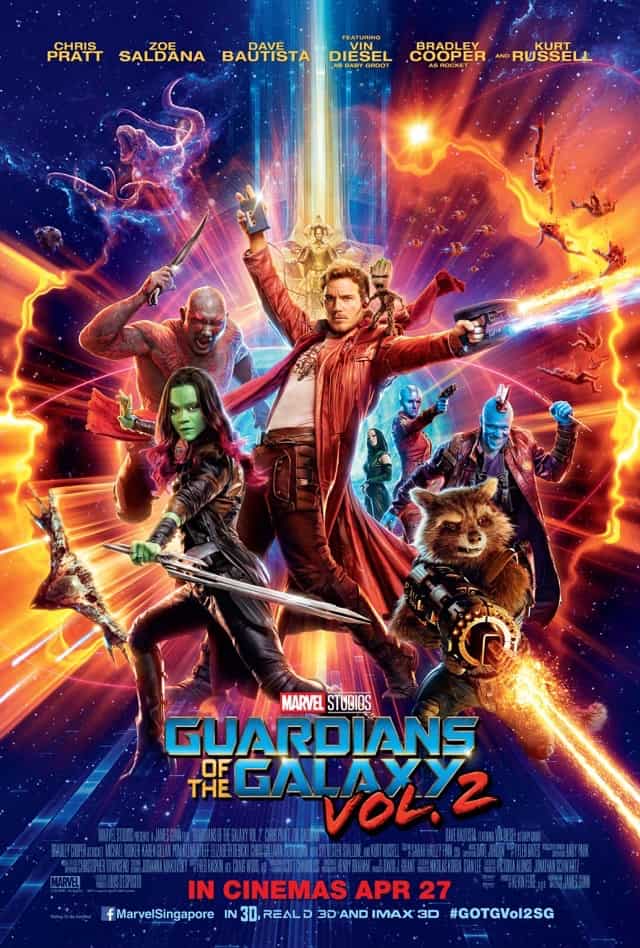 Pop the tape in the deck and pump up the volume, ‘cos Star-Lord/Peter Quill (Pratt) and company have returned. Our loveable gang of a-holes crosses the cosmos in an adventure that brings Quill face-to-face with his biological father, Ego (Russell) the Living Planet. That’s not the only family reunion taking place: assassin Gamora (Saldana) and Nebula (Gillan), the daughters of Thanos who have long been at each other’s throats, cross swords again. Jolly big guy Drax (Bautista), cantankerous cybernetically-enhanced raccoon Rocket (Cooper) and wee sapling Baby Groot (Diesel) are along for the ride. The team makes a new ally in the form of Mantis (Klementieff), an alien empath raised by Ego. They also make a new enemy: the haughty High Priestess Ayesha (Debicki) of the Sovereigns, who has put a bounty on the Guardians’ heads. In the meantime, Yondu (Rooker) is in danger of being displaced, as Taserface (Sullivan) leads a coup against him within their gang of Ravagers. The fate of the galaxy once against rests on the wildly different-sized shoulders of our ragtag heroes.

Before Guardians of the Galaxy’s release in 2014, several industry watchers were predicting it could be the first high-profile misfire for the Marvel Cinematic Universe (MCU). Following its rollicking critical and commercial success, director James Gunn was feted as having accomplished the nigh-impossible. Now that the first Guardians film has become a juggernaut and Chris Pratt is an established movie star, that dark horse sheen has worn off. We can imagine Gunn having a mini “now what?” crisis as he was prepping the sequel. He certainly had his work cut out for him, and Vol. 2 retains much of the wacky charm that made the first film as distinctive and enjoyable as it did, while further exploring what makes this colourful cast of characters tick.

Gunn stated in a Facebook post that he dislikes sequels bringing characters back to square one. In Vol. 2, we see arcs progress, and everybody gets their moment in the sun. It’s a precarious balancing act, and at times the push/pull between far-out spectacle and exploring motivations and backstories is palpable. As with several MCU outings before it, there’s the danger of the humour undercutting the drama. However, that’s not as big a problem here, because this is the funniest MCU movie yet. Since there are so many jokes, some don’t land, and the more juvenile innuendos might make parents nervously hope their kids won’t ask for explanations about them later.

In hyping up the film, Pratt promised Vol. 2 would be the “biggest spectacle movie of all time”. As much as Gunn continues to do his own thing, Vol. 2 is noticeably working overtime to top the first one, and this can sometimes be exhausting. The set-pieces are varied and thrilling and the visuals are dazzling, but sometimes there’s a little too much going on – this is most noticeable during the finale. The visual effects work is splendid (apart from one iffy de-aging job), and the environments are consistently mesmerizing. Production designer Scott Chambliss, whose credits include Star Trek (2009), Star Trek Into Darkness and Tomorrowland, has outdone himself with the cosmic-Rococo palace which Ego calls home. Vol. 2 of Quill’s Awesome Mixtape is the right degree of eclectic: the opening credits unfold to ELO’s Mr. Blue Sky, while the lyrics of Looking Glass’ Brandy become a key plot point.

Gunn’s dialogue preserves the voices of each returning character, and the principals reprise their roles with entertaining aplomb. Pratt has the ‘fun action hero’ thing down pat and yes, gets another gratuitous shirtless scene.

Saldana struts about with utmost confidence, and pulls off a potentially ridiculous scene in which Gamora wields a ludicrously oversized cannon. Bautista continues to prove that he is a gifted comedian, showcasing timing sharper than the daggers Drax brandishes.

Cooper gets some of the film’s best lines, delivering them in the vocal approximation of mange. If you thought Diesel was overpaid for saying the same line repeatedly in the first one, he doesn’t even sound like himself here. Anyone could have voiced Baby Groot. Still, that doesn’t detract from how adorable the character is, those limpid eyes and that plaintive expression sure to elicit “aww”s aplenty from the audience.

Russell is a big get, and if there’s anyone who should play the father of a daring spacefaring scoundrel, it should be Snake Plissken/Jack Burton himself. He’s enjoying himself, and to Gunn’s credit, this doesn’t become an endless string of references to the iconic entries in Russell’s filmography. Like Star Wars before it, Guardians trades in mythical archetypes. This is the tale of a god, the mortal he fell in love with, and the progeny they bore: think Zeus, Danaë and Perseus. The ‘team-up with long-lost dad’ device has been employed in everything from Indiana Jones and the Last Crusade to Aladdin and the King of Thieves. Therefore, even given its fantastical trappings, Vol. 2’s take on things is fairly predictable.

Debicki, looking like she’s escaped the clutches of Goldfinger, is yet another underwhelming MCU villain – but it seems like this was intentional this time around. Rooker gets some surprisingly emotional notes to play amidst a pirate drama in which Yondu gets displaced by mutinying Ravagers. We gain more insight into the rivalry between Gamora and Gillan’s steely, formidable Nebula, and the soap opera-ness is a safe distance from being too cheesy.

Klementieff’s Mantis is a naïf to the nth degree, and jokes are had at her expense while we’re meant to empathize with her. The character’s convoluted backstory in the comics has been handily distilled, and she makes for an interesting addition to the team. Sean Gunn, brother of James, gets an increased part that, if one is being cynical, can be chalked up to nepotism. It’s hard to stay cynical while watching something like Vol. 2, though.

Keep your eyes peeled for several cameos beyond the standard Stan Lee moment, and take a quick glance around the hall to see the cognoscenti nodding in approval when an obscure Marvel character pops onscreen. Five (count ‘em) stinger scenes are spread throughout the end credits. Vol. 2 might not have the same bold, devil-may-care freshness that its predecessor had, but there’s no shortage of vim and verve. The cutest little tree creature you’ve ever seen doesn’t hurt, either.

Summary: While there’s a bit of a struggle in balancing the spectacle with the character beats, Vol. 2 possesses most of the offbeat charm, visual splendour and knee-slapping humour as its forebear.