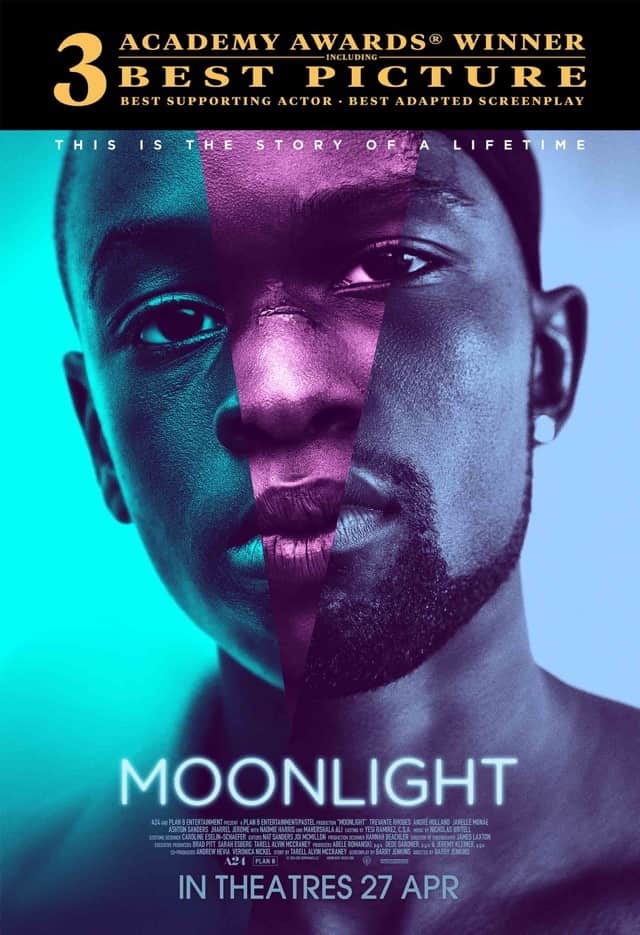 The Best Picture winner at the 89th Academy Awards finally comes to Singaporean theatres. This coming-of-age drama centres on Chiron (Hibbert, Sanders and Rhodes at different ages), who grows up in Liberty City, Miami, Florida. Chiron’s mother Paula (Harris) is a drug addict, and the shy, often-bullied child finds a mentor figure in Juan (Ali), his mother’s drug dealer. Juan and his girlfriend Teresa (Monáe) look after Chiron, and the bond that Chiron forms with Juan and Teresa earns Paula’s jealousy. Chiron’s only friend is Kevin (Piner, Jerome and Holland at different ages). While Chiron and Kevin are close, their relationship is charged. Chiron finds himself the target of relentless bullying from Terrel (Patrick Decile), whom Kevin is friendly with. As he moves through life, Chiron must come to terms with his sexuality and his sense of self.

Moonlight is based on playwright Tarell Alvin McRaney’s unproduced semi-autobiographical play In Moonlight Black Boys Look Blue. When Medicine for Melancholy director Barry Jenkins was looking to make his second film, he was introduced to McRaney’s script through the Miami-based Borscht arts collective. It turns out that both Jenkins and McRaney grew up in Liberty City. Jenkins adapted McRaney’s script into a screenplay, changing the structure to make it a linear story that tracked Chiron’s journey from child to adult. In the original play, the three chapters ran simultaneously. Jenkins and McRaney eventually won the Best Adapted Screenplay Oscar.

A large part of Moonlight’s appeal is that even though it has made history as the first film with an entirely black cast and the first LGBT+-themed film to win Best Picture, it doesn’t come off as a film that’s overly self-conscious about its game-changing status. Moonlight covers ground that we’ve seen in many coming-of-age films before, but it has a distinct freshness to it. In its sincerity, Moonlight never becomes self-indulgent. Jenkins pulls off multiple balancing acts, one of which being the ensuring the film maintains its authenticity, while keeping it relatable no matter what the audience’s background is. Because it is partially inspired by McRaney’s and Jenkins’ own experiences, the dialogue sounds honest and real.

The presentation is slick without sacrificing personality. Jenkins and cinematographer James Laxton were intent on avoiding what they called a “documentary look”, and as such, the images are rich and pop with colour. Each of the film’s three segments is graded in such a way as to imitate different kinds of film stock. This is not something most viewers would notice (this reviewer certainly didn’t), but it contributes to it registering on a subconscious level that there are subtle differences between each distinct section. Composer Nicholas Britell’s chamber music score is exceedingly lyrical, enhancing and enriching the emotion generated by the story and the performances.

Moonlight’s theatre DNA is evident in how much hinges on the performances. Unlike on the stage, film allows the use of closeups, and a lot of the story is told in subtle changes of expression, and the pain that ebbs and flows behind Chiron’s eyes. Hibbert’s Chiron is quiet and shy, Sanders’ teenaged Chiron lanky, awkward and frustrated, and Rhodes’ adult Chiron muscular and sure of himself – or at least, that’s the image he projects. The character of Chiron is developed with such care that it seems like the audience is watching a sculpture taking shape before their eyes. He’s a work in progress that we are witness to, and the audience observes Chiron construct his defences and his persona. The impact that Chiron’s environment and his interpersonal relationships have on him are organic and satisfyingly fleshed out.

Backing up the young actors who play Chiron and Kevin at different ages are reliable performers Ali and Harris. Ali’s screen time is relatively brief, but the character is a crucial one in Chiron’s story. Juan is a drug dealer with a heart of gold, yet Ali’s Oscar-winning portrayal rises far above the stereotypes that come to mind on hearing that description. Harris’ turn as Chiron’s broken, drug-addicted mother is even more impressive when one learns that because of issues with her visa, the British actress shot all her scenes in three days, in between the promotional tour for Spectre. Singer Monáe, arguably the breakout star of Hidden Figures, commands the screen. Teresa is gentle, yet it’s clear that she isn’t someone to be trifled with.

Moonlight has been hailed by black and LGBT+ activists alike as an unmitigated victory, a giant leap forward for the representation of both groups in mainstream popular culture. Moonlight isn’t an ‘issues film’ and its filmmakers aren’t merely jumping on a soapbox and preaching their point of view – its strength is in wearing its heart on its sleeve. While there is commentary on sexuality and race, especially with regards to the perception of black masculinity, all this is in service of the character. It adds up to a work that is captivating, sensitive and powerful.