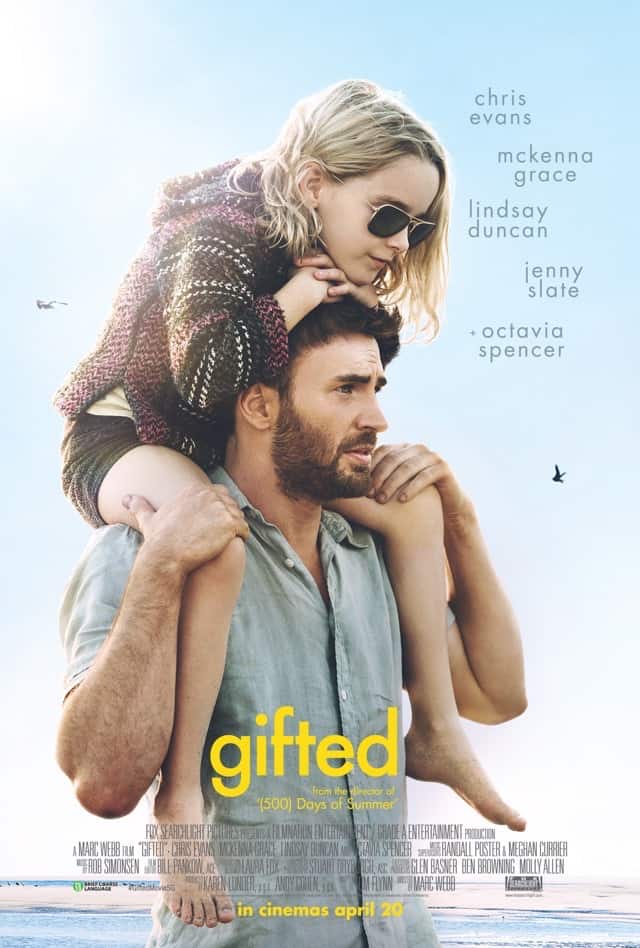 Being a genius must be awesome. If we’ve learnt anything from watching TV, it means you can solve crimes with a single glance, shaming the stubborn cops who ever doubted you in the first place. But those same TV shows have also taught us that being a genius can be as much a curse as a gift, as is evident in this drama.

Mary Adler (Grace) is an exceptionally gifted 7-year-old with a keen acumen for mathematics. She lives in a central Florida town and is cared for by her uncle Frank (Evans), after her mother Diane died when Mary was a baby. Mary’s only friend is her neighbour Roberta Taylor (Spencer), who helps Frank look after her. On Mary’s first day at school, her teacher Bonnie Stevenson (Slate) quickly realises that Mary’s capabilities far outstrip those of her peers. Frank rejects a scholarship for Mary to attend a school that caters for gifted children, saying that his sister wanted Mary to lead a normal childhood. Frank’s estranged mother Evelyn (Duncan) sues for custody of her granddaughter, believing that Mary’s potential will not be realised if she remains under Frank’s care. A battle to determine what is best for Mary ensues.

Gifted is directed by Marc Webb of (500) Days of Summer and The Amazing Spider-Man fame. It’s an intimate drama with comedic elements and while one would expect it to be saccharine and sentimental given the above synopsis, the film refrains from heavy-handed emotional manipulation. Hardened cynics are still advised to give this a wide berth, though.

Tom Flynn’s screenplay is witty and the film progresses at a steady pace. Gifted could’ve easily been overwrought, but Webb demonstrates sufficient restraint. This has the double-edged sword of rendering the story more believable, but also less memorable. Since it revolves around a preternaturally intelligent child and her ‘dad’ who has trouble keeping up, there are moments when Gifted feels like a sitcom. However, this is mitigated by how cinematic the film looks, thanks to cinematographer Stuart Dryburgh’s postcard-ready frames, and location filming on Tybee Island, Georgia, doubling for Florida.

Evans may be best known as Marvel’s star-spangled man, but it seems that he gravitates towards smaller projects, having indicated that the pomp and circumstance that come with promoting the Marvel Cinematic Universe movies aren’t exactly his bag. Both he and child actress Grace work well off each other, creating a compelling bond. While Frank’s heart is in the right place, he makes questionable judgement calls, but the film does a fine job of cluing us in to where he’s coming from.

Mary is the linchpin of the plot, and as such, must be more than a mere plot device. Thankfully, Grace is up for the task. Her performance is mostly in line with the stock ‘precocious kids’ we’ve seen in countless movies and TV shows. However, Grace gets to showcase her acting chops in several dramatic scenes, proving she’s more than just a cute moppet. That said, she is plenty adorable, and when she knits her brows and furrows intensely, it’s hard not to go “aww”.

Evans and Slate share palpable chemistry, and even though the romance between Frank and Bonnie is the most formulaic ingredient in a film made of them, the two performers are enjoyable to watch. It’s no surprise that the relationship carried over into real life, and though the couple has broken up, they apparently remain good friends. Duncan is the right degree of icy as Frank’s supercilious mother. We’re meant to root against her, but she’s not an outright villain either, Duncan fully able to parse those nuances. Unfortunately, Spencer doesn’t get too much to do as the kind neighbour who’s become invested in Mary’s upbringing.

While Gifted doesn’t pack enough of an emotional punch, nor does it delve deep enough into the myriad challenges of raising a child like Mary, is watchable and engaging. Even though it’s comprised of familiar narrative elements, director Webb and writer Flynn still demonstrate skill in telling the story, particularly in parcelling out details about Mary’s mother as the film progresses. Even if it isn’t spectacularly complex or profound, Gifted has significantly more on its mind than the average family drama tearjerker.

Summary: Gifted is a slickly packaged heartstring-plucker that features sincere performances and moving moments, even if it falls short of brilliance.