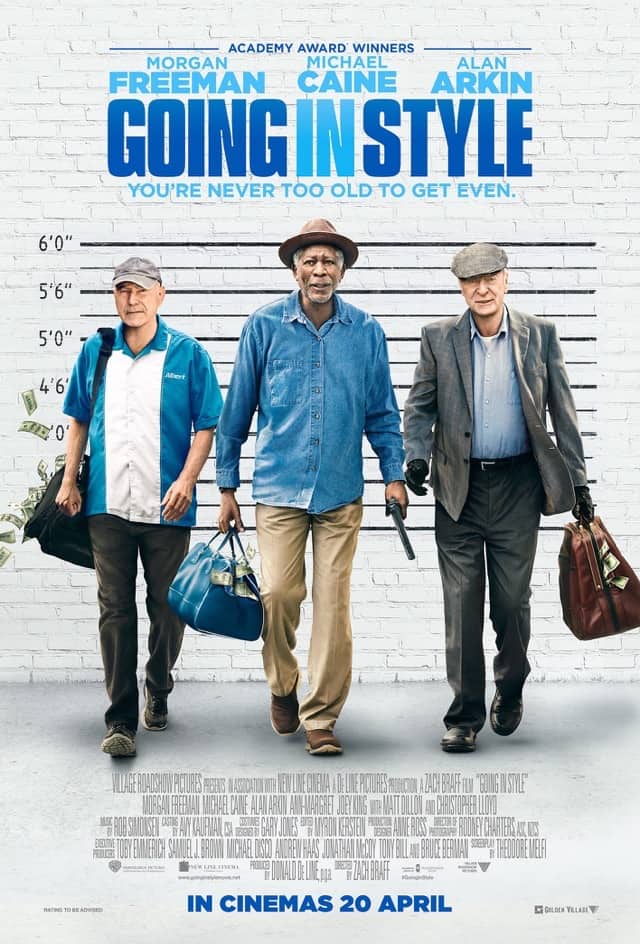 Here in Singapore, senior citizens have been urged to use their SkillsFuture credits to take courses in I.T., languages, cooking and crafts. There is yet to be a SkillsFuture course on bank robbery.

In this comedy, lifelong friends Willie (Freeman), Joe (Caine) and Albert (Arkin) find their pension funds dissolved after the steel mill they work for undergoes a restructuring. Joe, who was caught in a bank robbery and survived unharmed, proposes that the trio steal what is rightfully theirs from the bank. While Willie seems open to the idea, Albert is adamant that the plan will fail. Through his ne’er-do-well former son-in-law Murphy (Serafinowicz), Joe contacts Jesus (Ortiz), who is a part-time pet store proprietor and part-time thief. Jesus trains Willie, Joe and Albert in the art of the heist, so they can pull off the audacious robbery and retrieve their hard-earned pension.

Going in Style is a remake of the 1979 film of the same name, directed by Martin Brest and starring George Burns, Art Carney and Lee Strasberg. Adapted by Theodore Melfi of Hidden Figures fame and directed by Zach Braff, this remake is amiable if rather toothless. This is obviously aimed at moviegoers of a certain vintage, with the filmmakers taking care not to make things too depressing even as in the film touches on how the elderly get gradually forgotten by society and are taken advantage of by financial institutions. Even though its characters are shown smoking weed and one is depicted post-coitus, it’s far from an edgy enterprise and is likely to be a hit with the retirement home set.

This is nothing short of a top-shelf cast, the film’s three leads having all won Oscars. The characters’ personas are generally in line with how we perceive each actor: Caine plays the steadfast team leader, Freeman is warm and has a twinkle in his eye, and Arkin is the curmudgeon who’s grumpy and caustic but ultimately well-meaning. These actors have no problems garnering sympathy from the audience, and while nobody will be nominated for Oscars for this one, their camaraderie is fun to watch.

There are recognisable names in the supporting cast too. Ann-Margret, the Oscar-nominated triple threat pinup of the 60s, is entertaining as a grocery store employee who makes romantic advances towards Albert.

Matt Dillon plays it straight as a dogged FBI agent on the bank robbery case, while Christopher Lloyd is hilarious as the guys’ senile friend Milton. Milton is a one-joke character, the joke being “he’s crazy because he’s just so old”, which isn’t exactly tasteful but is in line with most of the characters Lloyd has played in his recent career.

Caine shares some sweet moments with his onscreen granddaughter Joey King, and it’s additionally amusing because Alfred is Talia al Ghul’s grandpa (The Dark Knight Rises is five years old, we can spoil it all we want). The Jesus character could’ve easily been a bad case of racial stereotyping, but Ortiz fleshes him out well, and the character is depicted as being competent and ultimately good-hearted, even given his criminal actions.

Going in Style is light-hearted if a touch too sentimental at times, and because of its powerhouse cast, can’t help but feel slightly underwhelming. Because so much time is spent with the characters just hanging out before the heist is even proposed, the intricacies of the planning, execution and aftermath of the heist seem rushed through. However, thanks to the overall likeability of its cast and glimmers of wit, Going in Style is easy to go along with.

Summary: You’ll be forgiven for expecting more from a cast of this calibre, but Going in Style’s reliable, talented leads make this a fairly enjoyable old time.