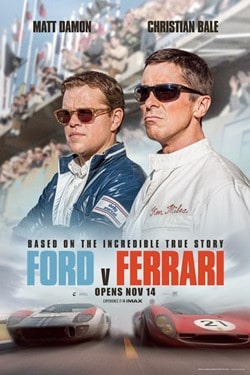 The Low-Down: The story of Ford’s battle to win the 1966 24 Hours of Le Mans is the stuff of auto racing legend and has all the makings of a compelling Hollywood movie: clashing egos, a period setting, boardroom machinations and of course very fast cars. Director James Mangold (Logan, Walk the Line, 3:10 to Yuma) chronicles the ingenuity, adversity, triumph and heartbreak that figured in the historical event. 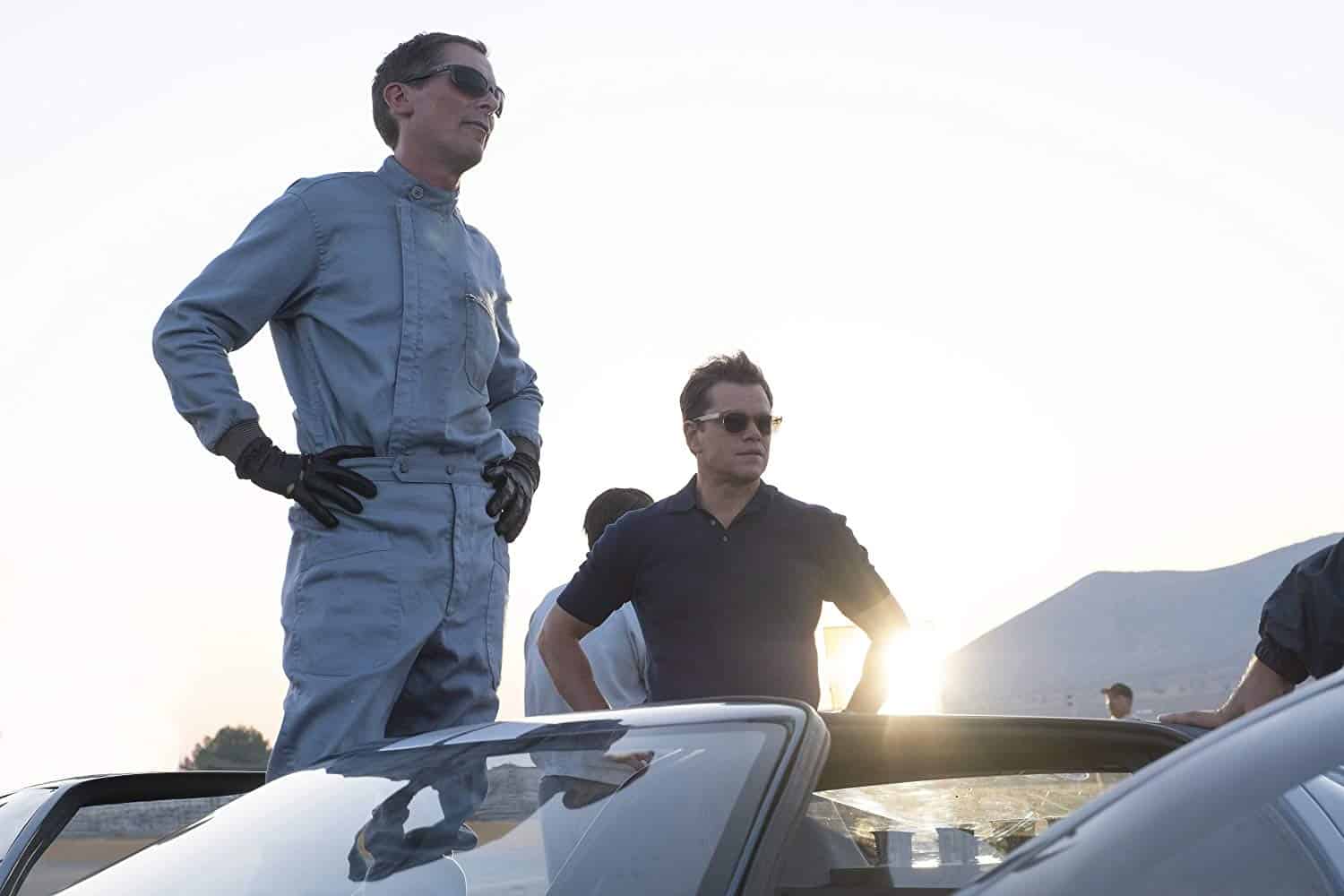 The Story: After Enzo Ferrari (Remo Jirone) flatly rejects a buyout of Ferrari by the Ford Motor Company, Henry Ford II (Tracy Letts) resolves not to take this lying down. Lee Iacocca (Jon Bernthal), the vice-president of Ford, goes to famed car designer and former racer Caroll Shelby (Matt Damon) with an audacious proposal: build a car for Ford to beat Ferrari at Le Mans. 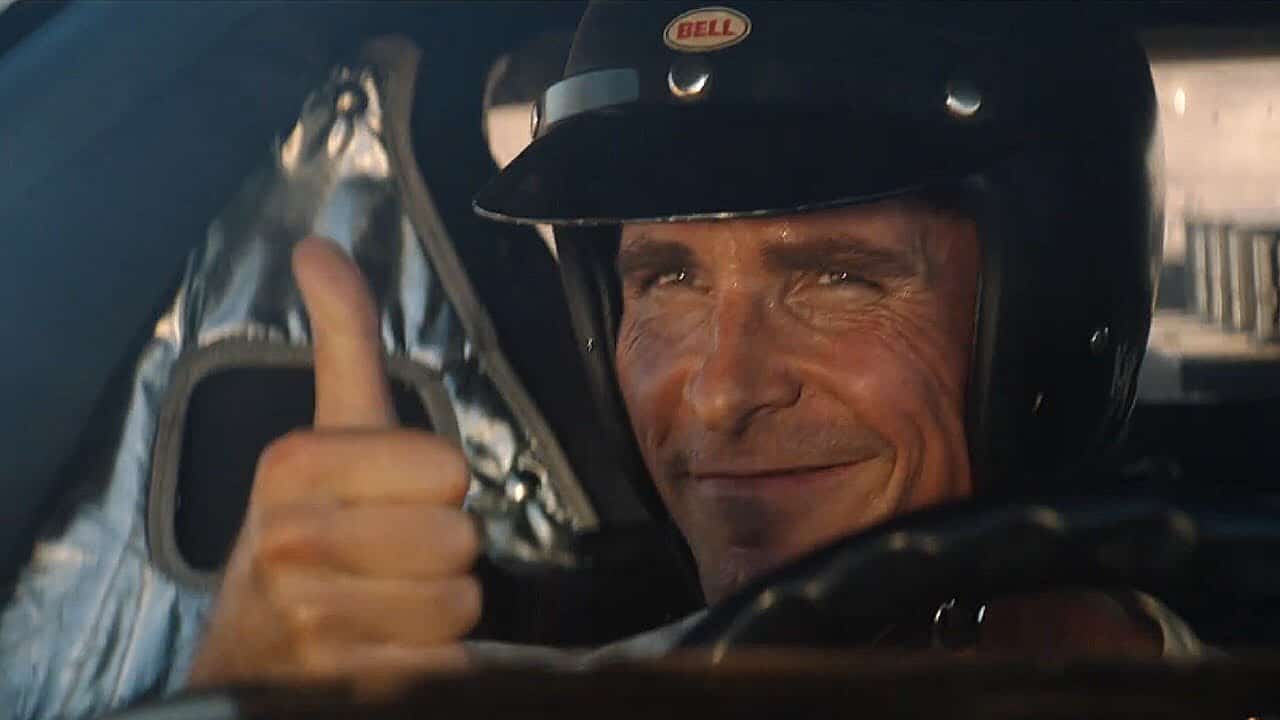 Shelby is convinced that only one man, English race car driver and former WWII tank commander Ken Miles (Christian Bale), can help him and Ford achieve this goal. Miles is a genius behind the wheel with unrivalled intuition, but he is notoriously ornery and earns the ire of Ford executive Leo Beebe (Josh Lucas). Beebe tries to block Miles from joining the Ford team, but Shelby knows they don’t stand a chance against Ferrari without Miles. Together, Shelby and Miles come up with the Ford GT40, a high-performance endurance racing car to take on Ferrari at Le Mans. 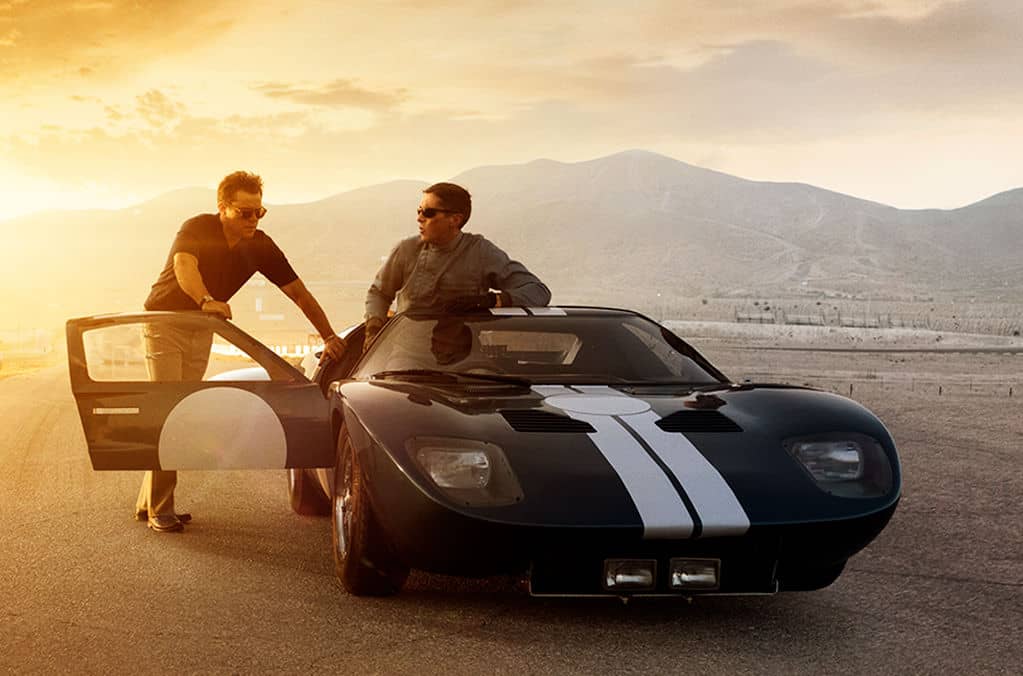 The Good: Ford v Ferrari is a robust film, an old-fashioned historical drama that will make some smile, sigh and say, “They don’t make ‘em like they used to.” However, it is never stodgy the way some films that try to emulate the movies of a bygone era are, and director Mangold infuses the proceedings with dynamism to spare. 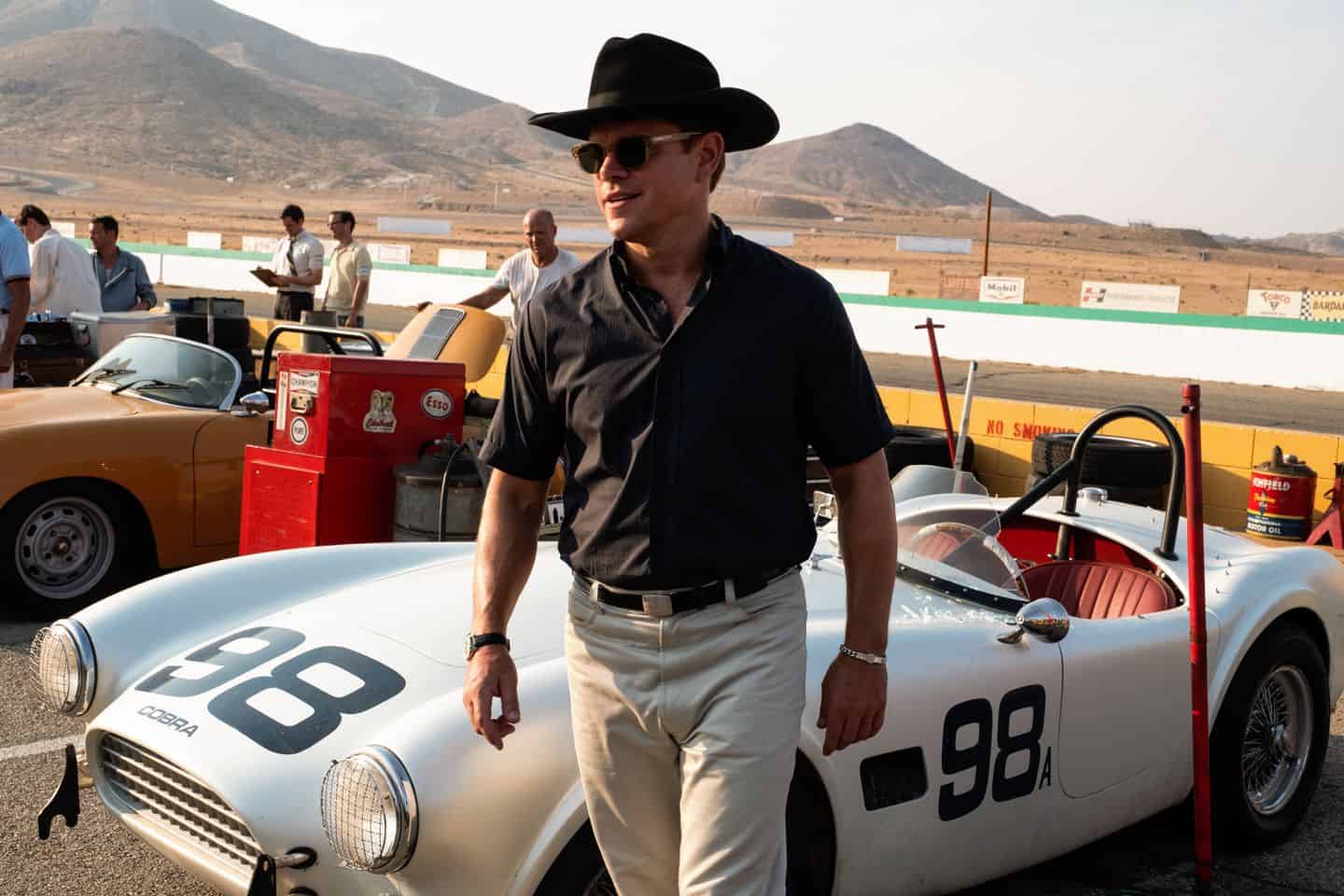 Damon and Bale are superb in the lead roles and act as excellent foils for each other. Damon essays Southern charm as the Texan Shelby while also conveying the frustration of a man who knows what he’s doing but is thwarted by suits who think they know better at every turn. 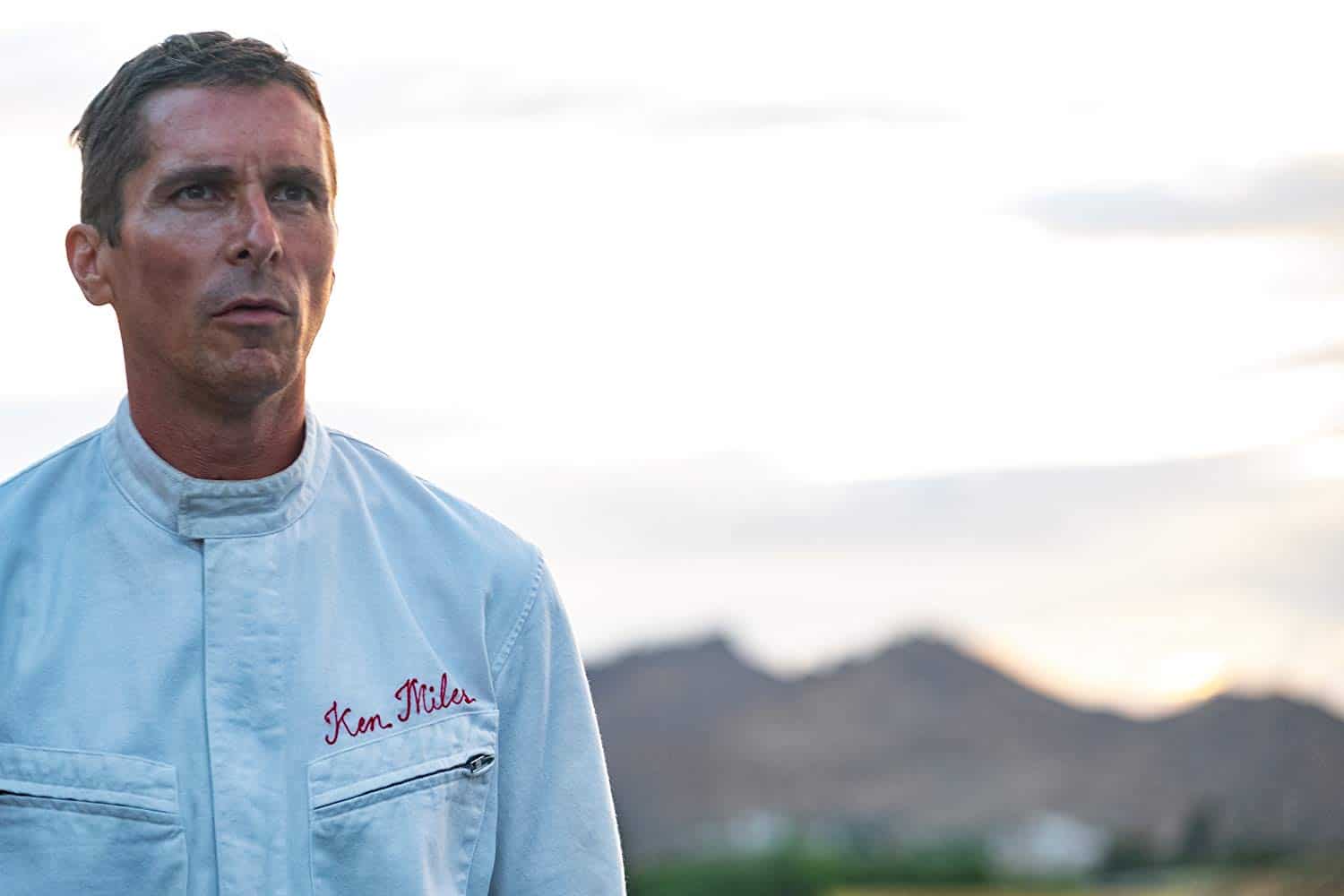 Bale is intense as the fiery Miles, prone to yelling “bloody ‘ell!” and throwing wrenches at people. As is typical for the actor, Bale underwent a drastic physical transformation, shedding the 31 kg he had gained to play Dick Cheney in Vice. At first, it seems like the movie will excuse Miles’ behaviour by saying that he’s so brilliant that it doesn’t matter how he treats anyone, but the film gives him plenty of layers. 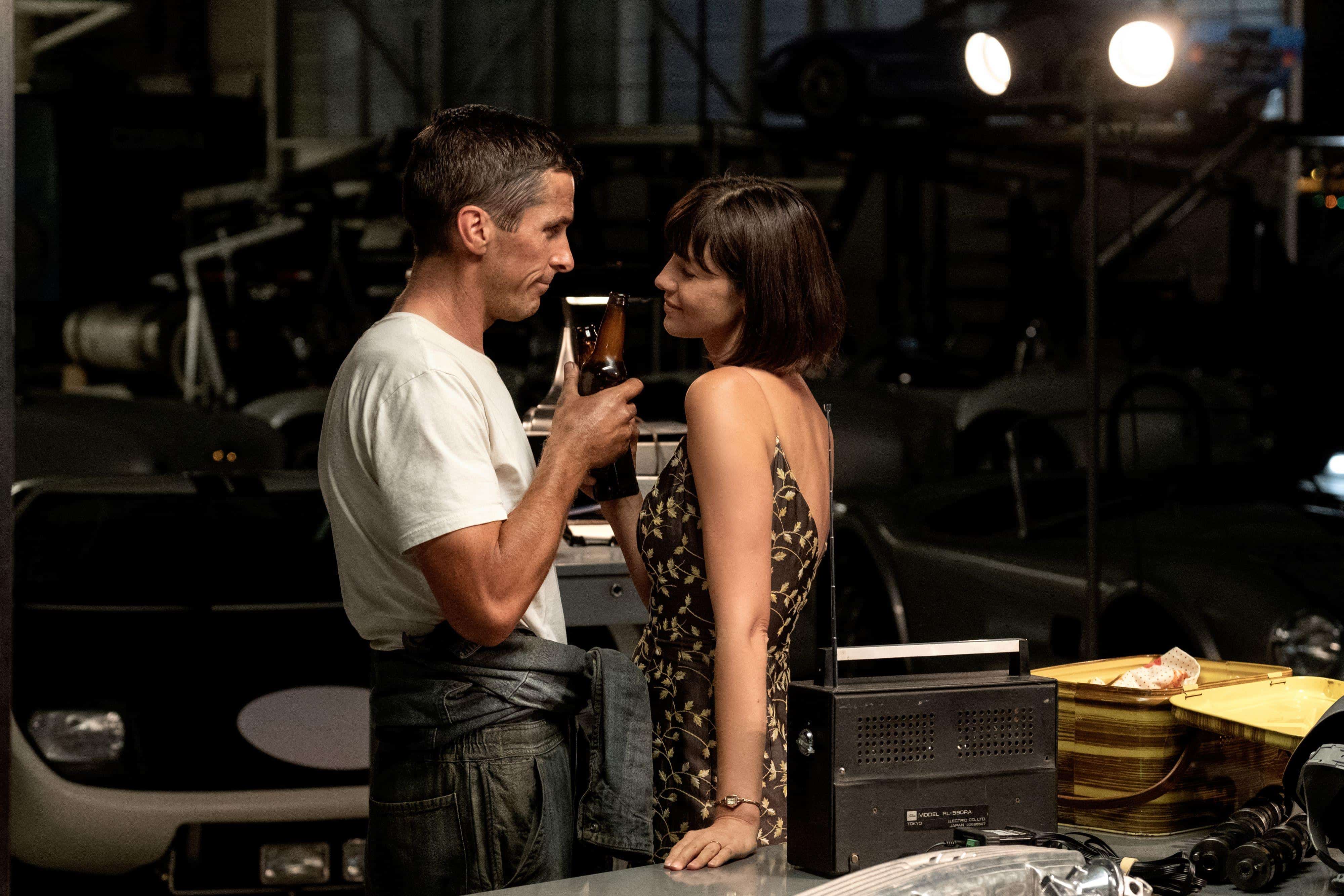 Some of the best moments in the film are the interactions between Miles and his wife Mollie (Caitriona Balfe) and his racing enthusiast son Peter (Noah Jupe). There aren’t many women in the film at all, as can be expected for a movie about auto racing in the 1960s, but Balfe makes an impression as Mollie and there is an effort to make her more than just “the wife”.

The Not-So-Good: There are three main components to the plot of Ford v Ferrari: the racing, the boardroom goings-on at Ford and Ken Miles’ home life. Besides stars Bale and Damon, the racing scenes are what everyone’s here for. As mentioned above, the scenes featuring Miles’ wife and son add a much-needed humanity to the proceedings. It’s the boardroom stuff that makes the movie drag. Yes, it’s important context and we do need to see events like Iacocca’s failed trip to Italy to convince Enzo Ferrari to sell part of the company to Ford, but it can get tedious after a while. There are long stretches of the movie that are edge of your seat material, but it feels like we need to trudge through.

This is at its heart a sports movie with all the hallmarks of one, chief of which being the maverick who’s “the only man for the job” and the one other guy who is convinced of his genius and does everything to keep him on the team. Ford v Ferrari is formulaic, but it is formulaic in a satisfying way, with quite a lot added to the formula to make it more than just that. 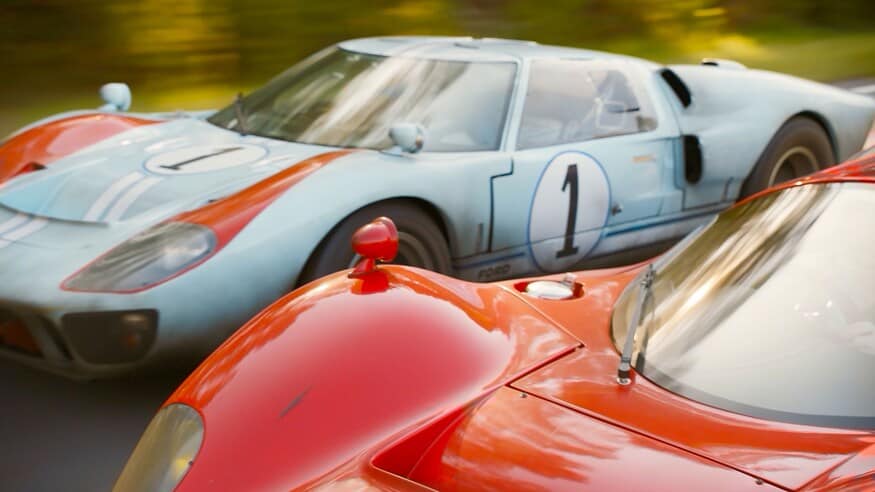 Behind the wheel: The racing scenes are some of the best ever committed to film. They all feel tactile and the visual effects work is seamless. A large team of talented stunt drivers worked on the film: stunt coordinator Robert Nagle’s credits also include Baby Driver, John Wick: Chapter 2, Mission: Impossible – Rogue Nation and several Fast and Furious films. The racing scenes are thrilling and cinematic in a way that makes the spectacle more resonant than that of many big visual effects-driven blockbuster movies. The attention to period detail is also worth noting – in order to recreate the Le Mans Circuit as it was in the 1960s, the crew shot in five different locations that were stitched together using visual effects. Yes, there are several inaccuracies that will be glaring to auto racing devotees (Enzo Ferrari was not personally in attendance at Le Mans 1966, for example), but the layperson will find this all quite convincing, especially by Hollywood standards. 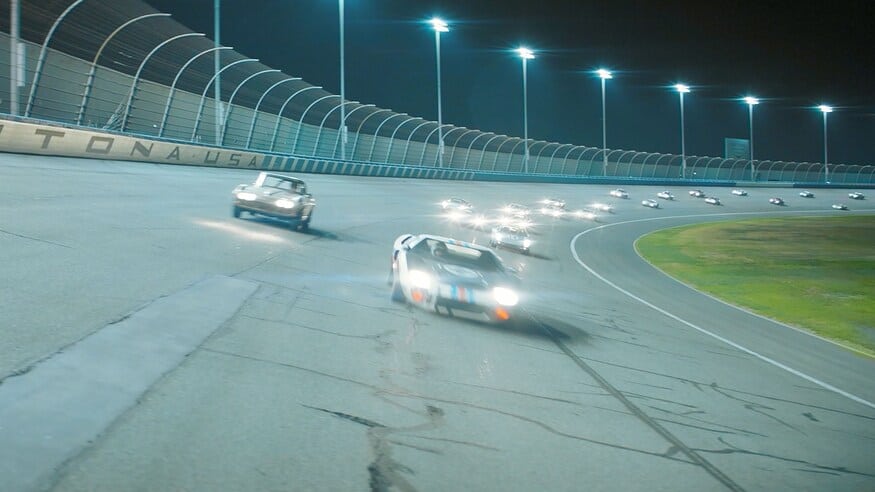 The long and winding road: A movie about the 1966 Le Mans race has been in development for a while: in 2011, it was announced that director Michael Mann would sign on to make the movie, then titled Go Like Hell. In 2013, both Tom Cruise and Brad Pitt were circling the project, with Cruise set to play Shelby alongside Pitt as Miles.

Recommended? Yes. Auto racing enthusiasts will enjoy the meticulous (if never 100% accurate) recreation of the 1966 Le Mans race and the events leading up to that, while the excellent lead performances and action scenes that are exciting no matter how much you like cars ensure everyone else in the audience isn’t left out.