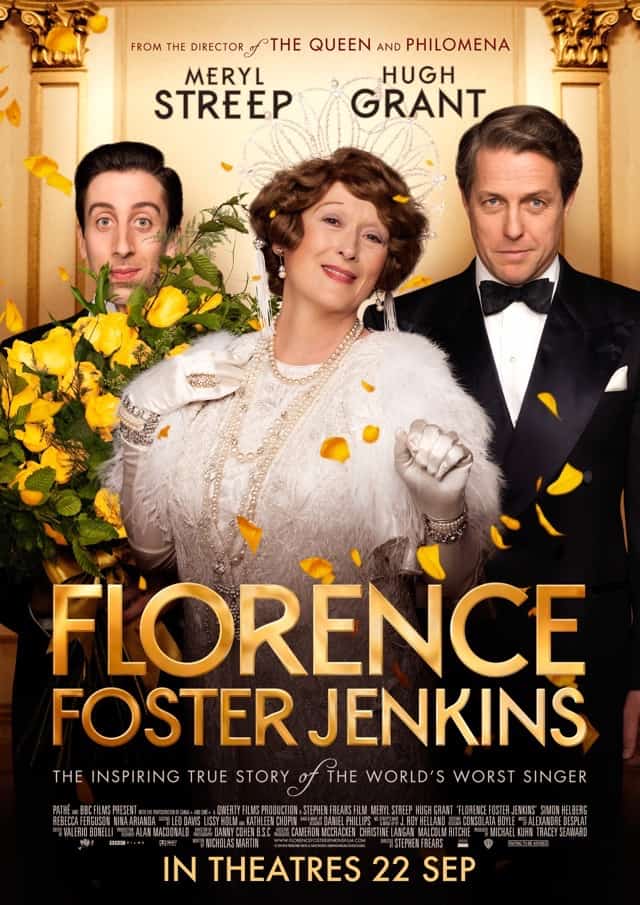 “Follow your dreams, pursue your passion” – we’ve all heard it before, and while it sounds nice, sometimes it might not be the most practical advice. What if you’re passionate about something you’re demonstrably terrible at?

Such was the case with Florence Foster Jenkins (Streep), a wealthy New York socialite with dreams of singing opera at Carnegie Hall. Florence’s husband St. Clair Bayfield (Grant) arranges private concerts to which only vetted audience members are admitted, so as to shield Florence from any possible ridicule she might incur. St. Clair hires pianist Cosmé McMoon (Helberg) to be Florence’s accompanist, and while Cosmé is taken aback by Florence’s complete ineptitude, he accepts the job. When Florence gives her friends a recording of her singing as a gift, it’s not long before she becomes a sensation, with listeners across the country tickled by her tone-deaf performances. While he seems every bit the loving, supportive husband, St. Clair has secrets of his own, secrets in danger of being discovered by Florence.

There is a whole subculture dedicated to the ironic appreciation of films that are “so bad they’re good” – movies like The Room, Birdemic: Shock and Terror and Troll 2. Florence’s appeal as an amateur soprano was very much in the same vein. Multiple plays about Florence have been written and performed, with the 2015 French comedy-drama Marguerite drawing inspiration from her story. This material is right up director Stephen Frears’ alley. Having directed The Queen, Philomena and Mrs. Henderson Presents, Frears is a dab hand at helming both biopics and comedy-dramas. As expected, Florence Foster Jenkins is a light-hearted, silly film. There is an undercurrent of sorrow, but the film comes off more as a celebration of Florence’s own self-delusion and the gargantuan efforts taken to enable her than anything else.

The 1940s New York high society setting is sumptuously dazzling, and Florence’s penchant for over-the-top costumes means that her outfits are never dull to look at. The film has many laughs at Florence’s expense, but also endeavours to make her endearing. There’s no malice behind what she does, and she is kind to those around her. However, it is frustrating that someone so unskilled at her chosen art form was given the platform to showcase her ‘talents’ just because she was wealthy and well-connected. Florence is a sympathetic figure in no small part because of her chronic illness, but as a critic, this reviewer can’t stand 100% behind the reinforcement of an artist’s self-delusion in lieu of self-improvement.

Most of Streep’s recent high-profile roles have had a degree of silliness to them, and this is obviously no exception. She is having plenty of fun rocking those ridiculous costumes and yelping as if she were a Chihuahua who has stubbed its toe, but perhaps this wanton goofiness isn’t the best use of her abilities. To draw a comparison to previous leading lady in a Frears film, Helen Mirren seems to have a healthy mix of lighter fare and serious dramatic roles in her recent résumé. Even then, Streep remains a commanding presence and her performance is supremely entertaining, while also heart-rending when required. It’s pretty hard to sing badly on purpose and not damage one’s vocal cords, so Streep deserves credit in mastering that particular skill.

Here, we have Hugh Grant playing a typical Hugh Grant role – the charming, ever so slightly awkward English gentleman. A subplot revolving around St. Clair and Rebecca Ferguson’s character Kathleen brings many of St. Clair’s foibles to the fore, so there’s more to him than just “supportive spouse”. Helberg steals the show on multiple occasions as the beleaguered, long-suffering accompanist who is bewildered that no one in her circle is objecting to Florence’s singing. Half of this movie comprises priceless reaction shots: shock, incredulousness, uncontrollable laughter. Helberg’s reactions, particularly when Cosmé first hears Florence sing and is absolutely mortified, further prove that the Big Bang Theory star has considerable comedic chops. Helberg did the piano-playing for real too.

While Florence Foster Jenkins plays it broad for the most part, there are scenes that pack considerable emotional impact. This is a film that’s put together by people who know what they’re doing, with a veteran director leading the charge. However, Florence Foster Jenkins shies away from challenging the idea that behaviour like this should be challenged. Towards the film’s conclusion, St. Clair scrambles to conceal a negative review of Florence’s performance from her, for fear that it would be too much to handle. If it is your nature to have that thin a skin, perhaps the performing arts just aren’t for you.

Summary: It’s entertaining and funny, but Florence Foster Jenkins passes up the chance to examine the implications of blindly enabling someone who’s bad at something instead of helping them actually improve.