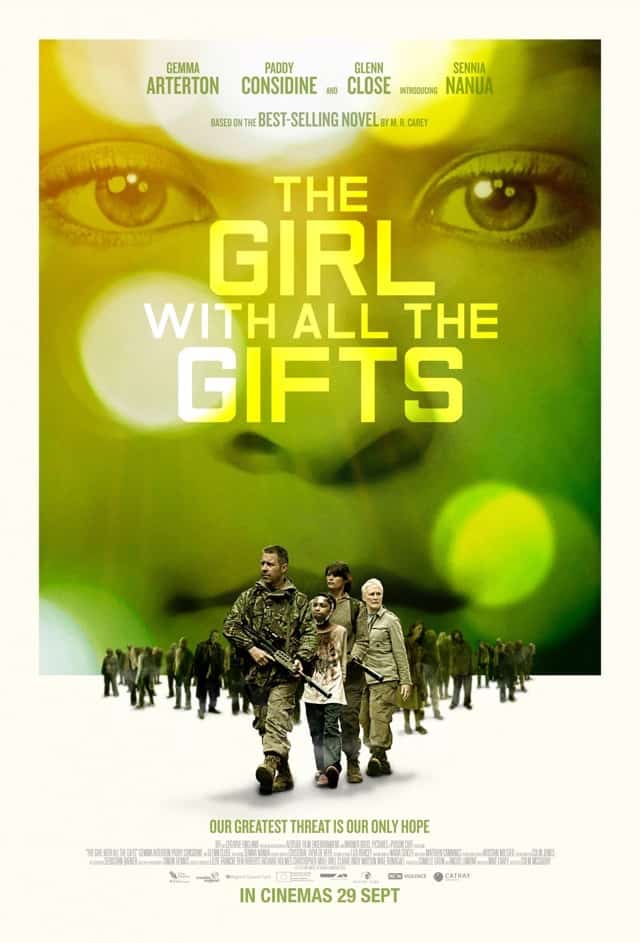 We know what you’re thinking: another zombie movie? In this one, there’s a bit of a twist, in the form of kinda-zombie kids. A fungal disease has brought the world to its knees, with those infected turning into bloodthirsty undead ‘hungries’. Dr. Caroline Caldwell (Close) identifies a group of children as humanity’s last hope. While they crave human flesh, they are still autonomous and not mindless monsters. Of these children, the inquisitive, precocious Melanie (Nanua) stands out. Teacher Helen Justineau (Arterton) forms a bond with Melanie, but the soldiers at the military installation refuse to view the children as actual human beings. Dr. Caldwell is close to devising a vaccine for the disease, but she will need to dissect Melanie in order to create the cure. When the base is besieged by hungries, Helen, Melanie, Dr. Caldwell, Sgt. Eddie Parks (Considine) and Pvt. Kieran Gallagher (Akinade) go on the run. They have to navigate a desolate London overrun with hungries as Helen tries to protect Melanie from Dr. Caldwell.

Writer Mike Carey, known for his comics work for DC, DC’s Vertigo Comics imprint and Marvel, adapted The Girl with All the Gifts from his own novel of the same name. Don’t let the fact that its protagonist is a little girl fool you: this is a brutal, violent film that is sometimes difficult to watch. Perhaps this is a way of keeping the sentimentality in check. For the most part, director Colm McCarthy finds an appropriate balance between the gore and the emotional core of the film, such that these two aspects do not seem incongruent. Even though this British production is a smaller film than its Hollywood counterparts, the production values are decent and the post-apocalyptic set design is sufficiently authentic. It’s just that the cityscapes overtaken by growth and the abandoned storefronts aren’t too different from what we’ve seen in similar films and television shows.

Oddly enough, the story The Girl with All the Gifts reminded this reviewer of the most was Roald Dahl’s Matilda. Melanie is analogous to Matilda, and Helen, the kind teacher in an otherwise harsh environment, is analogous to Miss Honey. As far as we can remember, Matilda didn’t devour any live cats, though. This aspires to be more cerebral than your average zombie movie, with literary allusions weaved into the plot. It is reminiscent of Alfonso Cuarón’s Children of Men, which Carey has cited as his favourite dystopian movie, though it falls far short of that film’s profundity. The English setting will also conjure up memories of 28 Days Later. The ethical quandaries we’re presented with are worth pondering, but the film lacks momentum and urgency, with the zombie action scenes few and far between.

As the titular girl, Nanua has a fair bit of dramatic heavy lifting to do. The character’s cheerful disposition and sunniness stand in stark contrast with gloomy end times milieu. Her chipper attitude is juxtaposed with the savage impulses she’s unable to control, with several instances of pitch-black humour derived from this. There are some scenes in which Melanie turns aggressive that Nanua has a bit of trouble playing, but for the most part she’s a very watchable performer.

Arterton’s persona has always been a mix of sweet and sexy, a kind of throwback pin-up. Here, she ditches the glamour and is sufficiently convincing as someone who’s lived underground in the aftermath of a zombie apocalypse. The bond that Helen and Melanie share is moving, and we can get behind Helen’s protectiveness over Melanie. Considine plays somewhat against type as a hard-edged soldier who is initially hostile to Melanie and the other children, but warms to her as their journey progresses.

As expected, Close delivers the standout performance. The cold, analytical Caldwell, who seems to have no qualms about killing children, is ostensibly the antagonist. However, the character is worlds away from a cackling Cruella de Vil-type villain. Her motivations and rationale are laid out nicely, and there are times when her utilitarian reasoning does make sense. However, because of how loveable Melanie is, we don’t end up going, “sure, whatever, just kill the girl.”

While the blend of heartfelt emotion and horror movie viscera works better than one might think, The Girl with All the Gifts ends up being particularly frustrating. Its ending isn’t a total cop out, but it is unsatisfying in its own right. For something that purports itself to be a fresh take on the zombie movie sub-genre, it’s also derivative, with multiple parallels to the video game The Last of Us, including the zombie disease originating from the Cordyceps fungus. Taking all that into account, it still is intelligent, moving, gripping and scary enough to appeal to genre fans, if not the sublime triumph it could’ve been.

Summary: The Girl with All the Gifts is sensitively performed and has enough stomach-turning viscera to appease gore-hounds, but is marred by a sluggish middle act and an unsatisfying ending.