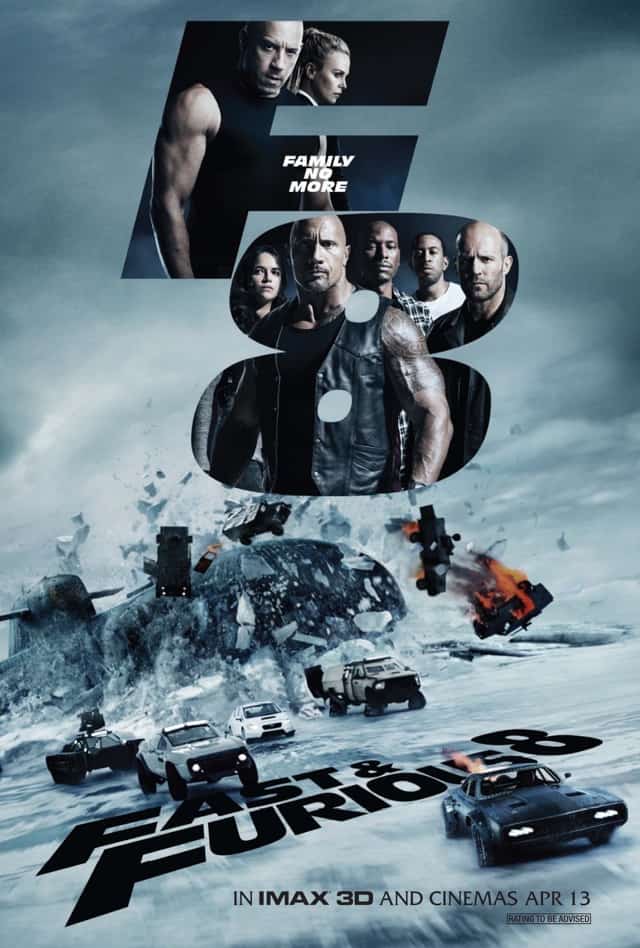 The driving force behind the Fast and Furious franchise – besides international box office – is ‘family’. Groan-inducing though it may be, many moviegoers have warmed to the crew led by Dominic “Dom” Toretto (Diesel), and audiences around the world feel a kinship with this team. In this, the eighth entry in the franchise, we watch the family get torn asunder.

Dom and his wife Letty (Rodriguez) are enjoying their honeymoon in Havana, Cuba. The couple is called away for a mission in Germany, where the team must prevent an Electromagnetic Pulse generator from falling into enemy hands. Dom, Letty, DSS agent Luke Hobbs (Johnson), motormouth Roman (Gibson), mechanical whiz Tej (Bridges) and hacker Ramsey (Emmanuel) pull off the mission without a hitch – until Dom betrays them. The woman who has somehow convinced Dom to cast aside his loyalty is elusive, powerful cyberterrorist Cipher (Theron). To track down Dom and Cipher, spymaster Mr. Nobody (Russell) places the team’s nemesis Deckard Shaw (Statham) alongside them. Everyone, especially Hobbs, is upset that they must work with Shaw, but desperate times call for desperate measures. This latest adventure takes the team from New York City to the frigid Russian tundra, as they try to stop Cipher and win Dom back to the side of good.

Director F. Gary Gray, who helmed Straight Outta Compton and the remake of The Italian Job, takes the wheel from Furious 7 director James Wan. While it’s officially titled ‘The Fate of the Furious’, it’s promoted as Fast & Furious 8 in several territories. With the superstar cast and key behind-the-scenes personnel including writer Chris Morgan, cinematographer Stephen F. Windon, composer Brian Tyler and second unit director/stunt coordinator Spiro Razatos returning, not too much has changed, even with a new director.

Under the guidance of Justin Lin, who helmed the third through sixth entries in the franchise, the series has morphed from being ostensibly about car racing culture into a globe-trotting military action/heist behemoth. Fast & Furious 8 opens with a street race in Havana, to remind viewers that the series hasn’t forgotten its roots. It takes confidence to open the film with a relatively humble set-piece, especially when compared to the mayhem that follows.

When the sixth film came out, some viewers were wondering just how the series would continue to top itself in the outlandish car stunt stakes. Just when it seemed there’s nothing new under the sun, Fast & Furious 8 launches a submarine at the crew. This is a series that’s always in danger of swallowing itself up, but Gray presides over things with a firm-enough hand. A sequence in which Cipher orchestrates unbridled vehicular chaos on the streets of New York City is inventive, and in between all the big-budget bombast, we get to witness a good old-fashioned prison brawl. Once again, Razatos deserves credit for staging grand, entertaining spectacle.

Watching the action scenes is like watching a penguin glide gracefully through the water. Sitting through the dramatic scenes is like watching said penguin waddle on land: it’s ungainly, but endearing. The soap opera quotient is even higher than before. Dom goes rogue! Shock, horror! While Morgan’s screenplay heaves with cheesiness and Gibson’s ad-libbing tends to make scenes less funny, we have to admire the logistics of it. Not just the logistics of staging the action, but the sheer mechanics of constructing the screenplay, such that each member of the ever-expanding cast gets their time to shine. There are a few twists, a cameo or two and a reasonably clever gambit is put into play, but it’s nothing as audacious as the chase with the safe(s) in the fifth film. While the seventh film made a fair few viewers tear up with its closing tribute to the late Paul Walker, the emotional scenes here make considerably less impact.

The massive ensemble works like a well-oiled machine, anecdotal murmurs of friction between Diesel and his castmates notwithstanding. Gray wrings a good amount of tension from the premise of Dom turning against his teammates, with Rodriguez’s Letty naturally being the most hurt.

Johnson and Statham play off against each other wonderfully, trading juvenile barbs. Having the big bad villain of the seventh film get all chummy with the crew does run the risk of diminishing Shaw’s intimidation factor, but that’s not too much of an issue because there’s a new villain in town.

Said villain is played by Theron, reuniting with her Italian Job director and co-star Statham. Theron’s awesome in pretty much everything (we like to pretend Æon Flux doesn’t exist) and she has just enough fun with this role. Cipher is coolly evil and her dastardly scheme is very Bond villain-esque. However, unlike the Shaw siblings from the last two instalments, Cipher is mostly a passive villain, standing in front of a bank of computers, shouting things like “hack ‘em all” to her minions. It’s not the best use of Theron, but we’re glad she’s in the series anyway.

Perhaps it’s because she was only introduced in the previous film, but Emmanuel’s Ramsey doesn’t really feel like a part of the team yet. Scott Eastwood plays Mr. Nobody’s apprentice who gets picked on by the crew and feels extraneous. But if you’re already invested in the series and its characters, this is a fun ride that feels shorter than its 136-minute running time. Gray does a fine job of preserving the series’ personality while furthering the team’s delightfully ludicrous exploits.

Summary: It’s as cheesy and outlandish as ever: Fast & Furious 8 sticks to what works for the franchise and even if it doesn’t break ground the same way that submarine did, it’s enjoyable.