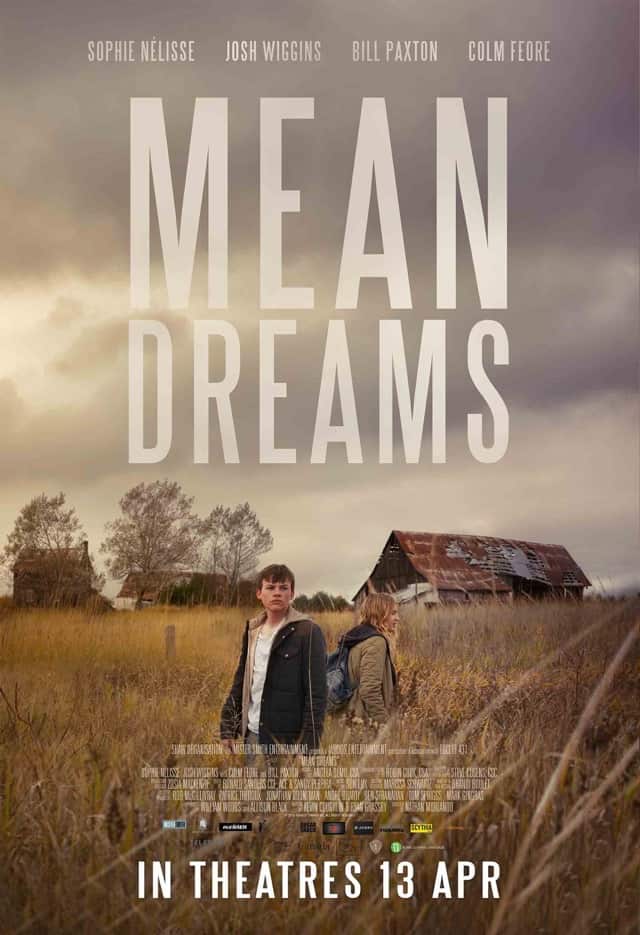 This is a movie about a boy, a girl, a dog and a duffel bag full of money. It sounds like it could be a comedic romp, but it really isn’t. The boy in question is Jonas Ford (Wiggins), a farmer’s son who quickly falls for his new neighbour, Casey (Nélisse). Casey’s father Wayne (Paxton) is a police sergeant who is abusive towards Casey. When Jonas tries to protect Casey from her father, Wayne threatens Jonas and his family. When Jonas comes across a duffel bag filled with nearly a million dollars, he spirits Casey away. Together with Casey’s dog Blaze, the young couple go on the run, pursued by Wayne’s boss, the sheriff known only as ‘the Chief’ (Feore). The teenage fugitives must fend for themselves, their respective futures hanging in the balance.

Mean Dreams comes from Canadian director Nathan Morlando and is written by Kevin Coughlin and Ryan Grassby. An indie crime thriller melded with a coming-of-age romance, Mean Dreams is intense, but never quite reaches the emotional high this reviewer was hoping it would. Cinematographer Steve Cosens presents the Canadian landscape of Sault Ste. Marie with equal measures of grace and dread, and the score by Son Lux features some exciting percussion work. It’s shot in Canada, but appears to be set in the U.S. Rust Belt. Mean Dreams doesn’t lack in atmosphere, but because it’s as dreary as it is, it can be a slog to sit through, feeling significantly longer than its 105 minutes. It’s set in the present day, but feels like a film that could’ve been made in the 70s. Dialogue like “it’s a mean world the angels left us” could’ve easily felt silly, but instead is effectively fatalistic.

The film is carried by its young leads. Nélisse’s moving turn in The Book Thief endeared her to many a filmgoer even if the film itself was too treacly, and her performance in Mean Dreams indicates that she continues to be a young talent to look out for. While there’s an obvious vulnerability to Casey, seeing as she is a victim of abuse, she also challenges Jonas’ perception that she is the damsel in need of rescuing.

Wiggins gives off young Matt Damon vibes, making for a wholesome, winsome lead. Both Jonas and Casey seem ill-equipped to face the adult world, having to do a whole lot of growing up overnight. While there are elements to the romance that seem too syrupy and twee, this feeling is offset by the film’s overall grim tone.

Mean Dreams is one of the late Paxton’s final films. Paxton may be best-remembered for his roles in James Cameron’s films, and he did star in HBO’s Big Love, but he’s never really been viewed as a leading man. He was a consummate character actor, and is wholly intimidating without resorting to wanton scenery chomping as the main antagonist of the film. When he’s first introduced, Wayne is acting all sweet towards his daughter, but her uneasy manner indicates that something’s not quite right with the man. Feore backs Paxton up as the sneering authority figure, and the fact that the movie’s villains are cops, who are supposedly sworn to uphold the law, makes them even scarier.

Mean Dreams presents us with cruel adults shattering the innocence of kids, with said kids running away and possibly fighting back. We have seen indie films tackle these themes before, but the strong performances and evocative cinematography give Mean Dreams a verve, even if it lacks the snap it needs to be truly engaging.