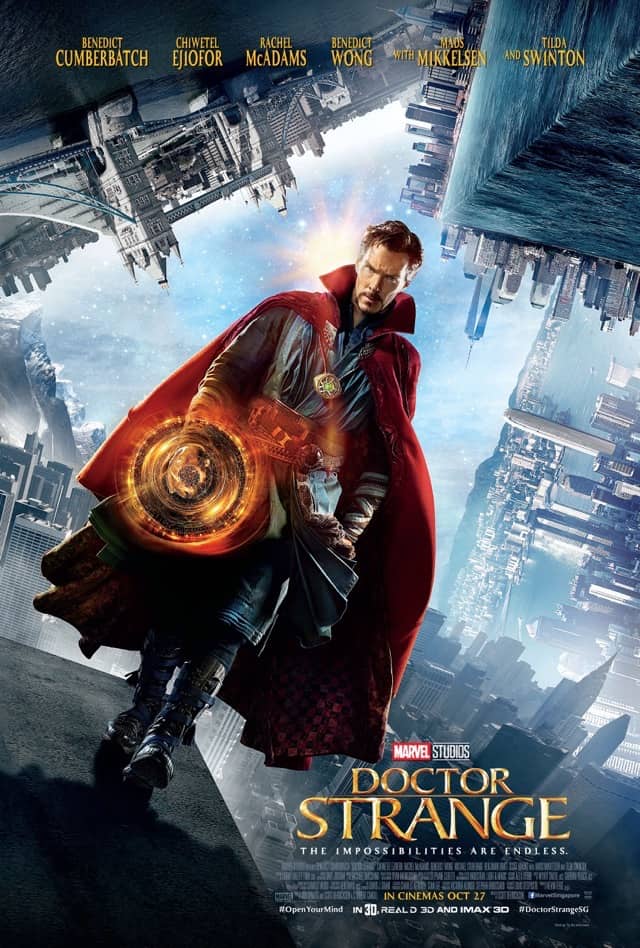 The Marvel Cinematic Universe charts a path into realms unknown with this fantasy adventure, the 14th (!) film in the ever-expanding canon. Our hero is Dr. Stephen Strange (Cumberbatch), a gifted but self-absorbed neurosurgeon whose life is upended following a car crash. His hands irreparably damaged, Strange is unable to find satisfactory treatment through western medicine, and heads east to Kathmandu. In a sanctuary called Kamar-Taj, the Ancient One (Swinton) holds court, opening Strange’s eyes to unexplainable wonders. Strange sets about mastering the mystic arts, guided along by the Ancient One’s disciple Karl Mordo (Ejiofor) and Wong (Wong), the keeper of Kamar-Taj’s sacred relics. The Ancient One’s students and humanity at large is threatened by Kaecilius (Mikkelsen), a former pupil who went rogue and is meddling in dark powers that could doom humanity. As Strange’s colleague and ex-girlfriend Dr. Christine Palmer (McAdams) comes to terms with his transformation, Strange must use his newfound abilities to defeat Kaecilius and his followers.

For all of the MCU’s strengths and its branching into various subgenres, things have been feeling samey-samey. Audiences crave something all-new, all-different, and Doctor Strange is different enough. Director Scott Derrickson, known for horror films like Sinister and The Exorcism of Emily Rose, takes on his biggest, most ambitious project yet, emerging out the other side victorious. This is a film that’s packed with eye-popping invention. Production designer Charles Wood and visual effects supervisor Stephane Ceretti, among the legions of artists and technicians involved, are worthy of commendation.

The trailer had us worried that the imagery would be too similar to that of Inception, which also showcased cities folding in on themselves. It turns out that the trippiest stuff has been saved for the film itself, with kaleidoscopic vistas, Doctor Who-style tunnels through space-time, buildings morphing and shifting like Dark City on steroids, and ghostly Astral projections floating between this plane and the next among the tricks up its sleeves. The mind-bending geometry gives the action sequences a delightfully unpredictable landscape in which to play out. The results resemble weaponised Escher artwork.

Doctor Strange may serve up eye candy unlike anything we’ve seen from the MCU so far, but for the most part, this is a straightforward hero’s journey origin story. The haughty doctor must be brought to his lowest point, accept that there are things in this world and others beyond his understanding, and come into his own as a superhero. Things move along nicely and the screenplay by Jon Spaihts, C. Robert Cargill and Derrickson is witty without being smug. Just as Deadpool was a standard-issue origin story dressed with self-referential irreverence and attitude, Doctor Strange is a standard-issue origin story spiced up with logic-defying dazzlement.

This reviewer will admit to thinking Benedict Cumberbatch wasn’t the best man for the job, and that Cumberbatch was cast in an effort on Marvel’s part to ride the Sherlock wave. This reviewer was wrong. It is gratifying to see a performer take the material as seriously as one would treat Shakespeare. Cumberbatch’s commitment to the part is yet another indicator that the days of “this is based on a comic book so it must be mere frivolity” are behind us. Cumberbatch rocks one of the most convincing American accents we’ve heard an English actor affect, and looks quite dashing in those robes and that cape. While we do already have an arrogant, brilliant MCU hero in the form of Robert Downey Jr.’s Tony Stark, Cumberbatch’s portrayal of Strange doesn’t feel like a repeat of that. Having an actor of Cumberbatch’s calibre in the MCU roster is something we as geeks are grateful for.

Ejiofor’s Mordo is by-the-book and serious, but the actor’s charm does shine through. Comic book fans know what becomes of the character, and that’s hinted at here. While Swinton is fine as the knowing mentor figure with a glint in her eye, the movie doesn’t make as a solid a case for its whitewashing as it promised. In the source material, The Ancient One is an elderly Tibetan man – your stock “Asian mystic” archetype. Co-screenwriter Cargill compared the dilemma to Star Trek’s no-win scenario, the Kobayashi Maru. Adhering to the comics and depicted an elderly Asian man as the wise mentor would have been one kind of racist, but it can be argued that substituting said Asian man with a white woman is just another kind of racist. The implication is that a white person has bested the locals at their own game and is now running the show. What we’re really saying is: wouldn’t Michelle Yeoh have made an awesome Ancient One?

McAdams doesn’t get a whole lot of screen time, but it’s great to see a lead female who isn’t merely the designated girlfriend. In fact, this is probably the first MCU leading lady who’s introduced as our hero’s ex. She’s also shown to be so skilled a surgeon, that even Dr. Strange acknowledges her prowess. Wong has been reinvented from the subservient tea-pouring butler of the original to a stern librarian who refuses to laugh at Strange’s jokes. Strange, Wong and Mordo end up working well together as an unlikely team.

By now, you’ve read the phrase “MCU villain problem” in countless think-pieces. Alas, as far as villains go, Kaecilius is quite generic, but Mikkelsen does give the character a sinister, authoritative presence. The design flourish of burned-out crater-like scars around his eyes is creepy. Keep a lookout for martial artist/actor Scott Adkins as one of Kaecilius’ goons.

The levity exhibited throughout most of the MCU movies is present here as well, with Strange making some smart-alecky quips and the sentient Cloak of Levitation behaving akin to the Magic Carpet in Disney’s Aladdin. Just as elsewhere in the MCU though, the jokes sometimes diminish the stakes.

Doctor Strange may not bend the established rules of the MCU completely beyond all recognition, but it reinvigorates the formula with a satisfyingly unique aesthetic. Stick around for a mid-credits scene and a post-credits stinger.

Summary: A commanding performance from Benedict Cumberbatch and a surfeit of exciting, richly-realised visuals make this a supremely entertaining MCU outing.