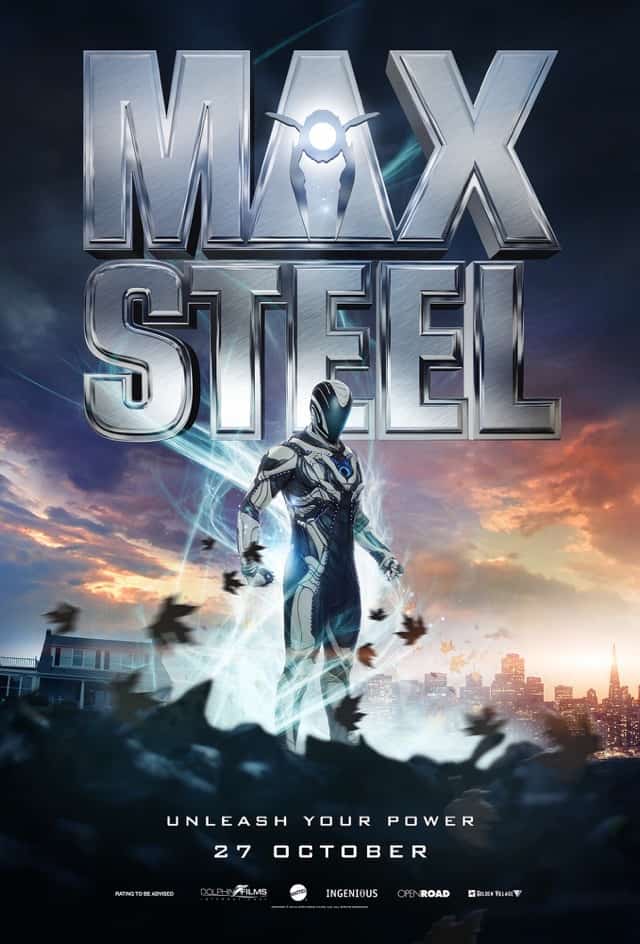 Hasbro and Mattel are kind of the Marvel and DC of toymakers. Hasbro’s Transformers films are hugely successful in spite of their poor quality, and there are plans underway to weave the G.I. Joe and Transformers franchises into a shared cinematic universe. Over at Mattel, after years of delays, a live-action Max Steel film limps into theatres. Yes, Hasbro is Marvel and Mattel is DC in this analogy.

After years of moving throughout the country, Max McGrath (Winchell) and his mother Molly (Bello) return to the small town in which he was born. Max’s father Jim (Doyle), a scientist, was killed in a lab accident when Max was a baby. Max goes to Dr. Miles Edwards (García), his father’s former colleague at biotechnology firm N-Tek, to learn more about the circumstances under which his father died. Sofia Martinez (Villafañe), a girl at Max’s new school, takes a liking to Max. However, Max begins displaying erratic behaviour as a side effect of developing superpowers: he gains the ability to manipulate and project liquid energy from his fingertips. The levitating alien orb Steel (Brener) finds and befriends Max. When Steel symbiotically bonds to Max, they fuse into the superhero Max Steel. Max must come to grips with his newfound powers as he fends off a shadowy threat and pieces together his father’s past.

Max Steel kind of feels like something you’d let your kids watch if they weren’t well-behaved enough to deserve seeing the Marvel Cinematic Universe films. In this age when superhero action flicks are done so often and so well, Max Steel comes off as a low-rent knockoff at best. When it’s not dull, it’s annoying. Every single hoary superhero origin story trope gets a re-tread. This film will put most audiences in a stupor, with viewers muttering in a half-conscious state of recognition “oh, that’s from Spider-Man” or “that kind of reminds me of Power Rangers”. Mattel’s Masters of the Universe property was, like Max Steel, created with the express purpose of selling toys, but a more or less fleshed-out mythology has developed around it. That doesn’t seem to be the case with Max Steel, which when it was created in 1997, tapped into the ‘Xtreme!’ zeitgeist. As originally conceived, Max Steel was kind of an extreme sports junkie superspy with a sci-fi tinge.

The premise has since been reworked into a young adult ‘chosen one’ plot: take the afore-mentioned Spider-Man and replace “radioactive spider bite” with “robot alien suit” and you get the picture. While the design work is largely uninspired, the production values aren’t terrible: the physical suit itself was created by Legacy Effects, who have constructed the non-CGI Iron Man suits for the Marvel Cinematic Universe. Steel convincingly occupies the same space as Max. The love child of Navi from The Legend of Zelda and 343 Guilty Spark from Halo, Steel is exactly as irritating as that sounds. Brener’s rapid-fire neurotic delivery is as much to blame as the painfully unfunny lines that Steel spits out.

‘Chosen one’ protagonists have a not-undeserved rap for being blank slates. Max is almost prodigiously boring. Winchell is blandly handsome and is stricken with severe charisma deficit disorder. He was around 20 when the film was being shot, but looks significantly older, unable to pass for a high school student. Sure, Max executes a fine three-point landing, but a pose alone does not a hero make.

Opposite him, Villafañe’s Sofia is the ‘designated love interest’ to an almost comical degree. She’s pretty much Lana Lang from Smallville, and Villafañe resembles Kristin Kreuk too. From the moment they have their meet-cute, it’s a sure thing the pair will end up together, and Sofia’s largely undeterred by Max’s techno-organic freak-outs. “If only getting the girl were this easy in real life,” the boys in the audience will sigh, realising that Max is now almost impossible to relate to. Bello and García are both respectable actors who are slumming it here. As the stock protective mother, Bello emerges with more of her dignity intact than García’s.

Screenwriter Christopher Yost is a veteran of animated action adventure shows, with credits including the 2003 Teenage Mutant Ninja Turtles series, X-Men: Evolution, The Batman and Avengers: Earth’s Mightiest Heroes. If nothing else, those shows were generally fun. Max Steel could have done with truckloads more fun, the ‘grounded’ approach crippling what could have been an unbridled, energetic, delightfully silly kids’ action flick. The franchise-begging ending seems almost adorably naïve.

Summary: Max Steel is a rusty shell of superhero origin story clichés, bereft of excitement or originality. At the very least, it doesn’t look that cheap.