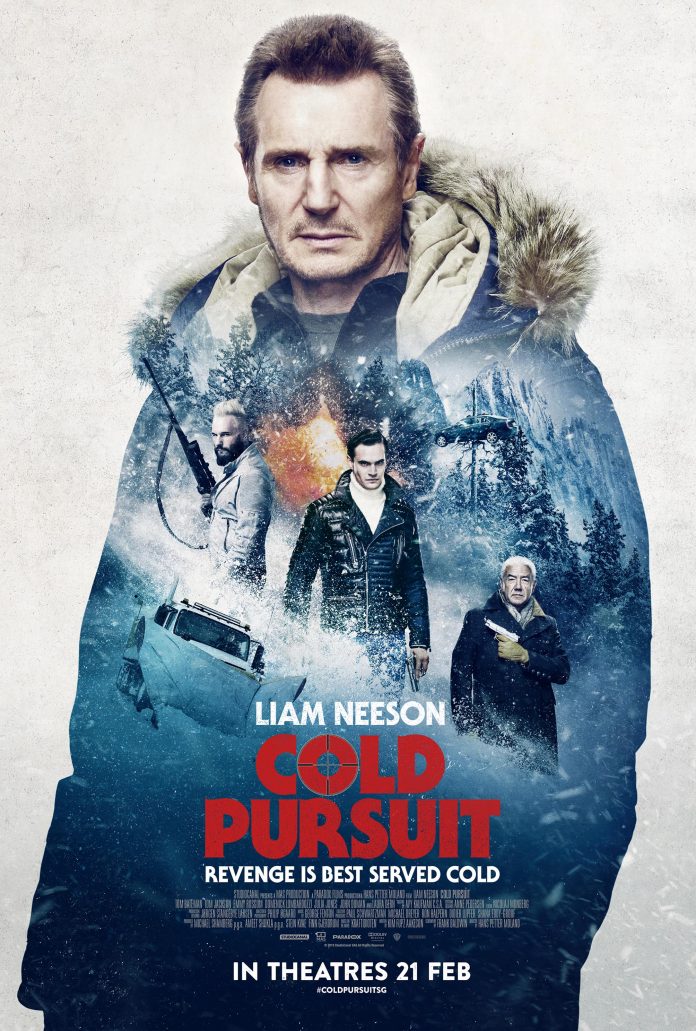 The Low-Down: Taken actor Liam Neeson stars in yet another father-exacting-revenge action B-movie, this time a remake/reboot of In Order Of Disappearance, a Norwegian film helmed by the same director — Hans Petter Moland. Cold Pursuit features some good ol’ Neeson action but also adds a tinge of dark humour, though oftentimes one too many. If you can forgive Neeson for his failed promotional comment, Cold Pursuit will surprise and entertain you with comical moments throughout the film.

The Story: Nels Coxman (Neeson) wins a Kehoe citizen of the year award for his decades of dedication in clearing snowy roads for tourists and locals alike. Meanwhile, his son Kyle (Micheál Richardson; Neeson’s real-life son) gets caught in a cocaine operation and dies from a forced overdose. Nels can’t believe Kyle is a “druggie” and starts assassinating local dealers to find the mastermind, Trevor Calcote (Tom Bateman).

The Good: Cold Pursuit is part revenge film part satire of its very own genre, which makes it a refreshing take on an overused, stale premise. Director Moland and crew take various tropes apart and exaggerate them to show how ridiculous and overused they are, often along with a death. Bateman’s performance is the clear standout here, as he portrays the entitled white-male and psychopath of a drug kingpin. He fits the role to the tee and is infinitely entertaining with his ridiculous lines and mannerisms.

The Not-So-Good: Outside of Cold Pursuit and without Neeson in the protagonist role, it’s hard to care for Nels and the Coxman family. Every character is paper thin to Cold Pursuit’s detriment — it’s hard to keep up with the names, what they stand for, causing viewers to reduce them to faceless people just there to rack up the body count. The supposedly emotional moments also fall flat, making those sequences a drag. Not to mention a few absolutely pointless characters (eg. Emmy Rossum and John Doman as Kehoe cops) that serve no purpose to the plot.

Knock-Out Sequences: Neeson’s first kill feel a lot like a meme of his own career as a vengeful assassin/hitman. We see Neeson performing more believable murders though with a lot more blood and gore. His confrontations with cartel boss’ henchmen are mostly played out for the sake of it and to push the plot forward, but the action set pieces are pretty darn entertaining.

Watch Out For: The inevitable shoot-out at the end that is cathartic for both the viewers and Nels himself.

Recommended? Yes, a fresh Neeson revenge flick that balances decent action with gruesome humour. Cold Pursuit is no Taken but is certainly an enjoyable Neeson B-movie like his recent The Passenger.

THE FAULT IN OUR STARS