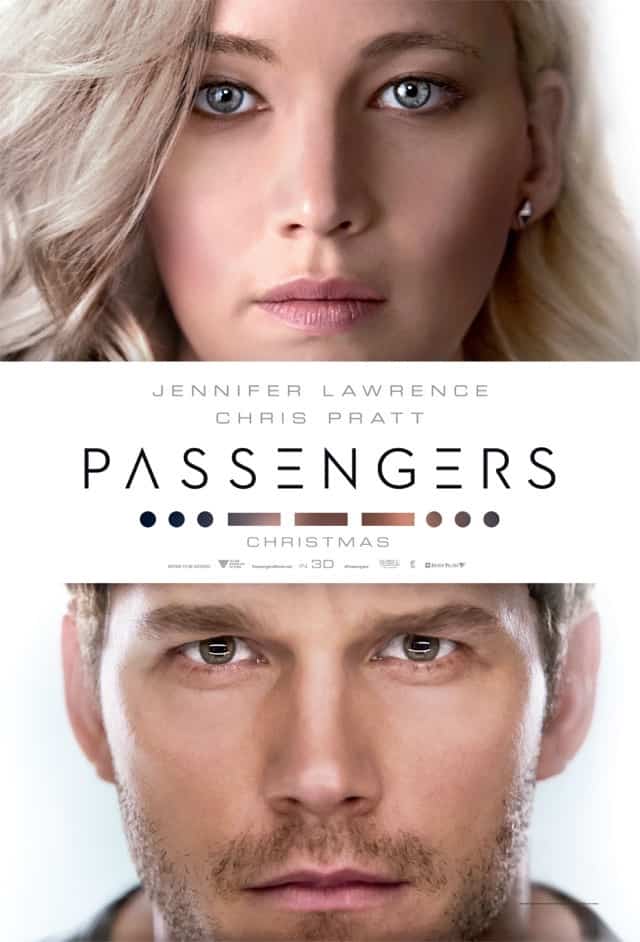 Many of us have pleaded for “five more minutes” when struggling to get out of bed in the morning. Compared to Jim Preston’s (Pratt) predicament in this sci-fi romance, that’s nothing – Jim is awoken 90 years too early. He is among the 5,000 passengers on the starship Avalon, bound for the colony planet Homestead II. A malfunction in his hibernation pod results in Jim’s 120-year-long slumber being cut short. Doomed to live out his days in solitude aboard the Avalon and with no way of returning to hibernation, Jim only has the android bartender Arthur (Sheen) for company. That is, until another passenger awakes: Aurora Lane (Lawrence), a writer from New York. Jim and Aurora fall in love – it’s not like they have too much else to do. However, the hibernation pod malfunction is only the first warning sign as it soon becomes apparent that the state-of-the-art ship is in jeopardy, putting the lives of Jim, Aurora and their fellow voyagers at risk.

Jon Spaiht’s screenplay for Passengers landed on the 2007 Black List of most-liked unproduced scripts in Hollywood, with Keanu Reeves and Reese Witherspoon once attached to the project. It’s safe to say that Lawrence and Pratt have significantly more star wattage. They were the top-earning female and male movie stars of 2014 respectively, and while making the promotional rounds, the pair has given some entertaining interviews. While there’s a novelty in the premise of a sci-fi film carried mostly by two actors, Passengers ends up feeling too familiar. With Oscar-nominated director Morten Tyldum at the helm, it is solidly assembled, but the romance central to the film borders on the simplistic. There is conflict and a rom-com-style big misunderstanding writ large, but the film relies more on its charm than its wit.

Passengers’ gleaming, futuristic aesthetic is pleasing, if not terribly ground-breaking. The corkscrew-like exterior of the Avalon is a departure from the traditional bulky star cruisers from most sci-fi media, but the interiors conform to expectations of Apple-esque sleekness. The Avalon is meant to be a space-borne luxury cruise liner, with the passengers spending the last four months before arrival to Homestead II enjoying its plush surrounds. This is one of several ways in which Passengers resembles WALL-E. Production designer Guy Hendrix Dyas, known for his work on Inception and Interstellar, does some beautiful work here and is successful in making the Avalon seem like an awesome place to spend a vacation. Infinity pools have got nothing on infinity-and-beyond-pools.

Both Lawrence and Pratt are interesting case studies in stardom. It’s affected the former more than the latter so far, but there are large swathes of moviegoers who find themselves put off by a perceived sense of ‘trying too hard’ projected by both actors. Lawrence has spoken up about pay inequality after being paid less than her male co-stars in American Hustle, and secured a $20 million salary for Passengers – $8 million more than Pratt, despite Pratt having more screen time. Behind-the-scenes politics aside, they do make for perfectly-matched romantic leads, and their immense chemistry helps the film overcome some contrived moments of character development. Rodrigo Pietro’s cinematography also makes them both look more glamorous than ever.

Michael Sheen’s Arthur the android bartender deliberately invokes Lloyd, the ghostly bartender in The Shining. The character is a clever creation, Arthur’s polite friendliness belying an unsettling uncanny valley vibe. Despite its fantastical setting, the film’s depiction of loneliness and despair resulting from isolation and the desire for meaningful companionship is relatable, if not exactly profound.

Thomas Newman’s score is frequently guilty of being too obvious and intrusive, loudly dictating what the audience should feel rather than hinting at it. It’s a bit of a shame, given how many of Newman’s scores have been lyrical and moving.

The posters for Passengers feature the ominous tagline “there’s a reason they woke up”. This reviewer was hoping for a mind-bending conclusion and an audacious reveal of a massive conspiracy that Jim and Aurora get caught up in. There are flashes of wit in Spaiht’s screenplay – why yes, Sleeping Beauty’s real name is Aurora – but when it is explained why Jim’s hibernation pod opened early, this reviewer was disappointed. Passengers promised a marriage of fiendishly clever sci-fi with a tearjerker romance, but only takes audiences part-way to that destination.

Summary: There was never any doubt that Jennifer Lawrence and Chris Pratt would work wonderfully off each other but past its sci-fi context, it’s a bit of a let-down that Passengers is as straightforward as it is.