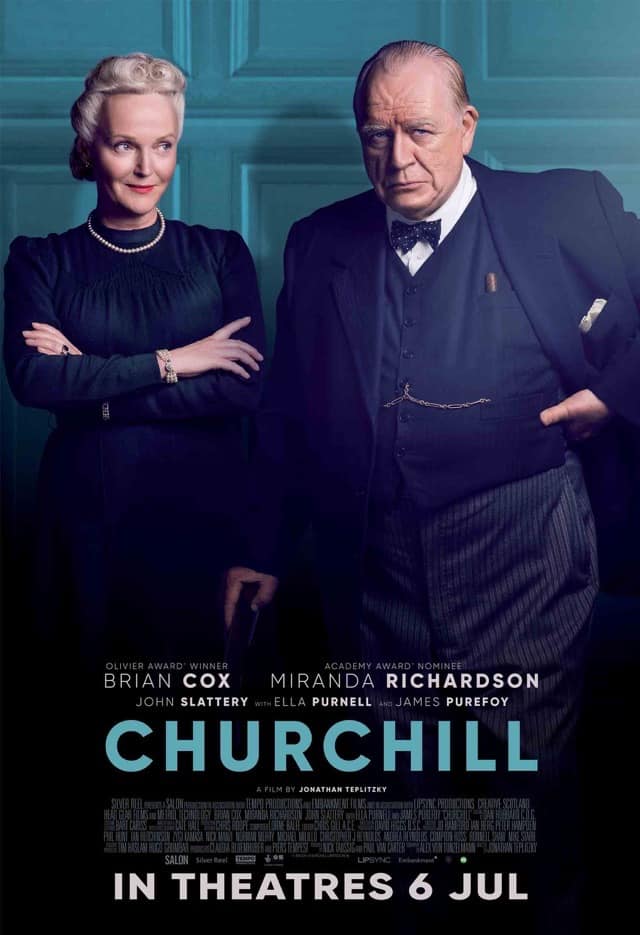 Sir Winston Churchill just might be the most iconic Briton in recent history. The wartime Prime Minister has become a nigh-mythic figure, and it’s easy to see why filmmakers are drawn to telling his story. This historical drama focuses on the lead-up to D-Day as the Second World War rages on. Churchill (Cox) prepares for the beach landing of allied forces in France, meeting with American general Dwight D. Eisenhower (Slattery), Field Marshal Bernard Montgomery (Wadham) and other high-ranking personnel in the allied command. Churchill fears a repeat of the horrifically botched beach landing he oversaw during the First World War, and he takes his anxieties and frustrations out on his wife Clementine (Richardson), who becomes increasingly concerned about Churchill’s ability to deal with the pressure of leading the country through the war. Depending on a multitude of factors, D-Day could turn the tide for the allies or lead to tragic consequences. Churchill must call on his fortitude and decisiveness, when the troops and civillians need it the most.

Churchill is directed by Jonathan Teplitzky, who told a markedly different World War II story with The Railway Man. Teplitzky works from a screenplay by British historian Alex von Tunzelmann. Going into Churchill, one knows what to expect: a reverential, respectable historical drama, but one that might be a chore to sit through. While there is an attempt to humanise the titular historical figure, Churchill ends up as a stodgy and inaccessible piece of work. The official synopsis for the film describes it as a “ticking-clock thriller”, but despite the incredibly high stakes in play, Churchill lacks urgency or momentum. As a result, the audience feels like they’re watching events unfold from a distance, rather than engaging with them.

Many great actors have played the steadfast British Bulldog, and Cox proves himself to be up to the task, having already accumulated a respectable body of work. Because a particular image of Churchill is so ingrained in the public consciousness, actors have to work extra hard to push past the caricature of an unyielding, principled curmudgeon. While Cox does what he can with the material, his portrayal of Churchill isn’t as indelible as John Lithgow’s recent turn in the Netflix series The Crown. Granted, Lithgow played Churchill at a slightly later stage in his life, but he evinced the inner conflicts roiling beneath the brickwork exterior better than Cox does.

In addition to being a historical drama, Churchill wants to be an unconventional romance. Richardson’s Clementine is often the only one in the room who can stand up to Churchill or even try to talk him down – after all, as his wife, Clementine has had years of experience. Richardson achieves a lot with just a glance, and we wish she were in more of the film. Unfortunately, the dramatic moments between the couple seem contrived and predictable, and while Churchill’s outbursts are violent and dramatic, there isn’t enough emotional heft behind them.

The supporting cast is fine, with Slattery a standout as a dashing, serious and commanding Eisenhower. Purefoy is an appropriately sweet, if slightly bland, King George VI. Ella Purnell plays the requisite audience identification character, the fictional secretary Helen Garrett. Churchill harshly berates her when she makes a spacing error in typing up a document, but one knows it’s going to build up to Churchill eventually treating the young woman with kindness, as she wells up with admiration for the great man. It’s a forgivable cliché, but a cliché all the same.

The best historical dramas transcend the niggling feeling that one is fidgeting in the back of the classroom during history period. Alas, Churchill does not overcome this. While there are snatches of clever repartee between the characters, and a smattering of powerful imagery, Churchill feels circuitous and unnecessary instead of illuminating or compelling.

Summary: A bog-standard historical biopic, Churchill features Cox giving it his best shot to play the iconic Briton, but it fails to drum up much urgency or strike an emotional chord.